Zinc Phosphate is an inorganic compound with the chemical formula Zn3(PO4)2. Zinc Phosphate is widely used as a corrosion-resistant coating applied on metal surfaces which are put as primer pigment or as a part of electroplating. When compared to bare metal, the Zinc Phosphate coats better on a crystalline structure. So seeding agent such as sodium pyrophosphate is frequently used as a pre-treatment. The other names for Zinc Phosphate are Trizinc phosphate, Zinc orthophosphate, and Trizinc diphosphate. It is prepared by mixing powders of Magnesium oxide (MgO) and Zinc oxide (ZnO) consisting of a liquid principally of water, phosphoric acid, and buffers. The different forms of Zinc Phosphate are minerals such as hopeite, parahopeite, and tarbuttite. It originated from zinc phosphate cement. 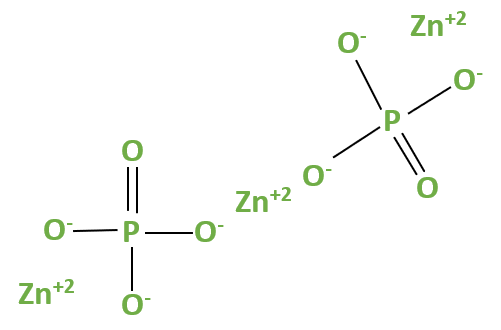 Question 1: What happens when Zinc Phosphate is eaten?

When zinc phosphate is eaten, the acid present in the stomach makes it release the toxic gas phosphine. The phosphine in the stomach crosses into the body cells and stops the cells from energy production and even leads to die the cells. It mainly targets cells of lungs, liver and heart.

Question 3: What are the symptoms when exposed to Zinc Phosphate?

The major symptoms include headache, breathing problems, vomiting and dizziness. When exposed to excessive quantities then it may cause problems like liver and kidney failure, coma and delirium.

Question 4: What happens to Zinc Phosphate when it is exposed to the environment?

Question 5: How to prepare Zinc Phosphate?

Zn3(PO4)2 is prepared by mixing powders of Magnesium oxide (MgO) and Zinc oxide (ZnO) consisting of a liquid principally of water, phosphoric acid, and buffers.

Zinc phosphate is used as corrosion resistant because it inhibit the anode process of metal corrosion and enhance the wet adhesion of the coating and prevent the horizontal diffusion of the corrosive medium into the metal interface and slow down the disbonding of Zinc phosphate coating.