The ggplot2 package is a powerful and widely used package for graphic visualization. It can be used to provide a lot of aesthetic mappings to the plotted graphs. This package is widely available in R. The package can be downloaded and installed into the working space using the following command :

The ggplot method can be used to create a ggplot object. The graphical object is used to create plots by providing the data and its respective points. The data can be plotted using both points as well as lines.

data – The data to be plotted
aes – The aesthetic mappings

The geom_point method can be used to plot the data points on the existing visualization that has been created. The color has been assigned based on the grouping values assigned in the col2 of the data plane in the following code snippet. That is since there are three groups a, b, and c three different colors are used to denote the values contained in these three groups. These parameters are specified in the aesthetic mappings, as discussed above in the ggplot method. 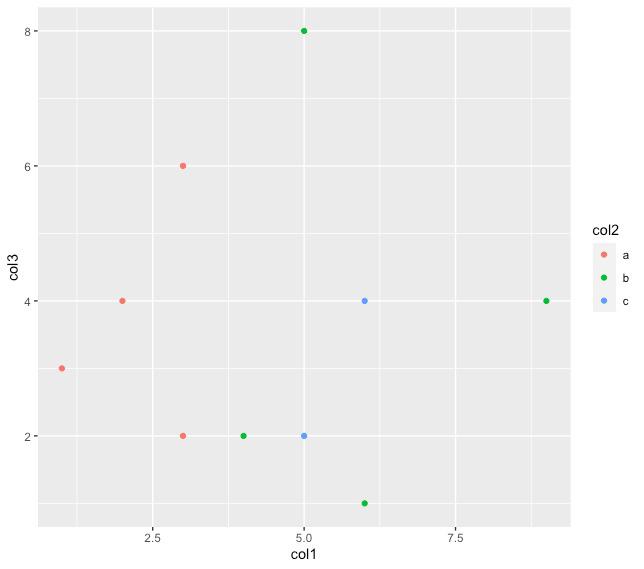 Assigning labels to the axes

For x-axis : xlab(title of x-axis)

For y-axis : ylab(title of y-axis) 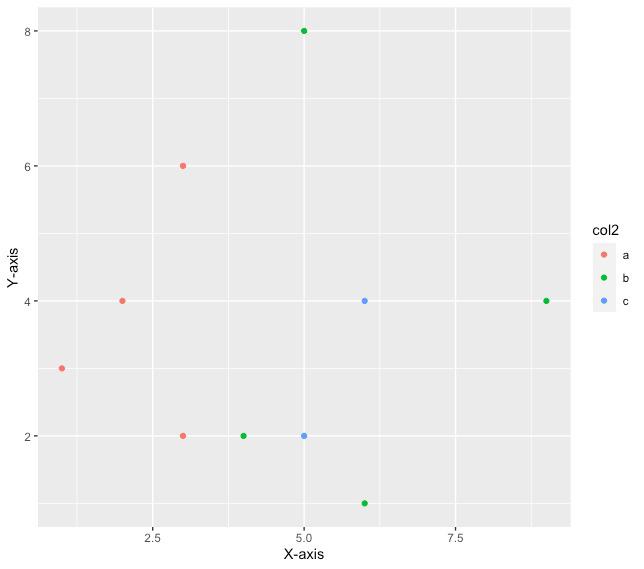 The plot that has been created using the ggplot2 method can also be annotated with various text items and their corresponding positions can be specified. For example, the text point at any respective coordinates of the x-cord and y-cord can be used to be labeled by a specific text value in the following code snippet the data point at the location 5,2 is labeled with the name “PT1”. The annotate method has the following syntax.

x-the x coordinate where the x is annotated

label-the label to be assigned at these coordinates 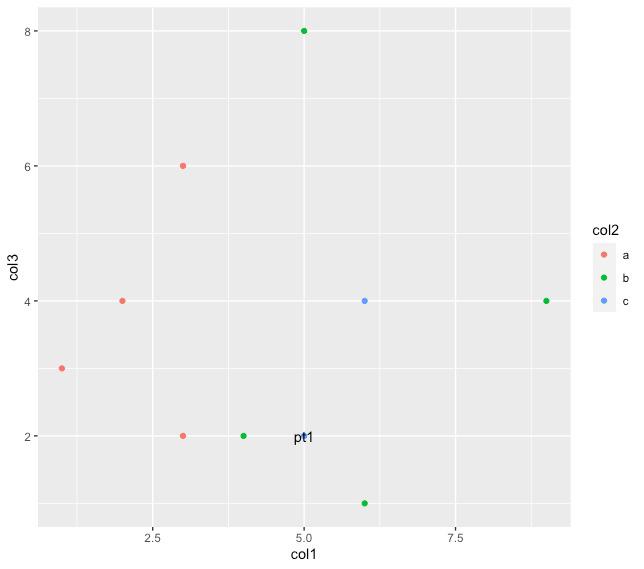 Annotating the Graph with the plotted area

The graph can also be plotted with a rectangular area or a square area depending on the x-coordinates starting and ending as well as y-coordinates starting and ending. In order to construct a rectangle or a square over that area. Depending upon the respective area that is enclosed within it. The same annotate method can be used with the first parameter specifying “rect” instead of text. In order to plot a rectangle, we can use the following syntax

In the following code snippet, a rectangle is plotted starting from the x coordinates to till the value of 7 and y coordinates between 1.5 to 4.5 respectively. 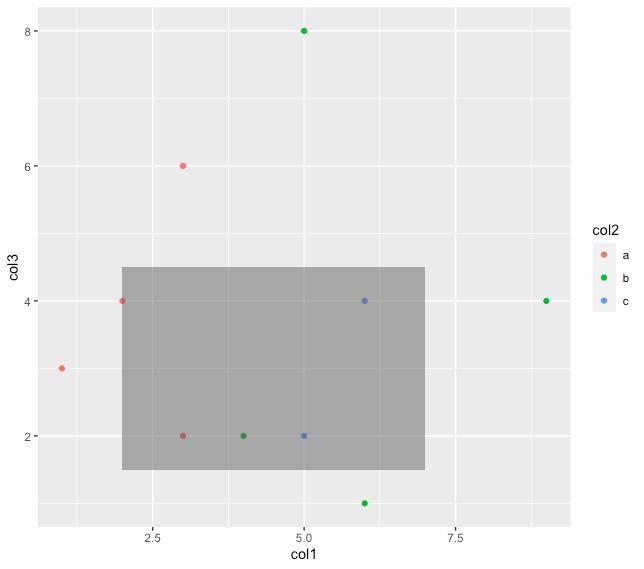 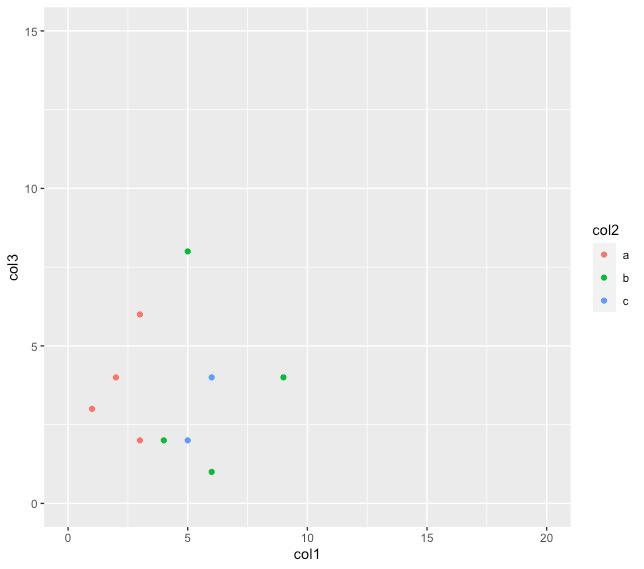 The plot that has been plotted using the ggplot2 package can also be beautified and customized further in order to increase the readability and in order to make it more presentable. For example, the titles of the axis can be aligned to a particular angle and given a particular color for example, in the following code snippet we are using the color red to denote the axis title for the x-axis and orange to denote the y-axis title respectively. We’ve also increased the size in order to enhance the readability of the axis title and the angles at which these texts are written have also been changed. This can be done using the theme method. In R, the theme method takes various arguments in order to set up the appearance of the specified parameter. The theme method has the following

angle – angle of placing the text at

size – size of the text 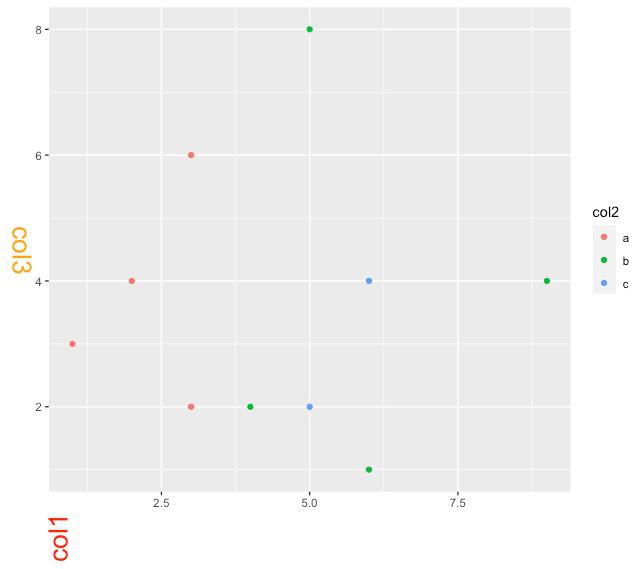 Modifying the appearance of axes labels

The theme method can also be modified to use to modify the appearance of the axis labels by just using axes.text as a parameter, as the first argument of this method. The parameters color and angle can be changed for axes labels also. 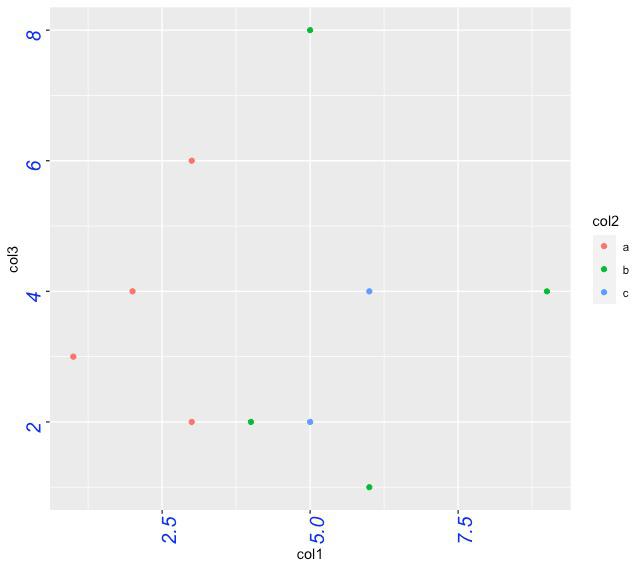 Previous
Aggregating and analyzing data with dplyr | R Language
Next
How to Use dplyr to Generate a Frequency Table in R
Related Articles
1. Set Axis Limits of ggplot2 Facet Plot in R - ggplot2
2. Working with Legends in R using ggplot2
3. Changing Font Size and Direction of Axes Text in ggplot2 in R
4. Draw ggplot2 plot with two Y-axes on each side and different scales in R
5. Set Origin of ggplot2 Plot Axes to Zero in R
6. Visualizing clusters using Hull Plots in ggplot2 using ggforce
7. Create Multiple Pie Charts using ggplot2 in R
8. How to change background color in R using ggplot2?
9. Normal Probability Plot in R using ggplot2
10. How to create boxplot using ggplot2 without whiskers in R?
Article Contributed By :