A Servlet is an instance of a class that implements javax.servlet.Servlet. Most Servlets, however, are extended to one of the standard implementations of that interface, as it namely javax.servlet.GenericServlet and the javax.servlet.http.HttpServlet. Developers use this as a blueprint when crafting their Servlets code. Implementing the Servlet’s interface or extending the GenericServlet/HttpServlet class provides a framework for creating a Servlet as well as significant default functionality to it. The Servlet’s code spec must override at least one method when any custom functionality is being implemented.

In order to initialize the Servlet, the Web server:

Any Java-enabled Web server automatically invokes the Servlet’s service() in response to a client request. This means when a Servlet is initialized, its service ( ServletRequest request, ServletResponse response) is called for every request to the Servlet. Hence, service() must be overridden to provide customized functionality the moment a Servlet is invoked. However, if the Servlet developer chooses not to override the service(), there are other methods that can be invoked in response to a client’s request to it. When the Servlet needs to be unloaded, for example, because a new version should be loaded or the server is shutting down, destroy() is called. Based on this brief Explanation, a skeleton of a common Servlet has been constructed. For simplicity, A skeleton of Servlet that follows does not include parameters passed to its methods are or exception handling code for any exceptions that are thrown:


Every Servlet engine must adhere to the Servlet lifecycle.

In order to initialize the Servlet, the Servlet engine firstly locates its class. A Servlet class can reside on the local file system, and a remote file system or be on some other network resource. The Servlet’s engine uses a usual Java class to load facilities to load the Servlet class into the JVM. Once loaded, the Servlet engine instantiates an instance of that servlet class [and the other classes which are referenced by the Servlet]. After that, it will be Calls Servlet init(ServletConfig config). The init() is called immediately after the Servers constructs the Servlet’s instance. Thus, Depending on the server and its configuration, this can be called at any of such following cases:

init() is declared as follows:

During initialization, the Servlet has to access two objects:

This is because to init() an object of ServletConfig is passed as a parameter. When a Servlet is set up for the first time, the configuration data such as information about the parameters and references to the ServletContext is stored in the ServletConfig object. The Following the common tasks that can be implemented by overriding init() of Servlet interface:

A Servlet that cannot complete its initialization process throws UnavailableException, Thus, Only after the completion of Initialization, will the server be ready for the client requests to handle [ i.e. before service() is called] or a Servlet is destroyed.

After the server loads and initializes a Servlet, Then the Servlet is able to handle the client requests. It processes them into service(). Each client’s request to service) is run in separate at Servlet thread. service() is declared as follows:

Servlets can run multiple service() at a time. It is important, therefore, hence that service() has been written in a thread-safe manner. For example, if service() updates some crucial data in the Servlet object, access to this thread should be synchronized. if for some reason, the server should not run another service() concurrently, the Servlet should implement SingleThreadModel. This interface guarantees that no two threads will execute the Servlet’s service() concurrently.

When instructed to unload the Servlet Thus, perhaps by the server’s administrator or programmatically by the Servlet’s to itself, the Servlet engine calls the Servlets to destroy(). The Servlet is then eligible for the garbage collection. All resources which were allocated in the init() should be released in a destroy(). destroy() is declared as follows:

The method is run once. The server will not be run it again until after it reloads and reinitializes the Servlet. The common tasks implemented in destroy() are:

destroy() is guaranteed to be called only once during the Servlet’s lifecycle. During a Servlet’s lifecycle, it is important to write thread-safe code for destroying the Servlet, and unless the Servlet implements SingleThreadModel, servicing client requests. There may still be threads that execute service() when destroy() is called, so destroy() has to be thread-safe. These steps illustrate the entire lifecycle of a Servlet and are also diagrammatically represented as shown in Diagram 1. 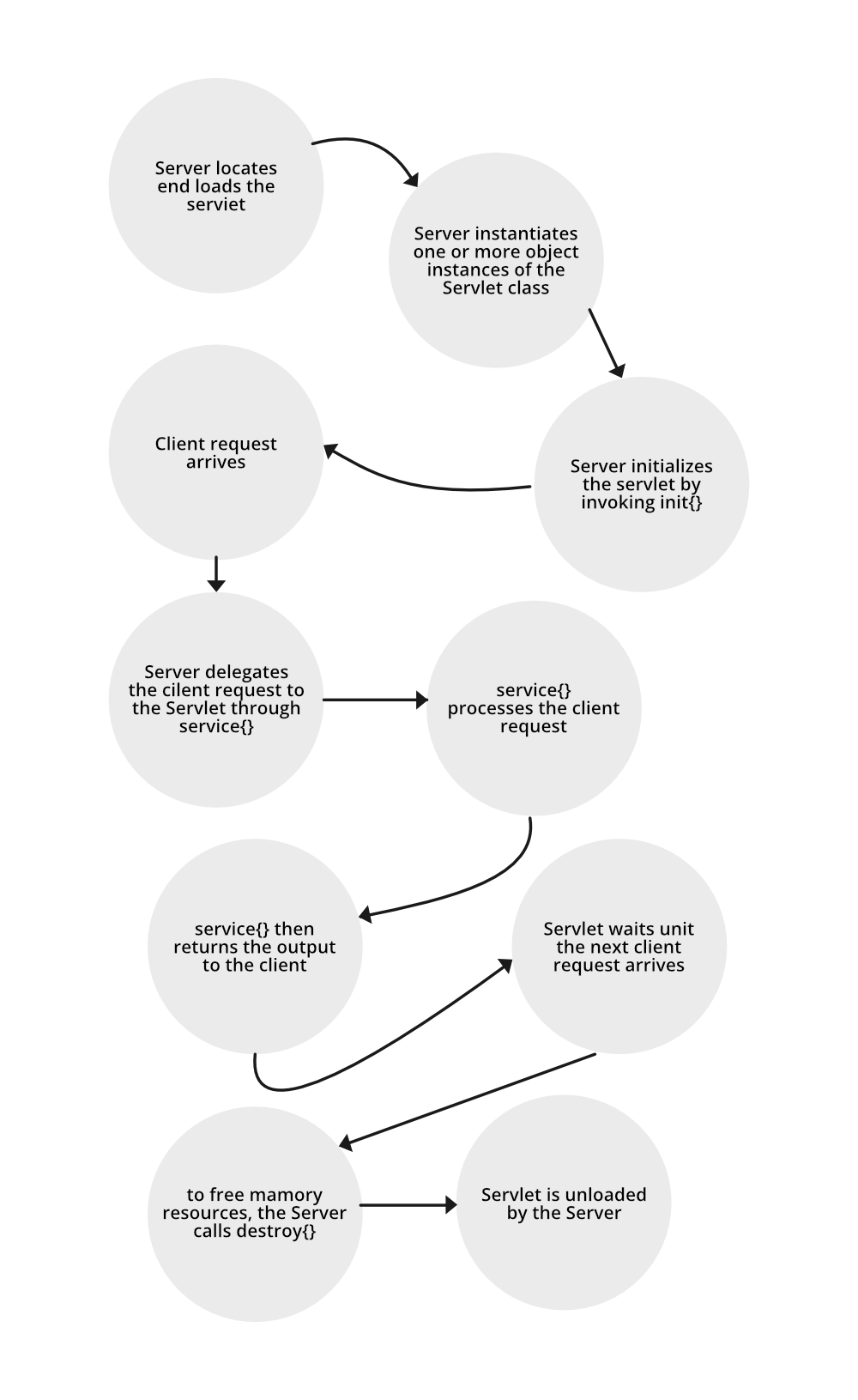