Which is first argument typically passed to a Node.js callback handler ?

The callback handler functions follow the error-first convention that is:

Step 2:  Create a folder for your project and cd (change directory) into it. Create a new file named app.js inside that folder. Now, initialize a new Node.js project with default configurations using the following command.

Project Structure: After following the steps your project structure will look like the following. 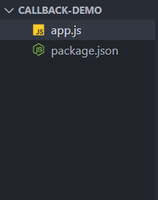 Example: In the code example mentioned below, we have created a function that performs the divide operation. To simulate an asynchronous operation we have used the setTimeout() method which calls the callback handler after one second. The callback handler is called with the error Instance as the only argument when the divisor is zero otherwise callback is called with null as the first argument and the result of division as the second argument.


Step to run the application: You can execute your app.js file using the following command on the command line.