Both CPU Cache and TLB are hardware used in microprocessors but what’s the difference, especially when someone says that TLB is also a type of Cache?

First thing first. CPU Cache is a fast memory that is used to improve the latency of fetching information from Main memory (RAM) to CPU registers. So CPU Cache sits between Main memory and CPU. And this cache stores information temporarily so that the next access to the same information is faster. A CPU cache which used to store executable instructions, it’s called Instruction Cache (I-Cache). A CPU cache is used to store data, it’s called Data Cache (D-Cache). So I-Cache and D-cache speed up fetching time for instructions and data respectively. A modern processor contains both I-Cache and D-Cache. For completeness, let us discuss D-cache hierarchy as well. D-Cache is typically organized in a hierarchy i.e. Level 1 data cache, Level 2 data cache, etc. It should be noted that L1 D-cache is faster/smaller/costlier as compared to L2 D-Cache. But the basic idea of ‘CPU cache‘ is to speed up instruction/data fetch time from Main memory to CPU.

Translation Lookaside Buffer (i.e. TLB) is required only if Virtual Memory is used by a processor. In short, TLB speeds up the translation of virtual addresses to a physical address by storing page-table in faster memory. In fact, TLB also sits between CPU and Main memory. Precisely speaking, TLB is used by MMU when a virtual address needs to be translated to a physical address. By keeping this mapping of virtual-physical addresses in fast memory, access to page-table improves. It should be noted that page-table (which itself is stored in RAM) keeps track of where virtual pages are stored in the physical memory. In that sense, TLB also can be considered as a cache of the page table.

But the scope of operation for TLB and CPU Cache is different. TLB is about ‘speeding up address translation for Virtual memory’ so that page-table needn’t be accessed for every address. CPU Cache is about ‘speeding up main memory access latency’ so that RAM isn’t accessed always by the CPU. TLB operation comes at the time of address translation by MMU while CPU cache operation comes at the time of memory access by CPU. In fact, any modern processor deploys all I-Cache, L1 & L2 D-Cache, and TLB. 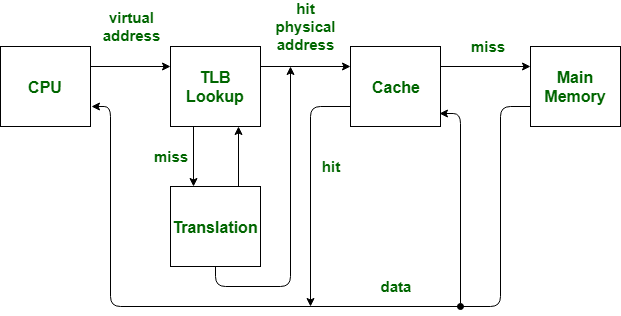 Let us understand this in a Tabular Form -:

Please do Like/Share if you find the above useful. Also, please do leave us a comment for further clarification or info. We would love to help and learn 🙂