What is Task Assignment Approach in Distributed System?

A Distributed System is a Network of Machines that can exchange information with each other through Message-passing. It can be very useful as it helps in resource sharing. In this article, we will see the concept of the Task Assignment Approach in Distributed systems.

Multiple resources are available in the distributed system so there is a need for system transparency for the user. There can be a logical or a physical resource in the system. For example, data files in sharing mode, Central Processing Unit (CPU), etc.

As the name implies, the task assignment approach is based on the division of the process into multiple tasks. These tasks are assigned to appropriate processors to improve performance and efficiency. This approach has a major setback in that it needs prior knowledge about the features of all the participating processes. Furthermore, it does not take into account the dynamically changing state of the system. This approach’s major objective is to allocate tasks of a single process in the best possible manner as it is based on the division of tasks in a system. For that, there is a need to identify the optimal policy for its implementation.

In the working of the Task Assignment Approach, the following are the assumptions:

The above-mentioned goals time and again conflict. To exemplify, let us consider the goal-1 using which all the tasks of a process need to be allocated to a single node for reducing the Inter-Process Communication (IPC) Cost. If we consider goal-4 which is based on the efficient utilization of system resources that implies all the tasks of a process to be divided and processed by appropriate nodes in a system.

Note: The possible number of assignments of tasks to nodes:

But in practice, the possible number of assignments of tasks to nodes < m x n because of the constraint for allocation of tasks to the appropriate nodes in a system due to their particular requirements like memory space, etc.

Need for Task Assignment in a Distributed System:

Cost of Execution in Serial Assignment:

Cost of Communication in Serial Assignment:

Cost of Execution in Optimal Assignment:

Cost of Communication in Optimal Assignment:

Cutset: The cutset of a graph refers to the set of edges that when removed makes the graph disconnected.

Minimal Cutset: The minimal cutset of a graph refers to the cut which is minimum among all the cuts of the graph. 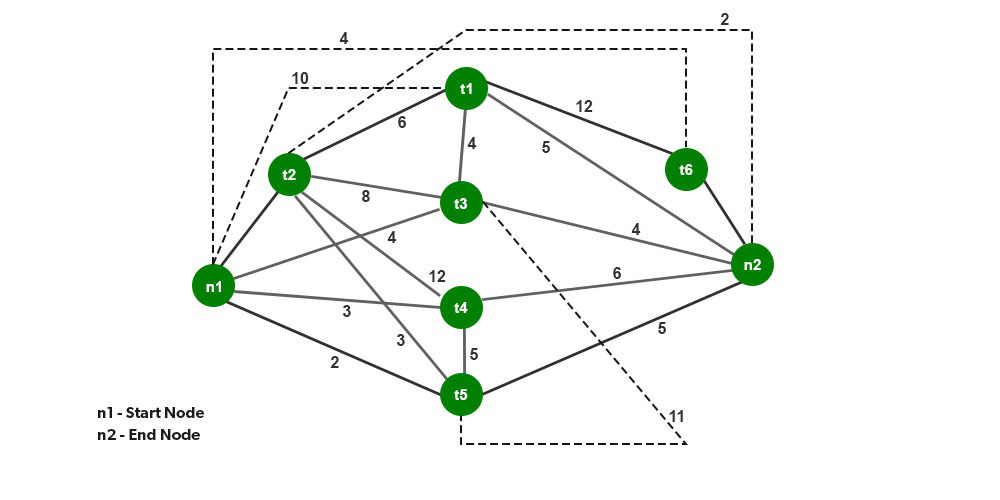