What is SSL/TLS Handshake?

Network security is important for office, home, and business networks. The problem is at the utmost places wireless communication is used or we can say the wireless network is used which are effortlessly hackable and the router can be freely exploited if not secured rightly. So there’s a need for security in the network. To fulfill this need we can use security protocols or cryptographic protocols to deliver authentication and data security.

It provides protection to the data that’s aligned between the web browser and server. SSL encrypts the link between a web server and a browser which ensures that all data passed between them stay private and separate from attack.

Transport Layer Securities (TLS) are aimed to give security at the transport layer. TLS was concluded from a security protocol called Secure Socket Layer (SSL). TLS ensures that no third affair may overhear or tampers with any communication.

What is the difference between SSL and TLS protocols?

There are always security issues between client and host so Secure Socket Layer and Transport Layer Security are the cryptographic protocols used to provide authentication and data security between the web browser and web server and it encrypts the communication between a client and server, mainly between web browsers and web applications.

There are many differences between SSL and TLS protocols.

Secure Socket Protocol supports Fortezza Algorithms where Transport layer Protocol do not, also the versions of both protocols are very different SSL is version 3.0 and TLS is version 1.0 protocol.

What is SSL/TLS Handshake?

The SSL and TLS handshake establishes a system for SSL/TLS clients and servers to start communication between them in other words it is a negotiation between two parties on a network. Handshake Protocol is used to establish sessions. This protocol allows the client and server to verify each other by transferring a series of messages to each distance. Handshake protocol uses four phases to finalize its circle.

Steps enable the SSL or TLS client and server to communicate with each other: 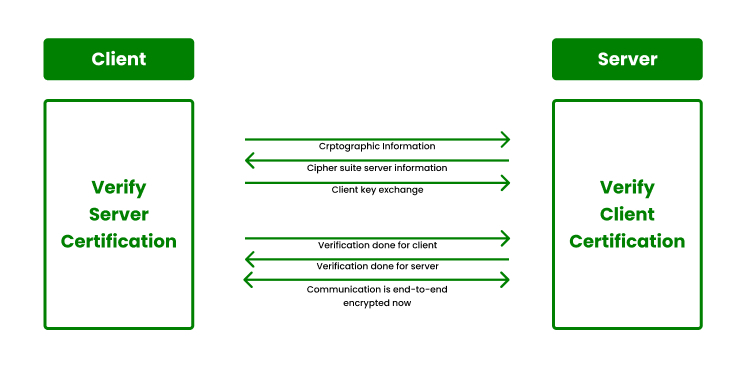 Phase-2: Server sends his certificate and Server-key-exchange. The server end phase-2 by exchanging the hello packet.

Phase-3: Verification, in this phase, the Client replies to the server by sending his certificate and Client-exchange-key.

Phase-4: In this phase, the Change Cipher suite is passed and all the verifications and security checks are done after this Handshake Protocol ends.

What is Cipher Suite?

A Cipher suite is a set of encryption rules that decides how the TLS handshake works. TLS/SSL protocols use some algorithms from a cipher suite to generate keys and encrypt information so that the communication is end-to-end encrypted.