What is Snapshot Isolation?

The isolation levels in DBMS are used to maintain concurrent execution of transactions without facing interruption through problems like dirty read, phantom read, and non-repeatable read. Snapshot isolation is one such isolation level that achieves the maximum level of concurrency.

In this article we will understand two concepts:

In SQL server row version can be defined as a data type that helps in version-stamping rows of a table with unique values. In row versioning, the SQL server stores all the older copies of a row that was modified by a transaction in the tempDB. If a particular row is modified multiple times then multiple older copies of the row would be stored in the tempdb for as long as they are required by any ongoing or forthcoming transaction.

For example: Consider a situation where a batch of six students is divided into two teams of three members each on the basis of their roll number is even or odd. Priorly, Team-1 contained students having even roll numbers, and Team-2 had students having odd roll numbers. After some time the teacher decided to change to Team-1 having odd and Team-2 having even rollnumber students. To do so two concurrent transactions are used, T1 which changes odd to even, and T2 which changes even to odd. 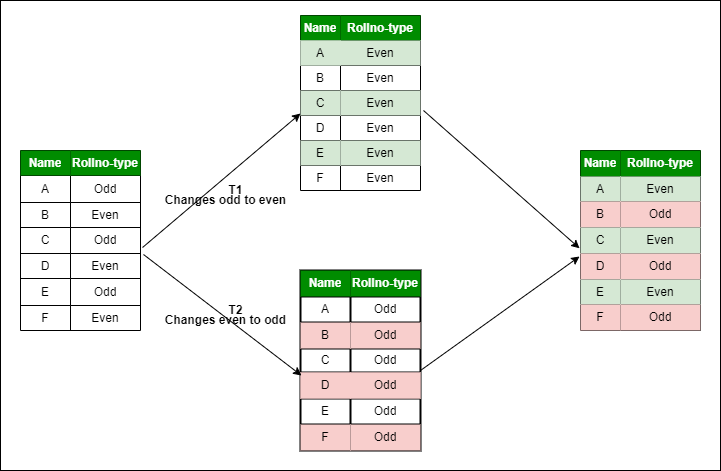 Examining the outcome of these transactions using snapshot isolation, we can notice that T1 and T2 both are working on the previous version of the database stored in the tempDB. T1 selects all the odd roll numbers and converts them to even and at the same time T2 selects the rows having even roll numbers (excluding the rows which were changed by T1 to even) and modifies them to odd. In this way, we are precisely able to switch the type of each candidate roll number

Apart from all the advantages added to the system when snapshot isolation is turned on, there are certain limitations of snapshot level as well.

Previous
How to Define a New Responsibility in Oracle Apps?
Next
What is SPX (Sequenced Packet Exchange)?
Related Articles
1. Snapshot Isolation vs Serializable
2. Transaction Isolation Levels in DBMS
3. Algorithm for Recovery and Isolation Exploiting Semantics (ARIES)
4. Difference between Backup and Snapshot
5. Storage Snapshot Technology
6. Altering and Dropping a SQL Snapshot
7. Department Store Management System(DSMS) using C++
8. Double-Pipelined Join
9. SQL vs NO SQL vs NEW SQL
10. How to Import and Export Data to Database in MySQL Workbench?
Article Contributed By :