What is Smart Contract in Solidity?

Solidity’s code is encapsulated in contracts which means a contract in Solidity is a collection of code (its functions) and data (its state) that resides at a specific address on the Ethereum blockchain. A contract is a fundamental block of building an application on Ethereum.

Pragmas are instructions to the compiler on how to treat the code. All solidity source code should start with a “version pragma” which is a declaration of the version of the solidity compiler this code should use. This helps the code from being incompatible with the future versions of the compiler which may bring changes. The above-mentioned code states that it is compatible with compilers of version greater than and equal to 0.4.16 but less than version 0.7.0.

The contract keyword declares a contract under which is the code encapsulated.

State variables are permanently stored in contract storage that is they are written in Ethereum Blockchain. The line uint setData declares a state variable called setData of type uint (unsigned integer of 256 bits). Think of it as adding a slot in a database.

This is a function named set of access modifier type public which takes a variable x of datatype uint as a parameter.
This was an example of a simple smart contract which updates the value of setData. Anyone can call the function set and overwrite the value of setData which is stored in Ethereum blockchain and there is possibly no way for anyone to stop someone from using this function. This is an example of a decentralized application that is censorship proof and unaffected to the shutdown of any centralized server. As long as someone is running a single node of Ethereum blockchain, this smart contract will be accessible.

Function get will retrieve and print the value of the state variable. 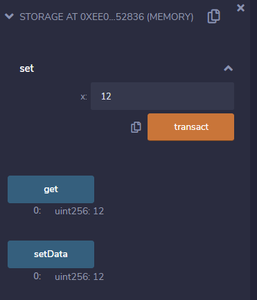 The benefits of smart contracts are as follows: