What is the use of setInterval() method in Node.js ?

The setInterval() method helps us to repeatedly execute a function after a fixed delay. It returns a unique interval ID which can later be used by the clearInterval() method which stops further repeated execution of the function.

Example 1: In this example, we will see Infinite number of function executions. 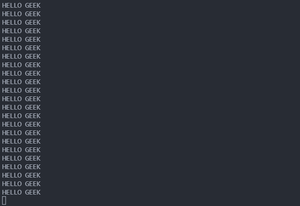 The code example mentioned below demonstrates the use of clearInterval() method to attain finite repeated executions of the function.

Example 3: In this example, we will see Using the arguments passed to setInterval(). The arguments that are passed to the setInterval() method after the delay parameter are received by our function and can be used in the desired manner. The code mentioned below demonstrates it with the help of a simple code example.