What is scope in AngularJS ?

In this article, we will see what the scope is in AngularJS and how to use Scope, along with understanding its implementation through the examples.

The Scope in AngularJS is the binding part between HTML (view) and JavaScript (controller) and it is a built-in object. It contains application data and objects. It is available for both the view and the controller. It is an object with available properties and methods. There are two types of scopes in Angular JS.

How to use the Scope?

Understanding the Scope: If we see an AngularJS application that consists of:

The scope is the model and it is a JavaScript object with properties and methods which are available for both the view and the controller.

Example 1: In this example, we will see the use of the $scope object & will also see how data is transferred from the controller to the view component which is rendered by using interpolation.

Properties made by the controller can be referred to in the view.

Example 2: From the previous example, we have used only single scope, but for larger applications, which may be a section in the HTML DOM that can access certain scopes.

In the above example, there is only one scope in the example below, you will see more than one scope.

Root Scope: Root scope is a scope that is created on the HTML element which has the ng-app directive & is contained in all the applications. The availability of root scope is in the whole application. 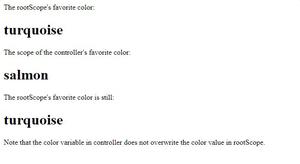 A variable named “color” exists in both the controller’s scope and the rootScope.