What is Scalable System in Distributed System?

The Scalable System in Distributed System refers to the system in which there is a possibility of extending the system as the number of users and resources grows with time.

The scalability framework is required for the applications as it refers to a software system’s ability to scale up in some way when and where required because of the changing demands of the system like increasing users or workload, etc.

How to Measure Scalability:

We can measure Scalability in terms of developing and testing the foundation of a scalable system. However, precisely measuring a system’s scalability is difficult due to scalable systems’ vast and diverse environment. The general metric method in this process is to analyze system performance improvements by loading various system resources and system loads. The system has the best scalability when the workload and computing resources are increased or lowered by a factor of K at the same time while the average response time of the system or application remains unchanged.

1. Size Scalability: There will be an increase in the size of the system whenever users and resources grow but it should not be carried out at the cost of performance and efficiency of the system. The system must respond to the user in the same manner as it was responding before scaling the system.

2. Geographical Scalability: Geographical scalability refers to the addition of new nodes in a physical space that should not affect the communication time between the nodes.

1. Horizontal Scalability: Horizontal Scalability implies the addition of new servers to the existing set of resources in the system. The major benefit lies in the scaling of the system dynamically. For example, Cassandra and MongoDB. Horizontal scaling is done in them by adding more machines. Furthermore, the load balancer is employed for distributing the load on the available servers which increases overall performance. 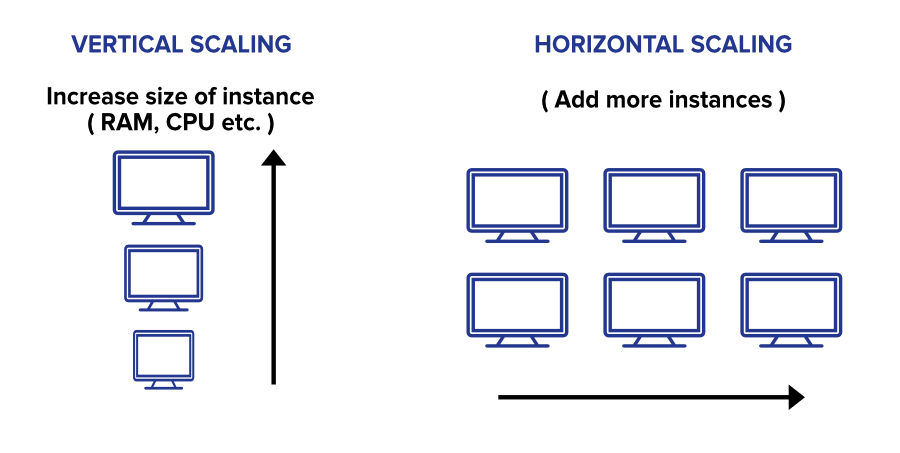 Vertical scaling must opt for low-scale applications as there is a constraint of adding unlimited CPU, RAM, and storage to a single server. But in Horizontal Scaling, no such constraint exists. The number of machines or resources can be increased to handle the load.