What is Scalability and How to achieve it – Learn System Design

Now that we have covered the basics of System Design, it is now time to dive deep into its features and components. One such very important concept in System Design is Scalability.

In system design, Scalability is the capacity of a system to adapt its performance and cost to the new changes in application and system processing demands.

The architecture used to build services, networks, and processes is scalable under these 2 conditions: 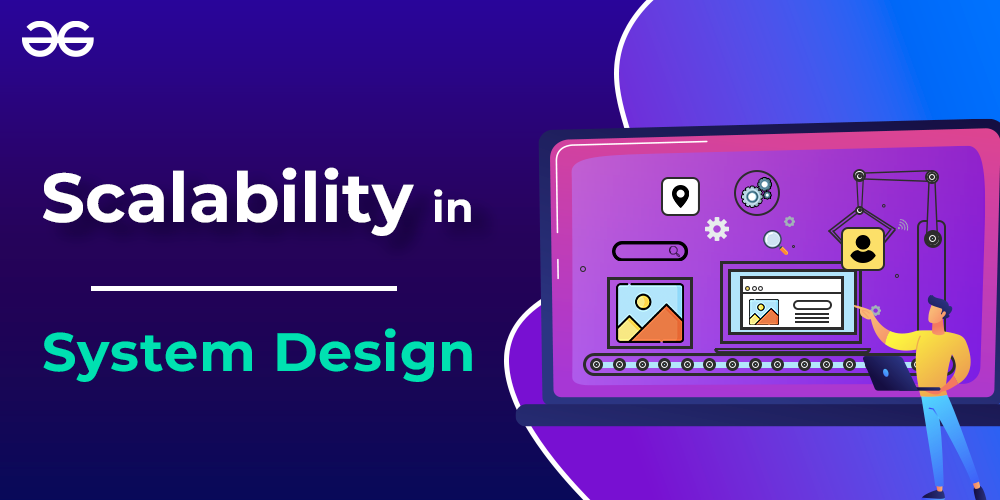 Scalability is basically a measure of how well the system will respond to the addition and omission of resources to meet our requirements. That is why we do a Requirement Analysis of the System in the first phase of SDLC and make sure the system is adaptable and scalable.

How to achieve Scalability?

Now scalability is achieved via two methods in systems: 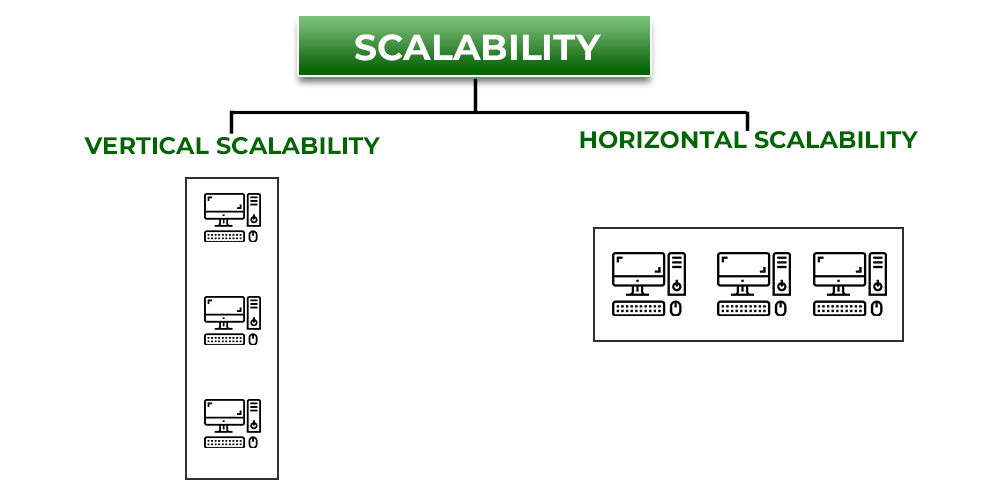 How to achieve Scalability?

Now let us discuss above two methods of scaling up systems as mentioned and showcased above to a greater order degree of depth that is as follows:

What is Vertical Scaling?

By adding more configuration or hardware for better computing or storage, vertical scaling expands the scale of a system. In actuality, this would include upgrading the processors, raising the RAM, or making other power-increasing changes. Multi-core scaling is used in this case to scale by distributing the load among the CPU and RAM resources. 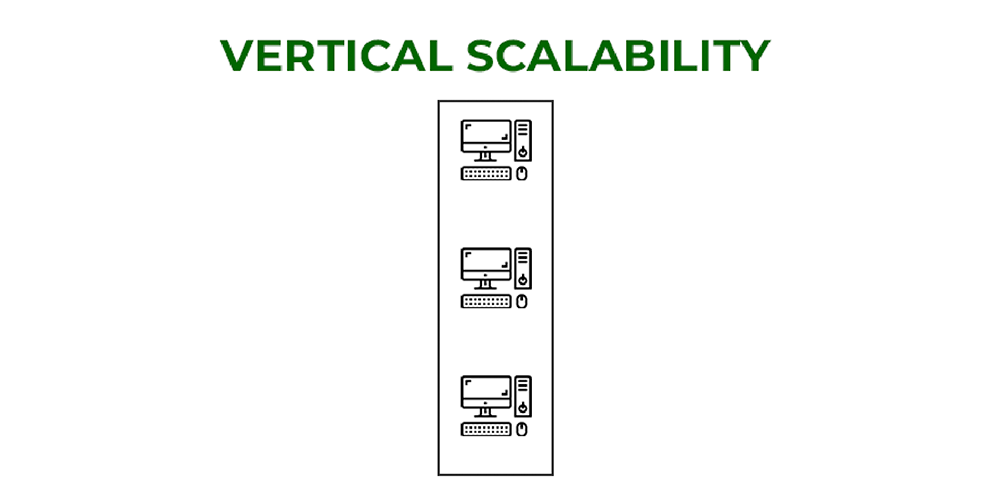 Pros Of Scaling Up Vertically

Cons Of Scaling Up Vertically

What is Horizontal Scaling?

Through the act of adding new machines, a system can be scaled horizontally. Several devices must be gathered and connected in order to handle more system requests. 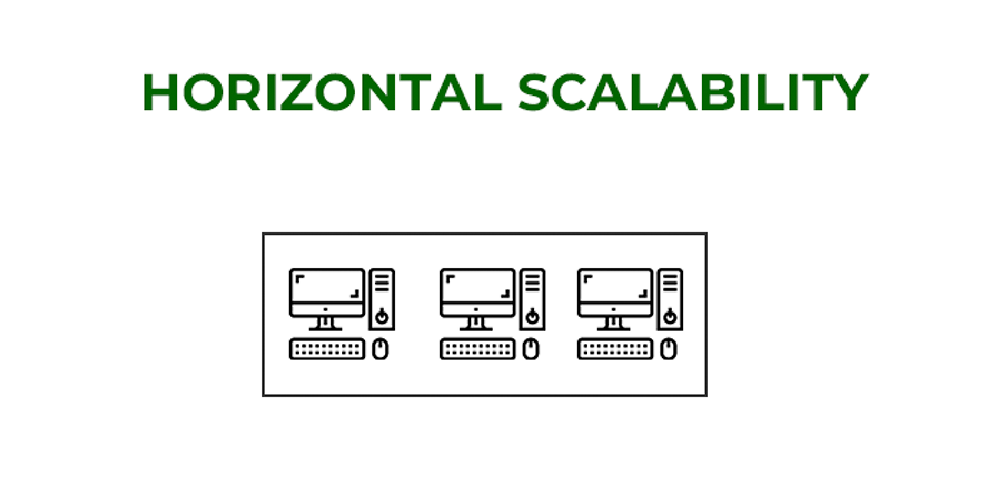 Pros Of Scaling Up Horizontal

Cons Of Scaling Up Horizontal

Remember: Scalable code is generally computation inefficient. It is bitter truth because we split big and complex code to a set of small associative operations so as to scale up horizontally because vertical scaling has a limit.

Now let us conclude both types of scaling represented below in a tabular format as follows:

Now that we have looked into the details of each type of scaling, let us compare them with respect to different parameters: 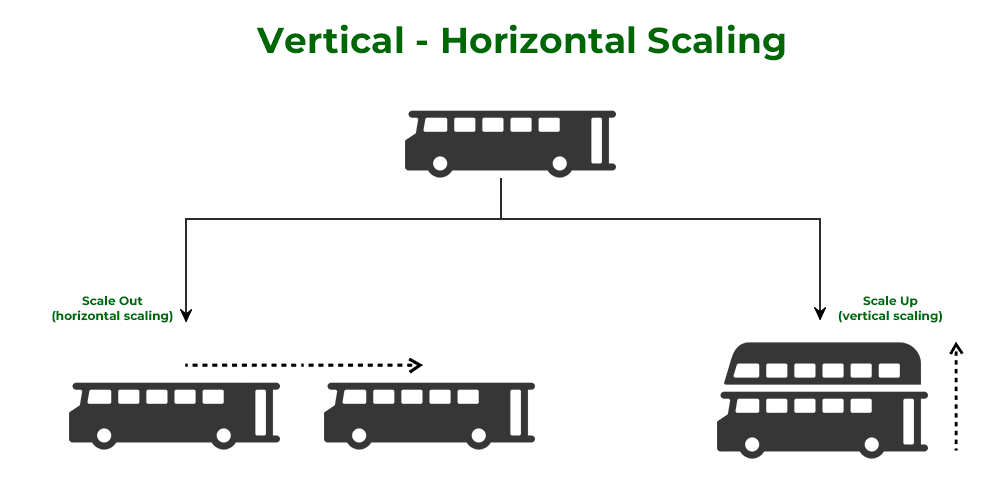 How to avoid failure during Scalability?

Now there is a catch here even if we can design a perpetual perfect system then too there arises a failure(as discussed above in Architect Principle Rules for Designing). Failures do exist for sure as mentioned above in the best-designed system but we can prevent them from hampering our system globally. This is because we keep our system redundant and our data replicated so that it is retained.

Let us now understand these terms in greater depth which are as follows:

Redundancy is nothing more than the duplication of nodes or components so that, in the event of a node or component failure, the backup node can continue to provide services to consumers. In order to sustain availability, failure recovery, or failure management, redundancy is helpful. The goal of redundancy is to create quick, effective, and accessible backup channels.

It is of two types: 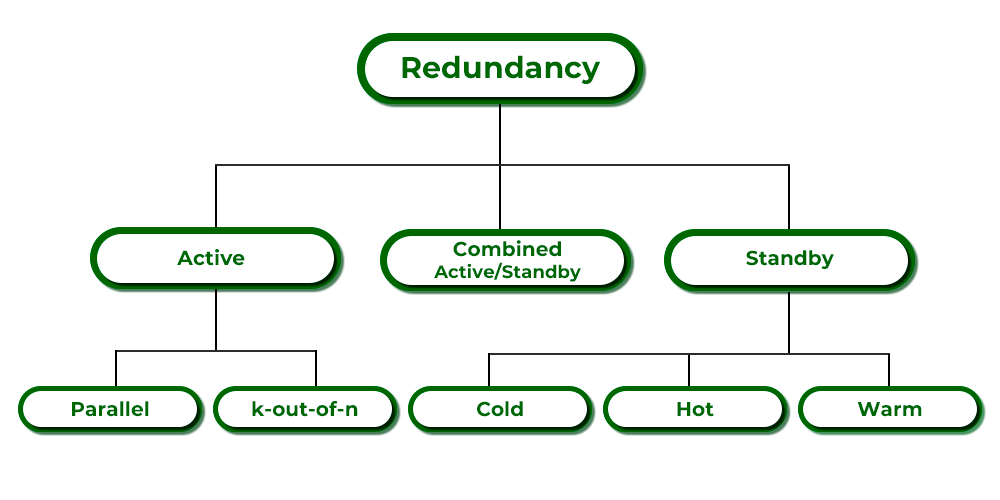 Replication is the administration of various data storage in which each component is kept in numerous copies hosted on different servers. It is simply the copying of data between many devices. It involves synchronizing various machines. Replication contributes to increased fault tolerance and reliability by ensuring consistency amongst redundant resources. 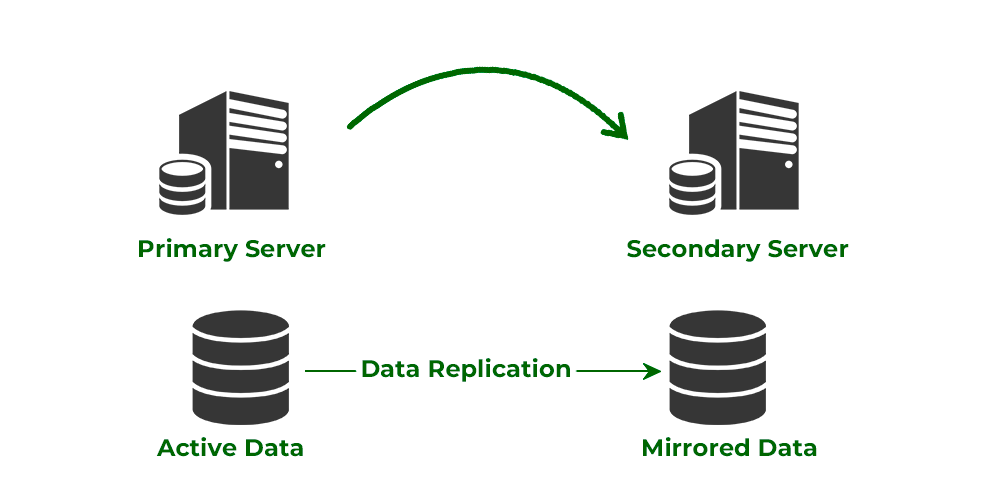 Also, it is of two types:

Tip: Till now we have achieved storing data efficiently by keeping check for efficiently storing data in servers via replication. But if we look carefully till now we only emphasis scaling systems properly but these systems are highly inefficient.

It is because we are only scaling systems keeping in check for node failure arising to Single Point Of Failure in databases (SPOF causes damage to system archietect at local and global scale) through redundancy, but not looking out for bounds  as per scaling such as:

Whenever a system is designed, the following principles should be kept in mind to tackle scalability issues:

How to handle SPOF during Scalability?

In order to make efficient systems scalable from replication parameter where there are multiple copies stored over servers handling SPOF well, here we need to learn 2 concepts listed below that aids us in achieving efficient scalable systems globally even across huge distributed system architect.

Now let us cover load balancing to a greater order degree of depth followed by caching to completely understand scalabilty to higher order degree which is as follows:

What is Load Balancing?

Load balancing It is a technique of effectively distributing application or network traffic among all nodes in a distributed system. Load balancers are the tools used to ensure load balancing. 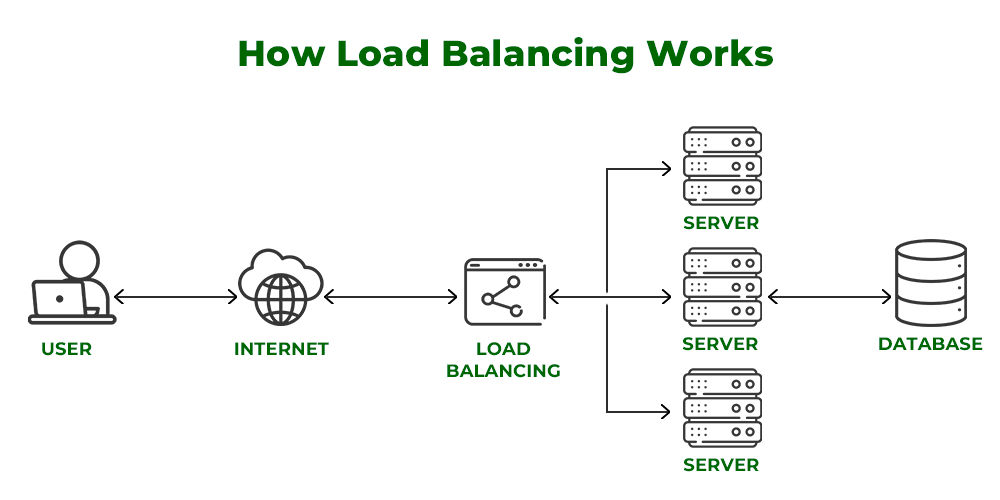 Let us also make it clear what should be the ideal conditions under which we can use a load balancer. They are as follows:

Now geeks you must be wondering out are there any pitfalls associated with load balancing.

For better understanding, we will dive to Load Balancing algorithms that are as follows:

For the effective distribution of load over various nodes or servers, various algorithms can be used. Depending on the kind of application the load balancer must be utilized for, the algorithm should be chosen.

A few load-balancing algorithms are listed below:

Now we are done with adequate knowledge of load balancing to dive into caching.

A cache is a portion of data that is generally temporarily cached by a high-speed data storage layer allowing subsequent requests for that data to be fulfilled more quickly than if the data were accessed directly from its original storage location. 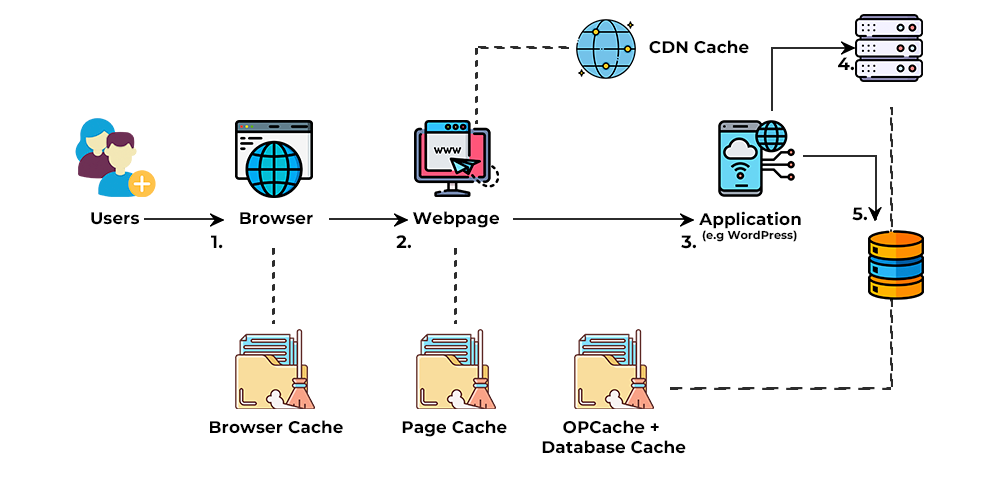 Caching is a process by which we can reuse data that has already been swiftly accessed or computed by producing a local instance of the static data, caching reduces the number of read calls, API calls, and network I/O calls.

There are basically three types of caches as follows:

How does Caching work?

The information stored in a cache is typically saved in hardware that provides quick access, such as RAM (random-access memory), but it can also be used by a software component. The main objective is to increase data retrieval performance by avoiding contact with the slower storage layer below.

Note: Applications of caching are:

Remember: When and where to use caching?

Case1: Static Data: If the data is not changing too regularly, caching would be beneficial. We can save the data and use it right away. Caching wouldn’t do much good if the data was changing quickly.

Lastly, let us discuss caching strategies to wrap up the concept of caching:

Caching patterns are what designers use to include a cache into a system. Write-through and cache-aside are two common techniques:

The eviction policy of the cache determines the order in which items are removed from a full cache. It’s done to clear some room so that more entries can be added. These policies are listed below as follows: