What is Peterson Graph?

A graph is a data structure that is defined by two components :

There is no 3-cycle or 4-cycle in the Peterson Graph. 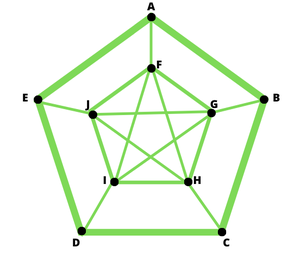 The Peterson graph is made up of the vertices and edges of a Hemi-dodecahedron, which is a dodecahedron with opposite points, lines, and faces identified together. 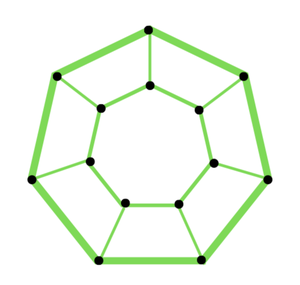 The Graph, as shown in the above figure, is not complete. Furthermore, it has an odd number of edges. As a result, it is not a bipartite graph.

As the graph has an even number of vertices, the chromatic number of the Petersen graph is 3. 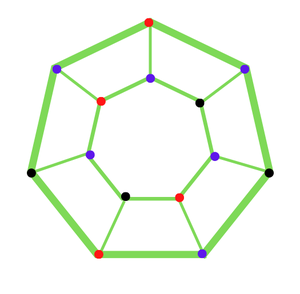 Example: Prove that Peterson’s graph is not Hamiltonian. 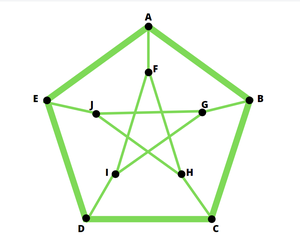 Suppose that G is the Petersen graph, and suppose to the contrary that G is hamiltonian. We label the vertices of G with the digits A, B, C, D… J. Let T = {AF, EJ, DI, CH, BG} be the subset of edges of G. Then G − T is disconnected. Thus, any Hamilton cycle of G must contain even edges in T. It is not difficult to see that any cycle containing exactly two edges in T is not hamiltonian.

Previous
Difference between ER Modeling and Dimensional Modeling
Next
Data Types in Advanced RISC Machine ( ARM7) Architecture
Related Articles
1. A Peterson Graph Problem
2. Peterson's Algorithm in Process Synchronization
3. Detect cycle in the graph using degrees of nodes of graph
4. Regular Graph in Graph Theory
5. Maximum number of edges that N-vertex graph can have such that graph is Triangle free | Mantel's Theorem
6. Java Program to Find Independent Sets in a Graph using Graph Coloring
7. Connect a graph by M edges such that the graph does not contain any cycle and Bitwise AND of connected vertices is maximum
8. Java Program to Find Independent Sets in a Graph By Graph Coloring
9. Convert the undirected graph into directed graph such that there is no path of length greater than 1
10. Convert undirected connected graph to strongly connected directed graph
Article Contributed By :