What is One Hot Design?

In the field of computer science and electronics, there are some methods, which are used to represent data in such a way, so that it can be used in machines and computers. These methods are called encoding schemes. One- hot encoding is one of those methods.

In this article, we will be discussing one-hot encoding, it’s working, the applications, etc.

One hot encoding is been used in the process of categorizing data variables so they can be used in machine learning algorithms to make some better predictions. So, what we do in one-hot encoding, is to convert each categorical value into a different column, and it gives a binary value, either 0 or 1 to each column. And each integer value represents a binary vector.

To understand it better let’s take a look at an example below:

To clear this, let’s take another example, think we have some values yellow and green. With the help of one-hot, we can give a numeric value to yellow as 0 and green as 1.

Here, once we have already given the numeric values, the next step is to create a binary vector, which shows the numeric values that we have given. Here, a vector will show 2 as the length, as we have filed 2 values.

Here, we can understand the concept by comparing the representation of the integers 0-4 in binary, gray code, and one-hot in the table given below:

One-hot encoding is been widely used in many different applications, such as electronics, machine learning, digital circuits, and so on. Some of the most common applications where one-hot is been used are

Machine learning is a method that is used in data analysis. This process includes adapting models and allowing programs to learn organically. Technically it involves the structuring of algorithms, which adopts models in order and improves their quality to make predictions.

The idea of machine learning is mainly based on the interaction between computers and human languages. It includes speech recognition and understanding,

Why One-Hot Encoding is Important in Machine Learning?

One hot encoding is a useful method and is used for the type of data that has no relation with one another. In machine learning algorithms the order of integers is preferred. In clear words, it reads the higher number as the better one, then the lower one.

Well in some cases, the given input data may not have the right order for categorical value, which can cause a problem in the performance and lead to an error in predictions.

So, to prevent these kinds of problems one-hot encoding plays a major role. To understand it more clearly, let’s see how we can convert the categorical data into numerical one.

By following the steps below, we can convert the categorical data into numerical data.

One-hot encoding can also be used in electronics, where, a voltage can be used to represent a value on an analog or digital output line.

As an example, logic gate circuits are made of a large network of interconnected “nodes” with digital inputs, which creates digital outputs. Which seems to be a better option to represent an output state without using any decoding. 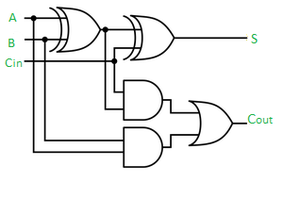 One-hot encoding is been used in a variety of different digital circuits to represent their I/O values. As an example, it can be used in representing the state of a state machine. Like-wise, if another representation is chosen, such as Grey or Binary, a decoder is needed to identify the state. But with a one-hot, state-machine does not require the decoder, as the machine is logically in the nth state if the nth bit is high.

A ring counter can be considered a good example of a finite-state machine. Where the output of one flip-flop is connected to the input of the other.

The first counter represents the first state, and the second one shows the second state and is continuous in the same way. In the beginning, every flip-flop in the machine is set to ‘0’, other than the first, which shows the value ‘1’.