What is IGMP(Internet Group Management Protocol)?

IGMP is acronym for Internet Group Management Protocol. IGMP is a communication protocol used by hosts and adjacent routers for multicasting communication with IP networks and uses the resources efficiently to transmit the message/data packets. Multicast communication can have single or multiple senders and receivers and thus, IGMP can be used in streaming videos, gaming or web conferencing tools. This protocol is used on IPv4 networks and for using this on IPv6, multicasting is managed by Multicast Listener Discovery (MLD). Like other network protocols, IGMP is used on network layer. MLDv1 is almost same in functioning as IGMPv2 and MLDv2 is almost similar to IGMPv3. The communication protocol, IGMPv1 was developed in 1989 at Stanford University. IGMPv1 was updated to IGMPv2 in year 1997 and again updated to IGMPv3 in year 2002.

Types: There are 3 versions of IGMP. These versions are backward compatible. Following are the versions of IGMP: 1. IGMPv1 : The version of IGMP communication protocol allows all the supporting hosts to join the multicast groups using membership request and include some basic features. But, host cannot leave the group on their own and have to wait for a timeout to leave the group. The message packet format in IGMPv1:

2. IGMPv2 : IGMPv2 is the revised version of IGMPv1 communication protocol. It has added functionality of leaving the multicast group using group membership. The message packet format in IGMPv2:

3. IGMPv3 : IGMPv2 was revised to IGMPv3 and added source-specific multicast and membership report aggregation. These reports are sent to 224.0.0.22. The message packet format in IGMPv3: 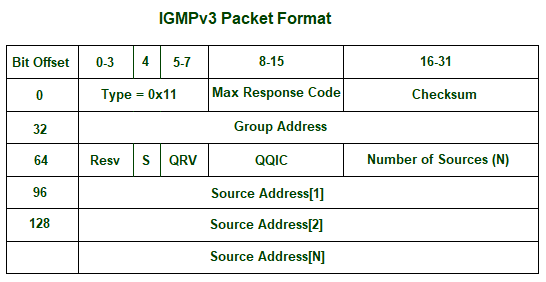