What is Global Descriptor Table

Structure :
Exactly in protected mode, in the Intel Architecture, essentially the Interrupt Service Routines and the memory management are managed by tables of descriptors. Each descriptor keeps the information about a single object, For example; a task, a service routine, a portion of data or code, etc, which the CPU may need at some time. If someone tries to fill a new value into a segment register then the CPU requires carrying out safety and access control checks to see either you are literally allowed to access that specified memory area or not. If these checks are performed successfully then useful values are cached in invisible registers of the CPU. Intel represents 3 types of tables as follows.

Note –
All the above tables are represented as a linear address, size to the CPU by the LIDT, LGDT, LLDT instructions sequentially. In most cases, the OS directly informs where those tables are at boot time and then clearly, the OS goes writing or reading the tables by a pointer.

GDT overview :
The Global Descriptor Table carries entries that tell the CPU about the memory segment. It is peculiar to the IA32 architecture.

Composition :
Here, we will understand GDT composition step by step as follows.
Step-1 :
By using the LGDT assembly instruction, the GDT is loaded. It looks for the location of a structure of GDT description. : 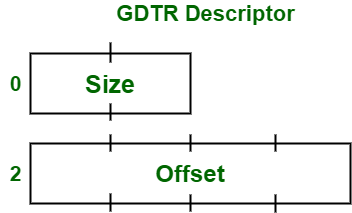 Step-3 :
The GDT contains 8-byte entries, each having a complex structure as follows.

Step-4 :
Here, Limit 0:15 means that the field carries 0-15 bits of the limit value. The base has 32 bits value which contains the linear address from where the segment starts and a 20-bit value here indicates the maximum addressable unit (which is either in 1 byte of units or in pages). Therefore, if someone selects the page granularity such as 4 KiB and then sets the limit value to 0 × FFFFF, the segment here will length 4 GiB address space. Following is the composition of flags and access byte shown as follows.

What is kept in GDT :
For the purpose of keeping balance, one should always store the following items in the GDT as follows.