What is Data Structure: Types, Classifications and Applications

What is Data Structure:

A data structure is a storage that is used to store and organize data. It is a way of arranging data on a computer so that it can be accessed and updated efficiently.

A data structure is not only used for organizing the data. It is also used for processing, retrieving, and storing data. There are different basic and advanced types of data structures that are used in almost every program or software system that has been developed. So we must have good knowledge of data structures.

What is Data Structure: Types, Classifications, and Applications 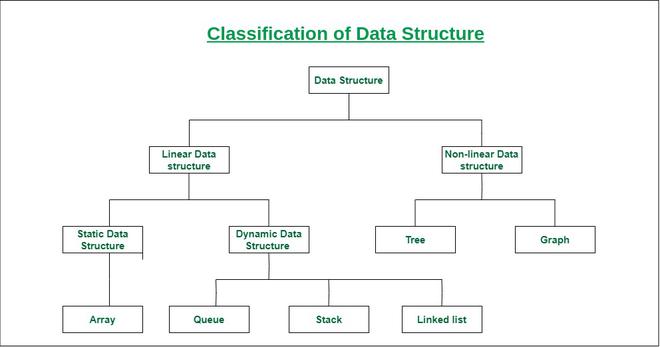 The structure of the data and the synthesis of the algorithm are relative to each other. Data presentation must be easy to understand so the developer, as well as the user, can make an efficient implementation of the operation.
Data structures provide an easy way of organizing, retrieving, managing, and storing data.
Here is a list of the needs for data.

An array is a linear data structure and it is a collection of items stored at contiguous memory locations. The idea is to store multiple items of the same type together in one place. It allows the processing of a large amount of data in a relatively short period. The first element of the array is indexed by a subscript of 0. There are different operations possible in an array, like Searching, Sorting, Inserting, Traversing, Reversing, and Deleting.

Characteristics of an Array:

An array has various characteristics which are as follows:

Different applications of an array are as follows:

Want to get started with arrays? You can try out our curated articles and lists for the best practice:

A linked list is a linear data structure in which elements are not stored at contiguous memory locations. The elements in a linked list are linked using pointers as shown in the below image:

A linked list has various characteristics which are as follows:

Different applications of linked lists are as follows:

Want to get started with a linked list? You can try out our curated articles and lists for the best practice:

Stack is a linear data structure that follows a particular order in which the operations are performed. The order is LIFO(Last in first out). Entering and retrieving data is possible from only one end. The entering and retrieving of data is also called push and pop operation in a stack. There are different operations possible in a stack like reversing a stack using recursion, Sorting, Deleting the middle element of a stack, etc.

Characteristics of a Stack:

Stack has various different characteristics which are as follows:

Different applications of Stack are as follows:

Want to get started with Stack? You can try out our curated articles and lists for the best practice:

Queue is a linear data structure that follows a particular order in which the operations are performed. The order is First In First Out(FIFO) i.e. the data item stored first will be accessed first. In this, entering and retrieving data is not done from only one end. An example of a queue is any queue of consumers for a resource where the consumer that came first is served first. Different operations are performed on a Queue like Reversing a Queue (with or without using recursion), Reversing the first K elements of a Queue, etc. A few basic operations performed In Queue are enqueue, dequeue, front, rear, etc.

Characteristics of a Queue:

The queue has various different characteristics which are as follows:

Different applications of Queue are as follows:

Want to get started with Queue? You can try out our curated articles and lists for the best practice:

A tree is a non-linear and hierarchal data structure where the elements are arranged in a tree-like structure. In a tree, the topmost node is called the root node. Each node contains some data, and data can be of any type. It consists of a central node, structural nodes, and sub-nodes which are connected via edges. Different tree data structures allow quicker and easier access to the data as it is a non-linear data structure. A tree has various terminologies like Node, Root, Edge, Height of a tree, Degree of a tree, etc.

There are different types of Tree-like

Characteristics of a Tree:

The tree has various different characteristics which are as follows:

Different applications of Tree are as follows:

Want to get started with Tree? You can try out our curated articles and lists for the best practice:

A graph is a non-linear data structure that consists of vertices (or nodes) and edges. It consists of a finite set of vertices and set of edges that connect a pair of nodes. The graph is used to solve the most challenging and complex programming problems. It has different terminologies which are Path, Degree, Adjacent vertices, Connected components, etc.

The graph has various different characteristics which are as follows:

Different applications of Graphs are as follows:

Want to get started with Graph? You can try out our curated articles and lists for the best practice:

Data structures can be found in various computer science textbooks and online resources. Some popular texts include: