CI or Continuous Integration is the practice of automating the integration of code changes from multiple developers into a single codebase. It is a software development practice where the developers commit their work frequently into the central code repository (Github or Stash). Then there are automated tools that build the newly committed code and do a code review, etc as required upon integration.

The key goals of Continuous Integration are to find and address bugs quicker, make the process of integrating code across a team of developers easier, improve software quality and reduce the time it takes to release new feature updates. Some popular CI tools are Jenkins, TeamCity, and Bamboo.

There could be scenarios when developers in a team, work in isolation for an extended period of time and only merge their changes to the master branch once their work was completed. This not only makes the merging of code very difficult, prone to conflicts, and time-consuming but also results in bugs accumulating for a long time which are only identified in later stages of development. These factors make it harder to deliver updates to customers quickly.

With Continuous Integration, developers frequently commit to a shared common repository using a version control system such as Git. A continuous integration pipeline can automatically run builds, store the artifacts, run unit tests and even conduct code reviews using tools like Sonar. We can configure the CI pipeline to be triggered every time there is a commit/merge in the codebase.

Below is a pictorial representation of a CI pipeline- the workflow from developers checking in their code to its automated build, test, and final notification of the build status. 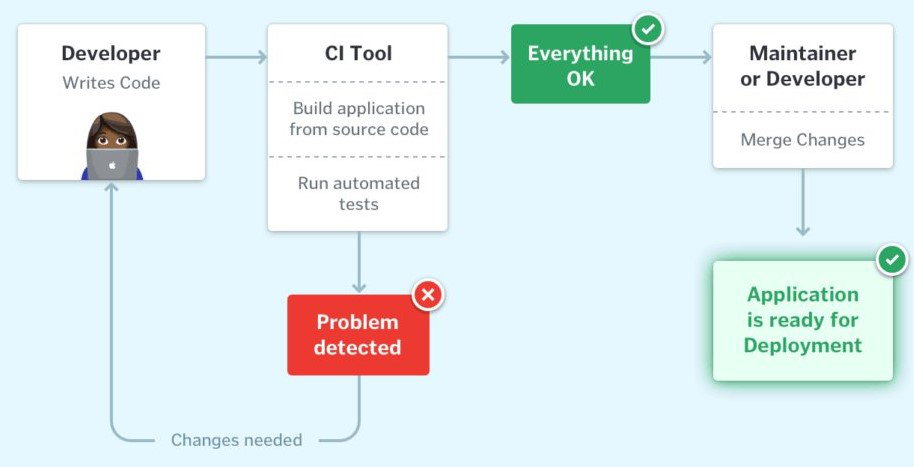 Once the developer commits their code to a version control system like Git, it triggers the CI pipeline which fetches the changes and runs automated build and unit tests. Based on the status of the step, the server then notifies the concerned developer whether the integration of the new code to the existing code base was a success or a failure.

This helps in finding and addressing the bugs much quickly, makes the team more productive by freeing the developers from manual tasks, and helps teams deliver updates to their customers more frequently. It has been found that integrating the entire development cycle can reduce the developer’s time involved by ~25 – 30%.

CD or Continuous Delivery is carried out after Continuous Integration to make sure that we can release new changes to our customers quickly in an error-free way. This includes running integration and regression tests in the staging area (similar to the production environment) so that the final release is not broken in production. It ensures to automate the release process so that we have a release-ready product at all times and we can deploy our application at any point in time.

Continuous Delivery automates the entire software release process. The final decision to deploy to a live production environment can be triggered by the developer/project lead as required. Some popular CD tools are AWS CodeDeploy, Jenkins, and GitLab.

By automating the software release process, CD contributes to low-risk releases, lower costs, better software quality, improved productivity levels, and most importantly, it helps us deliver updates to customers faster and more frequently. If Continuous Delivery is implemented properly, we will always have a deployment-ready code that has passed through a standardized test process.

How CI and CD work together?

The below image describes how Continuous Integration combined with Continuous Delivery helps quicken the software delivery process with lower risks and improved quality.

We have seen how Continuous Integration automates the process of building, testing, and packaging the source code as soon as it is committed to the code repository by the developers. Once the CI step is completed, the code is deployed to the staging environment where it undergoes further automated testing (like Acceptance testing, Regression testing, etc.). Finally, it is deployed to the production environment for the final release of the product.