What is Backend Testing?

Software Testing is the process of verifying and evaluating the entire software or application to ensure that the developed software or product is working properly as per the requirements. There are many techniques of testing, various levels of testing, and testing processes. These are all carried out in the testing phase to check the entire developed product.

The term backend generally refers to server-side deployment. Here the process is entirely happening in the backend which is not shown to the user only the expected results will be shown to the user. In every web application, there will be a backend language to accomplish the task.

What is Backend Testing?

For implementing backend testing, the backend test engineer should also have some knowledge about that particular server-side or database language. It is also known as Database Testing.

Importance of Backend Testing: Backend testing is a must because anything wrong or error happens at the server-side, it will not further proceed with that task or the output will get differed or sometimes it will also cause problems such as data loss, deadlock, etc.,

The following are the different types of backend testing:

Let’s discuss each of these types of backend testing.

Structural testing is the process of validating all the elements that are present inside the data repository and are primarily used for data storage. It involves checking the objects of front-end developments with the database mapping objects.

Types of Structural Testing: The following are the different types of structural testing:

a) Schema Testing: In this Schema Testing, the tester will check for the correctly mapped objects. This is also known as mapping testing. It ensures whether the objects of the front-end and the objects of the back-end are correctly matched or mapped. It will mainly focus on schema objects such as a table, view, indexes, clusters, etc., In this testing, the tester will find the issues of mapped objects like table, view, etc.,

b) Table and Column Testing: In this, it ensures that the table and column properties are correctly mapped.

For example, if we mention the wrong datatype for the column on the server-side which is different from the front-end then it will raise an error.

c) Key and Indexes Testing: In this, it validates the key and indexes of the columns.

d) Trigger Testing: It ensures that the executed triggers are fulfilling the required conditions of the DML transactions.

e) Stored Procedures Testing: In this, the tester checks for the correctness of the stored procedure results.

f) Database Server Validation Testing: It validates the database configuration details as per the requirements.

For Example, If wrong user authentication is given, it will raise an error.

Functional Testing is the process of validating that the transactions and operations made by the end-users meet the requirements.

Types of Functional Testing: The following are the different types of functional testing:

Non-functional testing is the process of performing load testing, stress testing, and checking minimum system requirements are required to meet the requirements. It will also detect risks, and errors and optimize the performance of the database. 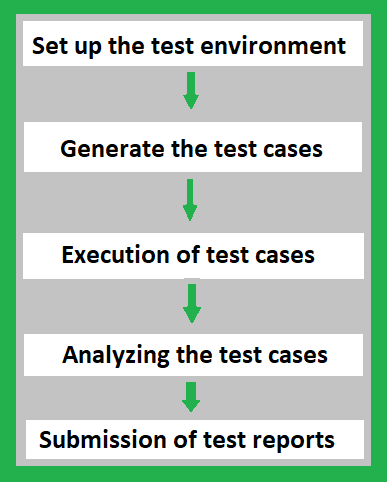 1. Set up the Test Environment: When the coding process is done for the application, set up the test environment by choosing a proper testing tool for back-end testing. It includes choosing the right team to test the entire back-end environment with a proper schedule. Record all the testing processes in the documents or update them in software to keep track of all the processes.

4. Analyzing the Test Cases: After the execution of test cases, it highlights the result of all the test cases whether it has been executed successfully or not. If an error occurs in the test cases, it will highlight where the particular error is formed or raised, and in some cases, the automation tool will give hints regarding the issues to solve the error. The tester or Quality Analyst should analyze the code again and fix the issues if an error occurred.

The following are some of the factors for backend testing validation:

The following are some of the tools for backend testing:

The following are some of the benefits of backend testing:

The following are some of the disadvantages of backend testing: