What is a Webhook and How to Use it?

This eliminates the need for constant checking to be done by the subject. Webhooks operate entirely over the internet and hence, all communication between systems must be in the form of HTTP messages.

Webhooks rely on the presence of static URLs which point to APIs in the subject’s system that must be notified when an event occurs on the observer system. An example of this would be a web-app designed to collect and manage all orders placed on a user’s Amazon account. In this scenario, Amazon acts as the observer and the Custom-Order-Managing Webapp acts as the subject.

Instead of having the custom webapp periodically call Amazon’s API’s to check for a created order, a Webhook created in the custom webapp would allow Amazon to push a newly created order into the webapp automatically through a registered URL. Therefore, to enable the use of webhooks, the subject must have designated URLs that accept event notifications from the observer. This reduces a significant load on the subject as HTTP calls are made between the two parties only on the occurrence of an event. 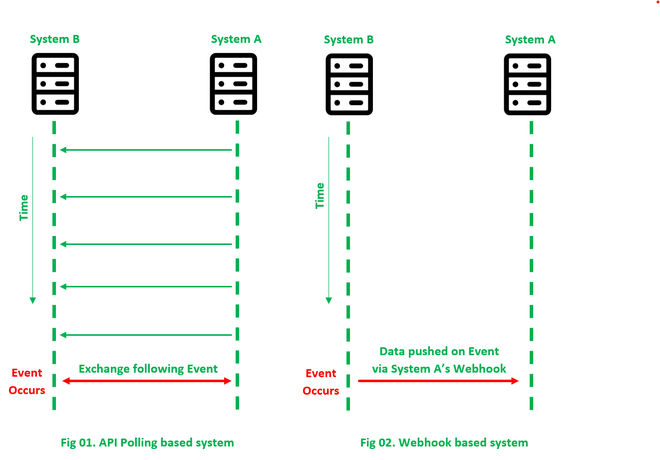 Once the webhook of the subject is called by the observer, the subject may take appropriate action with this newly pushed data. Generally, the Webhooks are executed through POST requests on a specific URL. The POST requests allow additional information to be pushed to the subject. Additionally, it can also be utilized to identify among a set of various possible events instead of creating separate Webhooks URLs for each event.

To implement incoming webhooks on your application, the following basic steps need to cover:

Both Webhooks and APIs have the goal of establishing communication between applications. However, there are some distinct advantages & disadvantages to using Webhooks over APIs for achieving application integration.

Webhooks tend to be better solutions if the following points are more relevant to the system being implemented:

API’s use should be preferred over Webhooks in certain other situations. The important aspects to be considered for the use of APIs over Webhooks are:

To address the possibility of losing data pushed by a server when the Webhook is offline, you can use an event messaging queue for storing such calls. Examples of platforms that provide such functionality include RabbitMQ, or Amazon’s Simple Queue Service (SQS). Both are designed to act as intermediate messaging storage facilities that avoid the possibility of losing a webhook call.

Many popular platforms provide the functionality of creating Webhooks that might be used in custom applications. The messaging platform Slack also provides such a system to allow messages to be pushed into a user’s Slack account when called.

To create a Slack webhook URL, we need to set up an Incoming Webhook Integration through the Slack console as follows:

Adding an incoming Webhook in Slack

To push a message into the Slack channel, a POST request must be executed on the Webhook URL with the message to be sent specified in the request body. On successful execution of the request, the message should be pushed into the user’s Slack account. 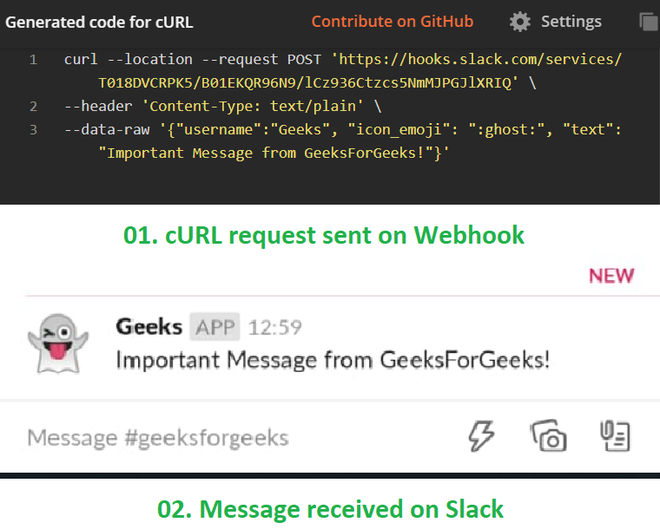 Pushing a message into Slack using a Webhook

These days, many popular platforms provide the functionality of creating Webhooks using integrations that might be used in custom applications like Github, Circle CI. The community platform Discord also provides such a system to allow messages to be pushed into a user’s Discord server.

To create a Discord webhook URL, we need to set up an Incoming Webhook Integration through the Discohook as follows:

We will use DiscoHook to push some notifications or urls released. 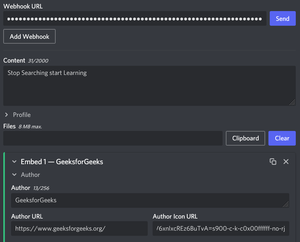 Discohook – Just give all the details of what we want our notification to be.

What we do is create a custom message for our users to get all the required information they need to have. Like, let’s take the case: The students are preparing for interviews for their placements, we can help them with the following :

The discord bot will notify :