What is a cryptocurrency?

We all must’ve heard the term Blockchain, Bitcoin, Cryptocurrency, etc somewhere and how such technologies are responsible for creating a significant impact in the digital world. These technologies are very well integrated with each other and hence work in synergy.

Now let us understand what it actually is by referring the following image.

So we can see that a Cryptocurrency like Bitcoin, Ethereum, etc are basically the product of a Protocol/ Program which uses a specific technology/platform. So when we refer to “Investing in Cryptocurrency” it means, investing in the protocol. The product which is the Cryptocurrency can be converted into a real-world currency for further use.

Note that Bitcoin does not really offer a platform. It’s not very friendly for developers trying to build new products on top of it. Ethereum, on the other hand, exists at all three layers. It is a protocol, providing base-level rules. It is a platform, enabling developers to build new products on the system. And, because its protocol also has a native asset, it also gets a built-in product (e.g.: BTC, ETH, etc).

Then why do Cryptocurrencies like Bitcoin, Ethereum, Neo are so valuable?
The answer to that is, for something to be an effective currency, it has to have a value. The US dollar used to represent actual gold. The gold was scarce and required more efforts to be mined and refined, so the scarcity and work gave the gold value. This, in turn, gave the US dollar value.

Cryptocurrency works similarly regarding value. In cryptocurrency, “coins” (which are publicly agreed records of ownership) are generated or produced by “miners.” These miners are people who run programs on ASIC (Application Specific Integrated Circuit) devices made specifically to solve proof-of-work puzzles. The work behind mining coins gives them value, while the scarcity of coins and demand for them causes their value to fluctuate. The idea of work that gives some value to cryptocurrency is called a “proof-of-work” system.

So, what forms a Cryptocurrency? Well, it is basically a program which is based on the Blockchain technology. There are 2 factors which make a Blockchain a cryptocurrency, namely transactions and consensus protocol. A block in a Blockchain has the following structure: 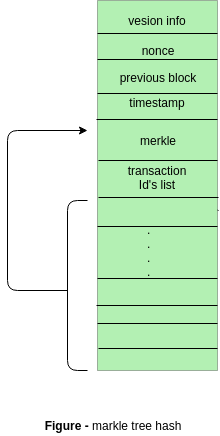 As we can see, a block contains multiple transactions at a time in the transaction’s id_list.

Future scope –
The future of most cryptocurrencies is uncertain, as it is still controversial and not authorize by many Governments, Institution etc. However, in the near future it may be used on a large scale & accept more. Because every development of new technologies includes the financial market to ease for the user to the bottom level. The ICO (Initial Offers of Cryptocurrency) is the fundamental part of an independent project that is still in the development phase. In this process, shares are not sold; the organization offers tokens, also known as the cryptocurrency.

Therefore, with time and the development of these projects, cryptocurrency can offer multiple benefits for these projects, and also for investors too. Cryptocurrency is the most independent currency of the financial world. Therefore, the fact of prohibiting its dissemination and/or use could cause a partial delay with respect to economic trends. Only future can show us how crypto influence in our lifestyle.

Complete Interview Preparation
View Details
System Design-Live Classes for Working Professionals
View Details
Data Structures & Algorithms- Self Paced Course
View Details
Most popular in GBlog
Most visited in Misc
We use cookies to ensure you have the best browsing experience on our website. By using our site, you acknowledge that you have read and understood our Cookie Policy & Privacy Policy