What divided by 5 equals 5? 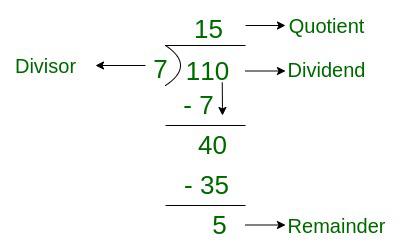 From the above Division it is clear that,

Divisor: The number which represents the denominator in the division operation is known as a divisor which is also referred to as a number of groups in which the dividend is split into, for example, if we divide 10 toffees among 2 children, then 2 is considered to be the division divisor of this operation.

Quotient: The answer that is obtained on the division of the numerator by the denominator is known as the quotient and it is basically the result that may or may not be of the same category of the integer or whole numbers to which the numerator or denominator belong. For example, if we split 10 toffees among 2 children then each child will get 5 toffees here 5 is the Quotient.

Dividend: Dividend is also known as the numerator which is a number that we split into the equal group, for example in the above problem division of 10 toffees among 2 children 10 is the dividend of this problem.

Step 2: The quotient of the division of the left-most digit of the dividend by the divisor is written on the top of the brackets line and is noted as 1the quotient’s first digit.

Step 4: Now the Dividend’s next digit is taken into consideration which is equivalent to 6 in this case

See the illustration below, which illustrates the division process in the above phases. 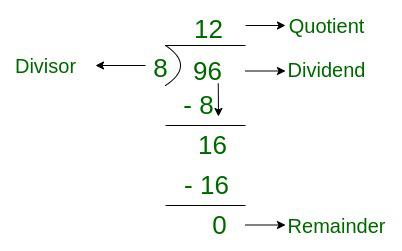 What divided by 5 equals 5?

Let us assume the number which on division by 5 gives us 5 to be x.

On solving for x, we get,

Taking 2 on the right-hand side,

Now, reciprocating the fraction, we get,

Therefore, upon division by each other, they yield the greatest common divisor = 1