What are the key features of Node.js ?

Node.js is a cross-platform runtime environment that allows you to create server-side and networking applications. Node.js apps are written in JavaScript and run on OS X, Microsoft Windows, and Linux utilizing the Node.js runtime.

Node.js also comes with a large library of JavaScript modules, making it much easier to construct web applications with it. It enhances the functionalities of Node.js. NodeJs facilitates the integration of programming languages with APIs, other languages, and a variety of third-party libraries. It is used exclusively in the ‘JavaScript everywhere’ paradigm for web app development and can handle both server-side scripting and client-side programming.

Web development is a constantly evolving process that demands ongoing innovation and updates to keep up with the desire for game-changing technologies as each year passes. Most developers favor JavaScript for front-end programming, which has recently been boosted by NodeJS for back-end development. NodeJS is being used in mobile application development in addition to online development.

Step 1: Run the following command in the terminal to verify if the node.js is installed. This command will show the installed version of NodeJs to our system.

Step 2:  Create package.json by using the following command to store the metadata of the project.

Step 3:  Now install express in the root directory using the following command in the terminal.

Step 4: Create app.js file in the root directory. Our folder structure is shown below:


Step 5: Run the above code and start the server using the following command.

Following are some of the functions that can be performed by Node.js – 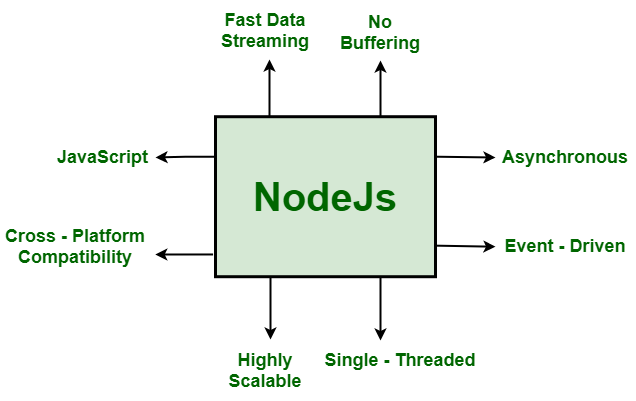 The following are some of the areas where Node.js is proving to be an effective technology partner-

My Personal Notes arrow_drop_up
Previous
Explain Bootstrap’s collapsing elements
Next
Difference between include() and include_once() in PHP
Recommended Articles
Page :
What are the various timing features of Node.js ?
19, May 20
How the single threaded non blocking IO model works in NodeJS ?
04, Feb 21
Nodejs | GM solarize() Function
14, Apr 20
Email Verification using OTP in NodeJS
19, Feb 21
NodeJS Program Lifecycle
18, Feb 21
NodeJS process.nextTick() Method
05, Mar 21
How to make to do list using Nodejs ?
31, Jan 22
How to kill all processes in NodeJS?
28, Mar 22
How to Deploy Contract From NodeJS using Web3?
27, May 22
Create Newsletter app using MailChimp and NodeJS
31, May 22
How to find all the values of particular key of MongoDB Database using Node.js ?
15, Dec 20
How to find record using any key-value pair information of record in your local/custom database using Node.js ?
17, Jul 20
Article Contributed By :