What are the C programming concepts used as Data Structures

Data-type in simple terms gives us information about the type of data.
Example, integer, character, etc.
Data-types in C language are declarations for the variables. Data-types are classified as:

Some of the examples of primitive data types are as follows 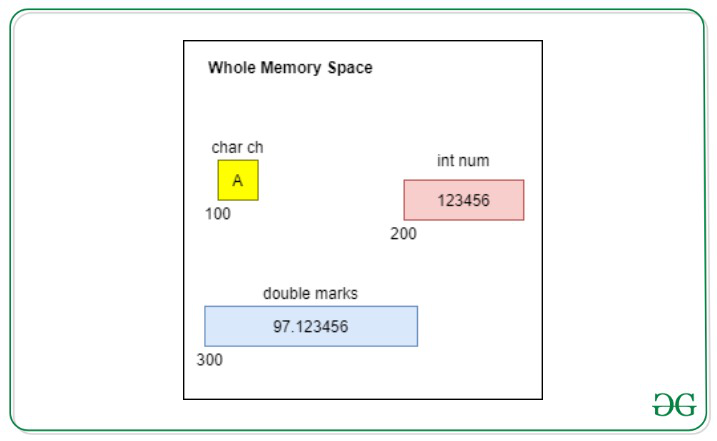 Variable named ch refers to the memory address 100, has occupied 1 byte of memory, which holds the value of char datatype ‘A’.

num is of integer type referring to the memory address 200, has occupied 4 bytes of memory, and holds value 123456.

An Array is a variable that can store multiple values of the same datatype. Array is a contiguous memory segment.

If you want to store 100 integers, you can use one array instead of using 100 different integer variables.

Syntax for declaration of array:

Example:
Declare an array that can hold values of 4 integers 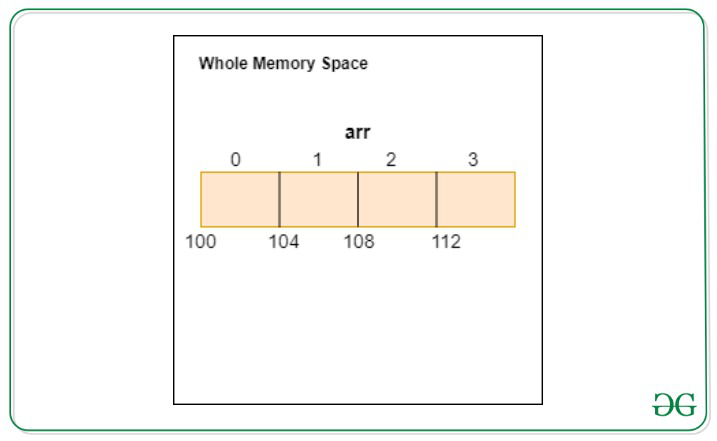 Array elements can be accessed using indices, which range from 0 to (array_size-1).

Below is the sample code for the usage of arrays in C:

We have used primitive data types to store data. But what if the data we want to store is more complex?

Let’s consider an example, we want to store information of the students in a class in a single variable. So, a student has :

Here, Roll number is of integer type and Name is string(array of characters) type.

Here, is the solution: structures 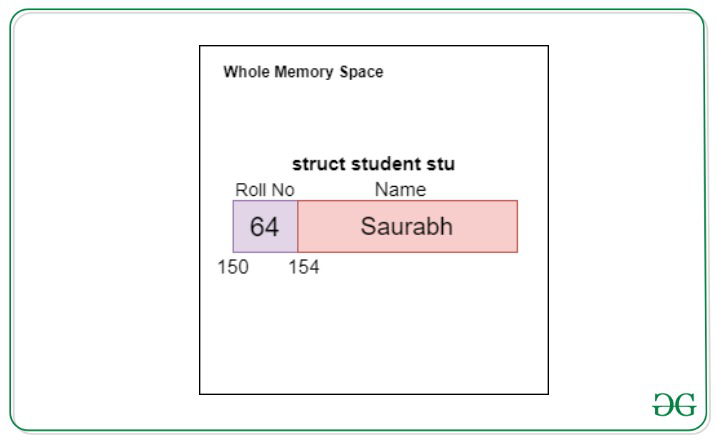 No memory is allocated when we define a structure.

Size of structure is equal to total amount of space consumed by each data member.

Below is the illustration of structures with the help of code:

This is because we assign the values scanned to the memory location of var.

We are not interested in addresses, but the values stored at that address.

Syntax for declaration of pointer:

Pointer may point to any datatype
It can hold address of any variable of the datatype it is pointing to.
An uninitialized pointer variable has NULL value. 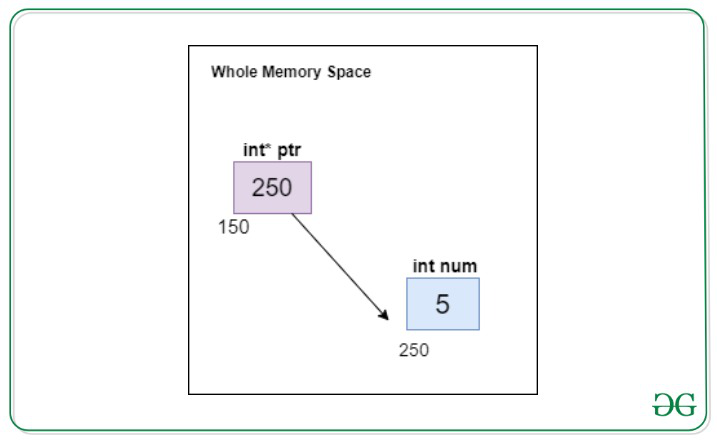 To get the value at the address, the pointer is pointing to, we use asterisk(*) operator.

So, in the above example, the ptr is holding address 250 and the value at address is 5.

Below is the illustration of the pointers with the help of code:

Size of Pointer variable is always constant in a system, irrespective of the datatype it is pointing to and it is usually 8 bytes. 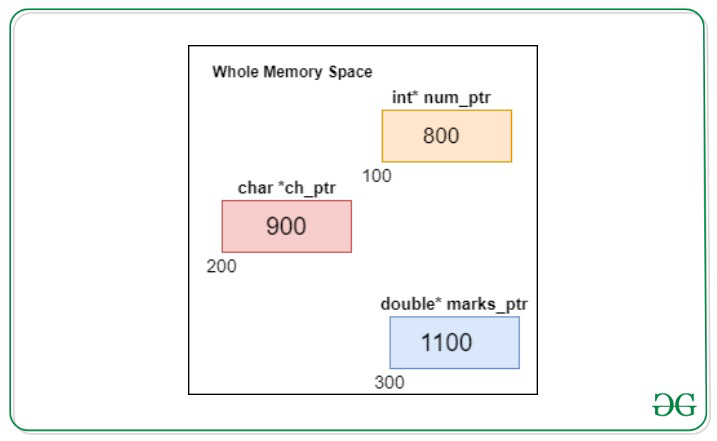 Pointer to the Structure

Here,  p is pointer and *p is the structure

Hence, to access the data members, we have to use

Below is the illustration of the pointers to the structure: 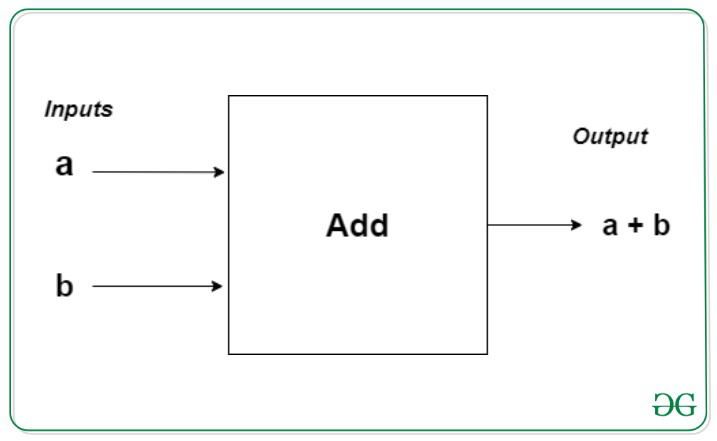 In the above example, we are giving inputs as 2 numbers to a function. It is performing function of addition. Then, it is return the sum of the two inputted numbers.

Functions can be classified into two categories:

To use the user-defined function, we have to perform two steps

Below is the illustration of the functions in C:

Note: The type passed in the function call should be compatible with the received by the function body as a parameter. Else, it will cause compilation error.

Function Classification based on type of call:

Below is the illustration of the function call by passing value in C:

In this program, we have passed variable a to the function, which was holding value 5. Then, we incremented the value of variable received by function i.e. x by 1. So, value of x now is 6. But, this change is limited to function scope only. The value of a in main will still be 5.

Below is the code of the function call by passing address:

As we are passing address of variable, we have to receive it as pointer variable.

Type casting is basically conversion of one datatype into another.

To learn more about typecasting, refer Type Conversion in C

As you know, an array is a collection of a fixed number of values. Once the size of an array is declared, you cannot change it.

Sometimes the size of an array you declare may be insufficient. To solve this issue, you can allocate memory dynamically at runtime. This is known as dynamic memory allocation.

Note: These functions are declared in header file stdlib.h. To use these functions, you must first include this header. 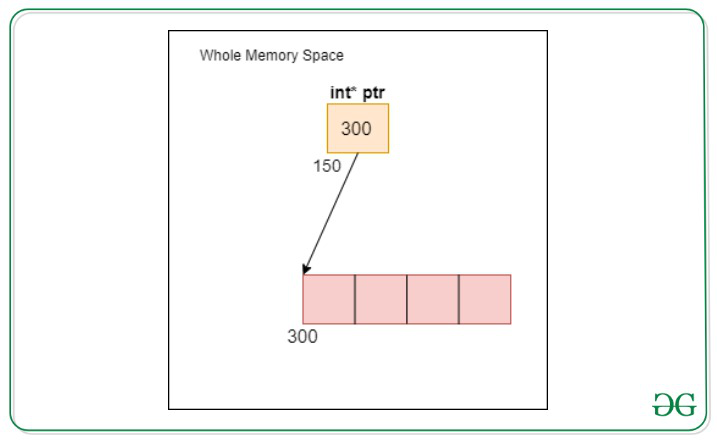 Below is the illustration of the Dynamic Memory Allocation in C:

Previous
Array of Structures vs. Array within a Structure in C/C++
Next
Length of longest subsequence in an Array having all elements as Nude Numbers
Related Articles
1. Difference Between C Structures and C++ Structures
2. Static and Dynamic data structures in Java with Examples
3. Real-time application of Data Structures
4. Top Data Structures That Every Programmer Must Know
5. Introduction to Data Structures
6. Common operations on various Data Structures
7. Why "&" is not used for strings in scanf() function?
8. Commonly used String functions in C/C++ with Examples
9. Check whether second string can be formed from characters of first string used any number of times
10. Check if it is possible to color N objects such that for ith object, exactly arr[i] distinct colors are used
Article Contributed By :