What are Polymorphic Viruses?

A computer virus is a program or malicious code that spreads between computers and performs destructive activities on the system. It spreads by attaching a copy of itself to a program file. The viruses simply replicate, display messages, and others might deliver a portion of the malicious code to a program that has the ability to corrupt programs, delete files, format the hard drive, and destroy valuable information.

‘Poly’ refers to many and ‘morphic’ refers to forms. Therefore as the name suggests polymorphic virus is a complicated computer virus that changes its form as it propagates to avoid detection by antivirus. It is a self-encrypting virus that pairs a mutation engine along with a self-propagating program code.

A Polymorphic Virus Consists of: 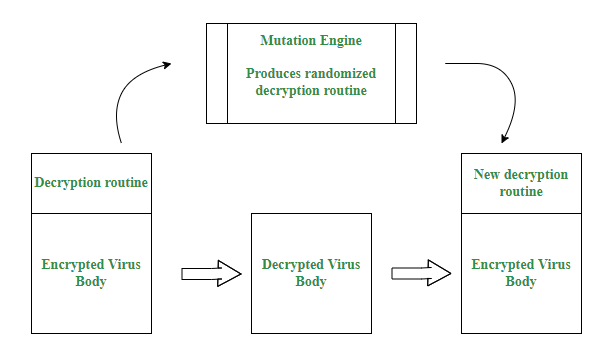 How Polymorphic Code is Generated?

Polymorphic viruses can easily fool the conventional antivirus software using signature-based detection. However, these viruses can be detected by new security technologies which use machine learning and behavior detection to identify any anomalous behavior in the system.

My Personal Notes arrow_drop_up
Previous
How to access and modify the values of a Tensor in PyTorch?
Next
Local Functions in Kotlin
Recommended Articles
Page :
Interesting Facts about Computer Viruses
23, Jul 20
Some Known Viruses & Worms
01, Mar 21
Types of Viruses
29, May 18
Firewall as a Service (FWaaS)
01, Aug 22
RESTful Web Services
01, Aug 22
Security as a Service (SECaaS)
31, Jul 22
How to Fix the SSL/TLS Handshake Failed Error?
26, Jul 22
What is Signaling Connection Control Part (SCCP)?
26, Jul 22
Type of EDI (Electronic Data Interchange)
25, Jul 22
How Does a Router Work?
24, Jul 22
Types of Internet Connection
22, Jul 22
What is 6LoWPAN?
18, Jul 22
Article Contributed By :