What are Cloud Firewalls?

A Firewall is a Security Product, whose main function is to filter out unauthorized and malicious traffic and they run between trusted and untrusted networks i.e private networks and the internet. These Firewalls block the malicious network and only allow the authorized traffic to bypass them, this is specified through a set of rules which is configured by the Administrators.

Cloud Firewalls act as a security product that acts as a shield and protects from unauthorized network traffic and this protection is provided to different cloud components like Cloud CRM, Cloud Database, Email Cloud.

Need of Cloud Firewall :
Cloud Firewall is very essential in providing security against malicious and unwanted network traffic. Cloud is a source of virtual space which stores a lot of crucial data that belongs to enterprises and there is a great need for Security Mechanism to protect it and as firewalls have been successful in on-premise physical infrastructure.
Cloud Providers configured robust Firewall Environments for the virtual workspaces as well.

These Cloud Firewalls are designed in such a way that they can block the cyberattacks directed against the virtual cloud workspaces and provide 24/7 security to the cloud components, we can assume these are the same as the security guards that guard banks and these Virtual Workspaces i.e. Cloud servers can be considered as Bank assets.

These are explained as following below.

1. Next-Generation Firewalls (NGFW)  –
These are Cloud Firewall Service that is intended to be deployed in a data center with aim of protecting the Organization’s servers Infrastructure-As-a-Service or Platform-as-a-Service Model. In these models, the cloud firewall software is deployed and guards Network Traffic in cloud operations.

2. SaaS Firewalls –
These kinds of Firewalls are configured in such a way that their main job is to secure the network of the virtual space same as traditional firewalls but the only difference being hosted in the cloud. These have various other names and types like :

Working Of Cloud Firewall :
The working of a cloud firewall is similar to that of a traditional firewall the only difference is the cloud firewall is being hosted in a cloud environment. These Cloud Firewalls function like, packet-scanning firewalls in which they filter out incoming data before its entering the network which involves assessing active connections of the cloud network, based on these connections, the firewall will decide which packets are safe and can be passed through it, hence a typical cloud firewall performs following functions:

Packet Filtering :
The small amounts of data in a network are called packets. These packets are exposed to a certain group of filters before they bypass the Firewall in which the packets are scanned against some threats, if they match these threats then the Firewall blocks them from entering the Network.

Stateful Inspection :
Cloud Firewalls also perform the stateful inspection of incoming packets of data where these firewalls check for some policies between source and destination in order to establish a session between them, if the required policies are not between source and destination then the access will not be provided and the users need to register new policies for them. 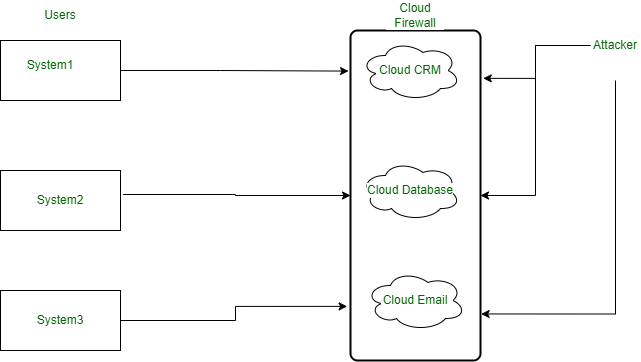