What are breakpoints in Node.js ?

In this article, we will learn about the various breakpoints that occur in the Node.js web framework.

The breakpoints in Node.js are basically the bugs and errors that exist in the program code. The breakpoints tend to show an error while the program is being executed by the compiler. The breakpoints in Node.js can also be called syntax errors that might occur in the code while execution in the compiler. Also, there is various types of other errors like Time limit exceeded or Space limit exceeded errors due to which the processor might crash due to an undefined value that occurs in the loop.

Using breakpoints, you can make your program run normally up until you reach the critical portion of code where you suspect the error is present. Then, you can switch step by step.

The breakpoints in Node.js are defined in the program during an error in execution based on the debugger and the code editor. The biggest advantage of using the Node.js web framework is that it gives us the priority to enforce nay debugger application of any programming language like JavaScript on the Node.js as both of them are interrelated. It breaks our program code into small blocks of program data during the execution of the program and then the process is stopped once the program in Node.js gets completely executed. To deal with the various breakpoints that occur in the Node.js web framework, we need to perform the debugging operation on our code to optimize it further.

Debugging Node.js: All the popular IDEs (Integrated Development Environment) have in-built support for debugging and removing errors from the Node.js web framework that are compatible with it. For Example – Microsoft Visual Studio Code and Jetbrains WebStorm etc. Many other programming languages with similar development frameworks like JavaScript and Java can be easily debugged and the errors and breakpoints can be removed from them easily by traversing through the code looking for errors, trying to restart the compiler to avoid any issue, or by changing the variables, etc. but in the Node.js it is not possible like that.

How To Debug Node.js

The most basic and simple method for starting to debug the code in Node.js is to use the in-built library of JavaScript functions in your IDE. Now to understand the steps for how to debug Node.js, we have to use the following steps:

Step 1: To start the debugging process of the Node.js framework, we have to use any popular IDEs (Integrated Development Environment) like Visual Studio Code or the Jetbrains WebStorm based on the JavaScript programming language to remove the bugs and errors in the code.

Step 2: Now enter the following command in the terminal window of the IDE to start the initialization and the installation process of the Node.js debugging process in the compiler as it comes as a pre-installed library in it.

Step 3: Now set the SSH location of the virtual machine through which you want to configure the debugging program of the Node.js web framework on your device. For starting the debugging process, enter the following command on your terminal after the previous command as stated. Take any user ID for running the virtual machine, for your instance, we have taken user123@contribute.geeksforgeeks.com.

Step 4: The above code initiates the SSH process through the terminal to debug the Node.js code through the given virtual machine instance. The important thing to note in this step is that it achieves a “hit count condition” while debugging the Node.js web framework while debugging which leads to the breakpoint to hit the final condition of execution before it breaks. We can also perform the same operations using the same steps on any Chromium project-based browser like Google Chrome for JavaScript-based Node.js debugging. 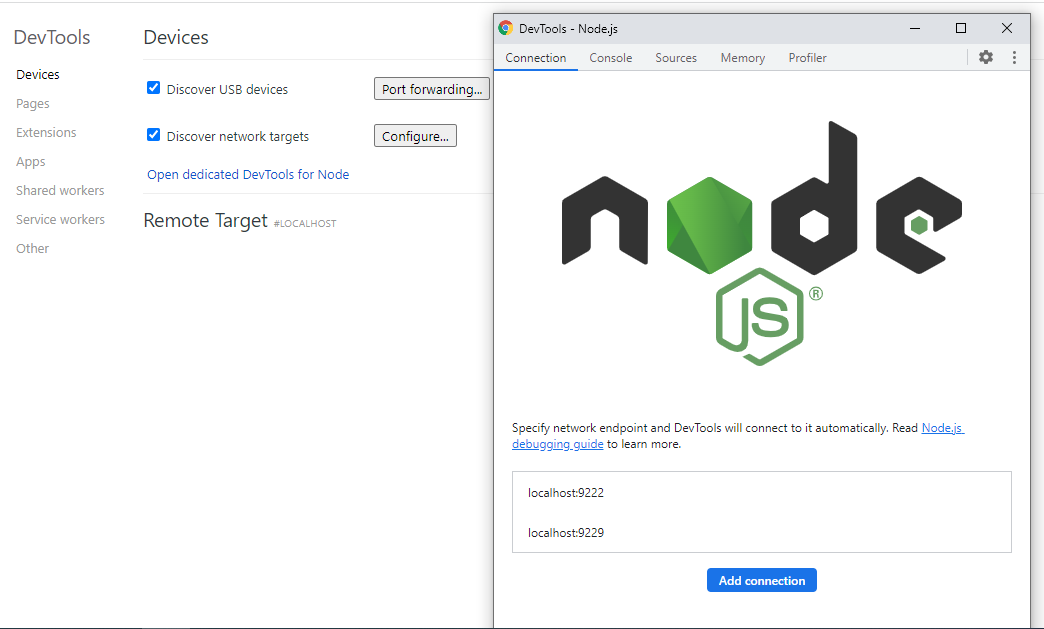 Step 5: The breakpoints in JavaScript don’t require any further debugging after this step of validation and execution by the system.

Methods to Debug Node.js: In the Node.js framework, we have to use certain methods in order to remove the error from the code. They are as follows:-

Next
Difference between alert box and confirmation box in JavaScript
Related Articles
1. How the single threaded non blocking IO model works in NodeJS ?
2. Nodejs | GM solarize() Function
3. Email Verification using OTP in NodeJS
4. NodeJS Program Lifecycle
5. How to kill all processes in NodeJS?
6. How to Deploy Contract From NodeJS using Web3?
7. Create Newsletter app using MailChimp and NodeJS
8. How to make to do list using Nodejs ?
9. NodeJS process.nextTick() Method
10. How can you cast a simple spell in Node.js ?
Article Contributed By :