What are Amino Acids?

Amino Acids are essential for the human body. Amino acids are important in the formation of the structure of proteins. When a person eats foods that contain protein, the digestive system breaks down the protein into amino acids. The body then combines amino acids in various ways to perform physical functions. The body needs 20 amino acids to maintain good health and normal functioning. A healthy body can make only 11 amino acids on its own, but the other 9 amino acids cannot be synthesized by the body. The other 9 amino acids must be ingested from the other sources through food. A body that can make amino acids are called non-essential amino acids because it creates on its own. The amino acids which cannot make owned by the body are called essential amino acids because they are taken from other sources. Amino acids are an essential part of the functioning of various chemical and biological of our body. The different functions include transportation of molecules, building, and fixing of the tissues, development, and capability of enzymes, food digestion, and so on. These biomolecules are important elements for the development and advancement of individuals. There are around 300 amino acids that can be tracked down in nature. Be that as it may, just 20 amino acids are significant.

Amino acids are organic compounds containing amine (- NH2), carboxyl (-COOH), and side chain—R group. The major elements of amino acids are carbon, hydrogen, nitrogen, and oxygen. Each molecule contains a central carbon atom, α-carbon to which both an amino and a carboxyl group are attached. The other two bonds of the α-carbon atom are bonded by a hydrogen (H) atom and the R group. All amino acids have the alpha carbon bonded to a hydrogen atom, carboxyl group, and amino group. The R group (side chain) varies among amino acids.  The structure of amino acids is represented below. 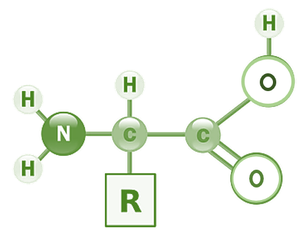 The different types of amino acids are classified based on 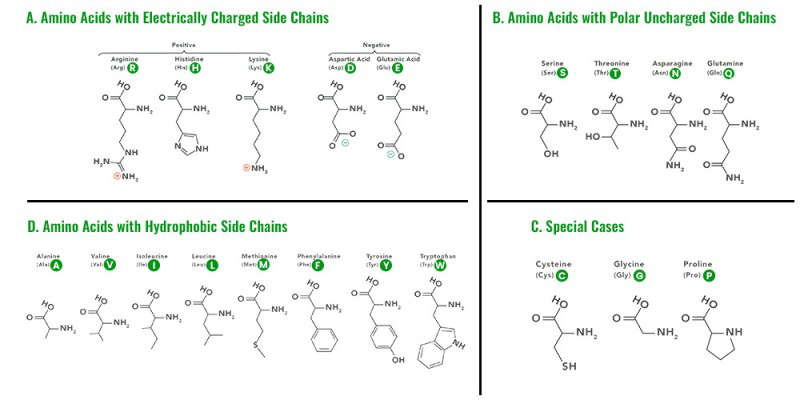 Based on nutritional requirements

An amino acid that can be made by the own body itself. A healthy body can create on its own. Non-essential amino acids are mainly synthesized from glucose and other biological sources within your cells. Diet plays an important role if it does not provide enough of them, the body cannot synthesis essential amino acids. Because of that, you must include them in the foods you eat. The nonessential amino acids include Alanine, asparagine, aspartic acid, cysteine, glutamic acid, glutamine, glycine, proline, serine, and tyrosine.

The carboxyl group of amino acids can release hydrogen (H+) ions with the formation of Carboxylate (COO–) ions.

When amino acids are reacted with an alcohol, they form an ester. The esters are volatile, in contrast to the form of amino acids.

Amino acids are the structure blocks of proteins, and proteins assume a key part in practically all life processes. In this way, it is important to remember every one of the nine essential amino acids for our day-to-day diet to keep a solid and legitimate capability of our body. The lack of amino acids might incorporate different neurotic problems, including Enema, Anemia, Insomnia, Diarrhea, Depression, Hypoglycemia, Loss of Appetite, Fat stored in the liver, Skin and hair-related issues, Headache, shortcoming, peevishness, and weariness.

Foods that incorporate high amounts of amino acids include

Question 1: What is the importance of amino acids?

The main importance of amino acids is:

Question 2:  What are non-protein amino acids?

The α-amino acids are found in cells that are not integrated into proteins. Examples include ornithine and citrulline. Both of these mixtures are intermediates in the urea cycle. Ornithine is a metabolic forerunner of arginine and citrulline can be delivered by the breakdown of arginine. The last response produces nitric oxide, a significant molecule. Citrulline is the metabolic product. It is now and then utilized as a dietary enhancement to decrease muscle weariness.

Question 3: What are acidic and basic amino acids?

Question 4: What are polypeptides?

Amino acids are connected to one another by peptide bonds. The carboxyl group of one amino acid is joined to the amino group of the following, with the departure of a hydrogen molecule. Extra amino acids are included in the same way, by the development of peptide connections between the free carboxyl on the finish of the developing chain and the amino group of the following amino acid in the sequence. A chain comprised of only a couple of amino acids connected together is called an oligopeptide, while a normal protein, which is comprised of numerous amino acids is known as a polypeptide.

Question 5: What are the diseases caused due to deficiency of amino acids?

The diseases caused due to deficiency of amino acids in the body are:

Question 6: What is the isoelectric point of amino acids?

In amino acids with uncharged side-chains, the zwitterion prevails at pH values between the two pKa values. However, coincides in balance with limited quantities of net negative and net positive particles. At the midpoint between the two pKa values, the following measure of net negative and hint of net positive particles balance, so that the typical net charge of all structures present is zero. This pH is known as the isoelectric point.

Question 7: What are Standard and Non-Standard amino acids?