One of the most essential natural resources that are present on this planet is water. Water plays a major role on the earth. Water covers more than 70% of the earth’s surface. It is essential in human, aquatic, and animal life. Water covers the everyday essentials of humans. About 60 to 70% of the human body covers with water. The water cycle is a process that continues naturally in the nature of the earth. Today’s water pollution is the most devastating condition that concerns the world. The disturbing aquatic life is the first effect of water pollution. Contaminated water leads to many disease-causing elements such as bacteria and viruses and also other harmful diseases. All the toxic wastes that are dumped in the water bodies cause a great threat to life, slowly killing animals and plants life. It also supports the growth of harmful organisms which destroys biodiversity. Certain algae growth decreases the quality of oxygen in the water, killing anything living in it. 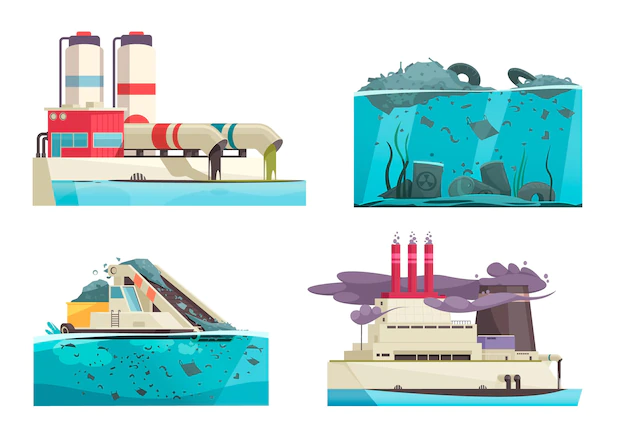 Water pollution is defined as the contamination of water bodies by pollutants. This causes the water unfit for drinking, cooking, washing, bathing, and other activities. Pollutants include chemicals, bacteria, plastic, parasites, etc. All types of pollution gradually take their route to water causing water pollution. 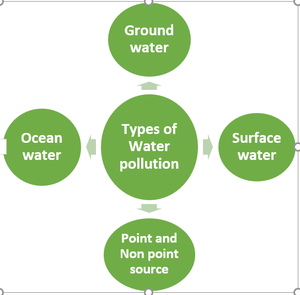 During rainfalls some of the water enters the earth, filling the breaks, cleft, and permeable spaces of a surface, it becomes groundwater. The vast majority of them depend on groundwater, siphoned to the world’s surface, for drinking water. For certain people in provincial regions, it’s their main freshwater source. Groundwater gets contaminated when pollutants from pesticides and composts to squander filtered from landfills and septic frameworks, delivering it perilous for human use. Freeing groundwater of pollutants can be challenging to unimaginable, as well as exorbitant. When contaminated, spring might be unusable for a really long time, or even millennia. Groundwater can likewise spread defilement a long way from the first dirtying source as it saturates streams, lakes, and seas.

Covering around 70% of the earth, surface water fills our seas, lakes, streams, lakes, and so on. As per the latest reviews on public water quality from the U.S. Natural Protection Agency, almost 50% of our waterways and streams and more than 33% of our lakes are contaminated and unsuitable for swimming, fishing, and drinking. Supplement contamination, which incorporates nitrates and phosphates, is the main sort of tainting in these freshwater sources. Civil and modern waste releases contribute their reasonable portion of poisons too.

A lot of sea contamination begins ashore, whether along the coast or far inland. Pollutants like synthetic substances, supplements, and weighty metals are conveyed from ranches, processing plants, and urban communities by streams and waterways into our narrows and estuaries from that point they head out to the ocean. In the meantime, marine material particles and floating substances especially plastic quickly passed up the breeze or washed in through storm channels and sewers. Our oceans are additionally some of the times ruined by oil spills of large and fewer leaks and are reliably absorbing carbon contamination from the air. The sea ingests as much as a fourth of man-made fossil fuel by-products.

The point when contamination comes from a solitary source is called a point source. Models incorporate wastewater released lawfully or unlawfully by a producer, petroleum processing plant, or wastewater treatment office, as well as pollution from releasing septic frameworks, synthetic and oil slicks, and unlawful unloading. Nonpoint source contamination will be pollution gotten from diffuse sources. These may incorporate horticultural or running of rainwater or trash blown into streams from land.

Human activities and their wastage account for the major cause of water pollution. Water contamination and loss of water due to overuse of growing population. Some of the major pollutant sources of contamination are as follows: 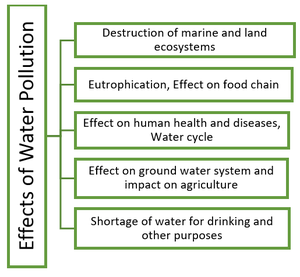 Water pollution should be resolved as soon as possible because of the rise in the human population and their concern. Water pollution can be controlled in many ways and methods by taking proper actions and introducing new technologies.

Water treatment plants should be established on near water projects to treat water before directing it to commercial and household purposes. It is better to dump waste cautiously and not to dump it straightforwardly into water bodies, without appropriate waste treatment. industrial companies ought to treat their wastage cautiously prior to discarding chemical substances and different materials into water bodies straightforwardly. Treatment of sewage water and the modern effluents prior to delivering it into water bodies. High temp water ought to be cooled before discharge from the power plants.

Substances that are taken out during the most common way of drinking water treatment incorporate suspended solids, microscopic organisms, green growth, viruses, parasites, and minerals like iron and manganese. The cycles engaged with eliminating the pollutants incorporate actual cycles, for example, settling and filtration, compound cycles, for example, sanitization and coagulation, and natural cycles like slow sand filtration. Chlorine is utilized on the grounds that it is an extremely successful disinfectant. Lime is added to the filtered water to change the pH and settle the normally delicate water. Bleaching powder and alum are utilized for the evacuation of arsenic.

Avoiding the usage of chemical fertilizers

Clean and fresh water might appear to be copious, yet there is a restricted sum accessible to the environment. Use water by installing water-saving gadgets on sinks, in latrines, and in showers. Take baths rather than long showers. Try not to run the water continually while cleaning your teeth. Wash garments when you have a full heap of clothing. Possibly water your grass and plants when totally important.

Try not to dump chemical compounds

Use less chemical-containing substances and cleaners around the home. Not exclusively will you cut down on indoor air contamination, yet additionally on entering chemicals into the water system. Try to utilize biodegradable cleaners. Try not to empty oil or different chemicals into the drainages in the city.

Many homes have lead lines or lead-around associations on the lines which convey water to their homes. Since this lead might enter your drinking water and create clinical issues in children. Important to have water tests. On the off chance that lead is available, introducing a filter might tackle the issue.

Do not pollute open-air water sources

Try not to dirty open-air water sources: Do not empty oil or different synthetic substances into the drainages in the city. A little oil can kill many plants and creatures. Try not to litter, particularly close to water. Litter might be eaten as food by creatures and hurt them. Try not to utilize pesticides on yards, or utilize just natural ones. Utilize less manure, too. Every one of these can enter our water sources.

Water toxins might cause infection or go about as poison. Microbes and parasites in ineffectively treated sewage might enter drinking water supplies and lead to stomach-related issues like cholera and lose of bowels. Dangerous synthetic compounds, pesticides, and herbicides from industries, ranches, homes, and fairways can cause intense harmfulness and quick passing, or constant poisonousness that can prompt neurological issues or malignant growths. Many water poisons enter our bodies when we use water for drinking and food readiness. The poisons enter the gastrointestinal system and arrive at different organs in the body and cause different diseases. Synthetic compounds that interact with the skin from washing garments, or from swimming in contaminated water might prompt skin itchiness. Dangerous synthetics in water systems can likewise influence the environmental elements of creatures and plants that live there. In some cases, dangerous microbes will leave within the synthetics in the water system.  when it is used for drinking purposes people become sick which leads to harmful side effects.

Question1: What are sewage waste treatment and its steps involved?

Sewage waste treatment for the most part alludes to the method involved with cleaning or eliminating all contaminations, treating wastewater, and making it protected and reasonable for drinking prior to delivering it into the climate. There are four principal steps of the wastewater treatment process, specifically:

Question 2: What are the government acts to stop water pollution?

Question 3: What are the key causatives of water pollution?

The key causes of water pollution in India are:

Question 4: What basis on water bodies designated by the CPCB?

Question 5: What is Ganges pollution?

In India, the River Ganges is the 6th most dirtied waterway on the planet. This is obvious as many enterprises close by discharge their effluents into the waterway. Besides, strict exercises, for example, body burials and incinerations close to the shore add to contamination. The Ganges River shark and dolphin are critically endangered species. By around 1.2 billion individuals overall don’t have perfect consumable water and appropriate sanitation. It is additionally projected that almost 1000 children will be died consistently in India because of water-related issues.

Question 6: What are the effects of water pollution?

Question 7: What is Minamata Incident?

The Minamata Incident checked one of the most pessimistic scenarios of water contamination. In 1932, a factory in Minamata City, Japan started unloading its industrial effluent Methylmercury, into the sea. The infections and deaths went on for just about 36 years before they could be authoritatively recognized by the government authority and the association. At first, dogs and cats were impacted by this. Before long, similar side effects were seen in individuals, however, the reason was not clear at that point. Other impacted individuals showed side effects of intense mercury harming, for example, ataxia, muscle shortcoming, loss of muscle coordination, harm to discourse and hearing, and so on. In serious cases, loss of motion happened, which was trailed by extreme lethargies and demise.