Natural resources are resources that exist without human intervention and are found in the environment and developed without human involvement. They include air, sunlight, water, soil, stone, plants, animals, fossil fuels and many more. Natural resources are naturally occurring items or supplies extracted from the earth that are beneficial to man or could be helpful under possible technological, economic, or social circumstances, such as food, building and clothing materials, fertilizers, metals, water, and geothermal power.

Water resources are natural water resources that have the potential to be used as a source of water supply. Only 3% of the water on Earth is freshwater, with little more than two-thirds frozen in glaciers and polar ice caps. The unfrozen freshwater that remains is usually found as groundwater, with only a trace above ground or in the air.

The water cycle is a continuous water circulation in the Earth-atmosphere system. Evaporation, transpiration, condensation, precipitation, and runoff are the most significant processes in the water cycle. The state of water changes from one phase to the next during this process, while the total number of water particles remains constant. Water goes through a variety of processes, including evaporation, melting, and freezing, as well as sublimation, condensation, and deposition. 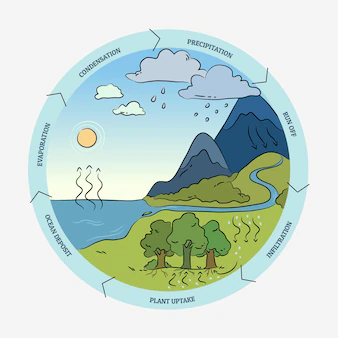 The sun is both the most powerful source of energy on the planet and the primary cause of evaporation. When water molecules on the surface of water bodies become excited, they rise into the air and evaporate. Water evaporates when it is below its boiling point. The process of evaporation via the leaves of plants is known as evapotranspiration. As a result of this process, a large amount of water is released into the atmosphere.

Because of the low temperatures at high altitudes, the water vapour that has accumulated in the atmosphere cools. These vapours condense into droplets of water and ice, which eventually condense into clouds. The temperature at which condensation occurs is known as the dew point. Temperatures can naturally approach or go below the dew point, especially at night. As a result, water droplets are sprayed on lawns, cars, and buildings every morning. Water droplets can form on the outside of a cold soda glass due to condensation. Warm air reaches its dew point and condenses when it comes into contact with a cold surface. Water droplets form on the glass or container because of condensation.

When the temperature rises above 0 degrees Celsius, the vapours condense into water droplets. In the absence of dust or other contaminants, however, it cannot condense. Water vapours stick to the particle’s surface as a result. When enough droplets form, it falls from the sky and onto the earth below, a process known as precipitation. Water droplets freeze and fall as snow or hail in extremely cold weather or when air pressure is extremely low.

Infiltration is the process through which rainwater is absorbed into the ground. The amount of water absorbed varies depending on the medium into which it was introduced. Rocks, for example, will hold substantially less water than soil. Groundwater can be transported by both streams and rivers. It’s possible, however, that it’ll simply sink deeper and form aquifers.

If rainwater does not create aquifers, gravity transports it down mountain and hill slopes, finally forming rivers. Runoff is the term for this practice. Icecaps arise when precipitation surpasses the rate of evaporation or sublimation in colder climates. The world’s largest icecaps are found at the poles.

Impact of Rainfall on the Environment

Water evaporates from the land and sea, eventually returning as rain and snow to the Earth. Climate warming hastens this cycle by causing more water to evaporate into the atmosphere as air temperatures rise. Warmer air can carry more water vapour, causing more violent rainstorms and major challenges like excessive flooding in coastal cities all over the world.

While some locations are seeing more severe storms, others are suffering dry air and even drought. As previously said, as the temperature rises, evaporation rises and soils dry out. When rain does fall, much of it washes off the hard ground into rivers and streams, leaving the land dry. More evaporation from the soil means a higher risk of drought.

Hydrological extremes are becoming more extreme as a result of climate change. As a result, hotspots and vulnerable areas form, necessitating challenging adaptation. Climate change’s negative effects on freshwater systems are quite likely to outweigh their benefits globally.

Any natural substance or material that humans can employ to their advantage. Land, water, and air are the Earth’s resources.

Question 2: What is the role of the atmosphere in our lives?

The vapours condense into water droplets when the temperature rises above 0 degrees Celsius. In the absence of dust or other pollutants, however, it cannot condense. As a result, water vapours cling to the surface of the particle. Rain falls from the sky to the land below when enough raindrops combine. Precipitation is the term for this.

Question 4: When does evaporation take place?

Evaporation often occurs below the boiling point of water.

Question 5: What is the water cycle?

Water cycles continually in the Earth-atmosphere system throughout the water cycle, also known as the hydrologic cycle.

Question 6: How do plants give off the water in the atmosphere?

Through the process of transpiration (i.e. exhalation of water through stomata) in their leaves.