Vue.js is a progressive javascript framework for developing web user interfaces. It is a performant, approachable, and versatile framework. We can create Single Page Applications as well as Full Stack applications. It is built on top of HTML, CSS, and Javascript which makes it easier for developers to integrate Vue.js in any application at any stage.

Components are used to build the combination of UI elements that need to be called any number of times. In simple terms, you call a function many times when you need to perform the same action on some different sets of input. This is a similar approach to calling the same UI element on different web pages. The UI element called is the Component and the process is Reusing of Components, Some data might be component-specific. Those data need to be bound with a component on a repeated basis. This is when passing data through props to a component comes in handy.

Step 1: To create a Vue app you need to install Vue modules using this npm command. You need to make sure you have the node installed previously.

Step 2: Use Vue JS through CLI. Open your terminal or command prompt and run the below command.

Step 3: Run the below command to create the project.

Step 4:  After creating your Vue project move into the folder to perform different operations.

Step to run the application: Open the terminal and type the following command.

Open your browser. Open a tab with localhost running (http://localhost:8080/) and see the output shown in the image.

Project Structure: After running the commands (mentioned in the above steps), if you open the project in an editor, you can see a similar project structure (as shown below). 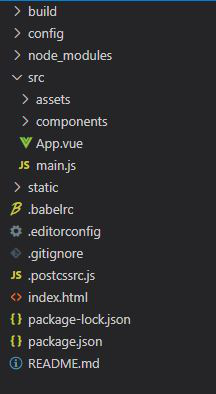 App.vue: This file is calling the task component 3 times to display the whole UI.

Example 2: In this example, we are creating a to-do list by using the Reusing Components in VueJS.

App.vue: This file is calling the task component 5 times to display the user’s to-do list. 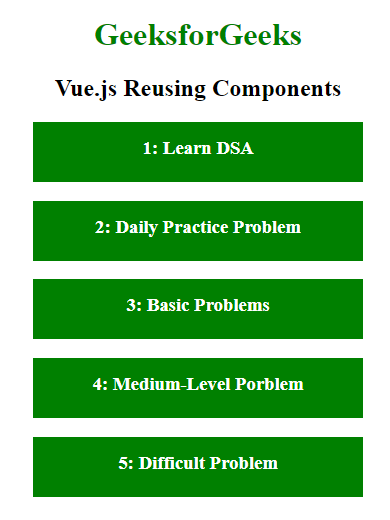 Previous
Blaze UI Typography Blockquote
Next
Primer CSS Responsive Grids
Related Articles
1. Adding Filters in VueJS
2. How to loop through a list of elements and display it in VueJS ?
3. Capitalizing a string using filters in VueJS
4. How to check given string is Palindrome or not using filter in VueJS ?
5. How to convert a normal string to a uppercase string using filter in VueJS ?
6. Building a Shopping List with VueJS
7. How to check an image is loaded or not in VueJS ?
8. What is the difference between created and mounted event in VueJS?
9. Difference between VueJS and AngularJS
10. Differences between Functional Components and Class Components in React
Article Contributed By :