Prerequisite – Virtual LAN (VLAN), Access-lists (ACL)
VLAN (Virtual LAN) is a concept in which we divide the broadcast domain into smaller broadcast domains logically at layer 2. If we create different VLANs then by default, a host from one VLAN can communicate with all the hosts residing in the same VLAN. If we want some hosts not able to reach other hosts within the same VLAN, then the concept of VLAN Access-list or Private VLAN can be used. (Access-list, is a set of various permit or deny conditions, used for packet filtering)

VLAN ACL (VACL) –
VLAN ACL is used to filter traffic of a VLAN (traffic within a VLAN i.e traffic for destination host residing in the same VLAN). All packets entering the VLAN are checked against the VACL. Unlike Router ACL, VACL is not defined in a direction but it is possible to filter traffic based on the direction of the traffic by combining VACLs and Private VLAN features. 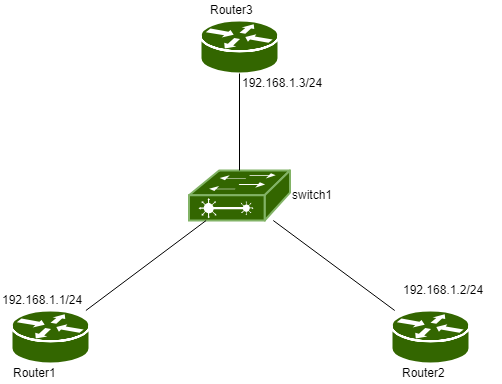 In this task, we will deny traffic from Router1 to Router3 using VACL.

Now, configuring VLAN access-map which states that match the IP address defined in access-list and take action of drop (which means traffic should not be allowed from 192.168.1.1 to 192.168.1.3).

The traffic from Router2 to Router3 will also get drop because no action is defined for this traffic (implicit deny). Therefore, we have to define another rule stating that the other traffic should be allowed.

At last, we will assign this access-map, named My_access_list, to a VLAN (here VLAN 1)

To verify the configuration, use the command.

This will display the VLANs which are filtered by the VLAN access map.