What are Vestigial Organs?

Vestigial Organs are such parts of the body or cell of the body that stops working due to the process of Evolution, but they still exist in the modern creature. This means some organs in the human body are no longer needed by the modern human species. But still, they are present the in the body. These organs were helpful for their ancestral species. But they are not usable for the new species. Not only humans, but many species possess Vestigial Organs.

Evolution is a continuous process. Evolution is only controlled by the Natural Selection process. Nature controls which organism needs to be developed in a certain creature. Also, besides that, there should be strong willpower of the creature to survive in nature. The combination of both these two can create a new species. In this way, Evolution works.

But sometimes, due to some exceptions, we see the opposite of the above process. In such cases, some organs stop developing themselves. As there is no further need to develop. Due to the Natural Selection process, a creature tends to develop a new trait. That trait is suppressing the existing mechanism in the creature. The existing mechanism in the creature may be old enough to survive in nature.

In such cases, creatures develop new traits in themselves. And they started neglecting the existing mechanism or organ. In this way, those organs become inactive over time. After millions of years, those organs become Vestigial Organs. As degradation of any organ also takes a long time.

Though there is not any usage of Vestigial Organ in any species. Many years ago, creatures stop using those organs in their daily life. But still, they have importance. The importance is from the view of the Evolution process. By viewing the Vestigial Organs, scientists believe that there is Evolutionary similarity among many species. Along with the Homologous Structure & Analogous Structure, Vestigial Organs play an important role to find out the missing links among species. 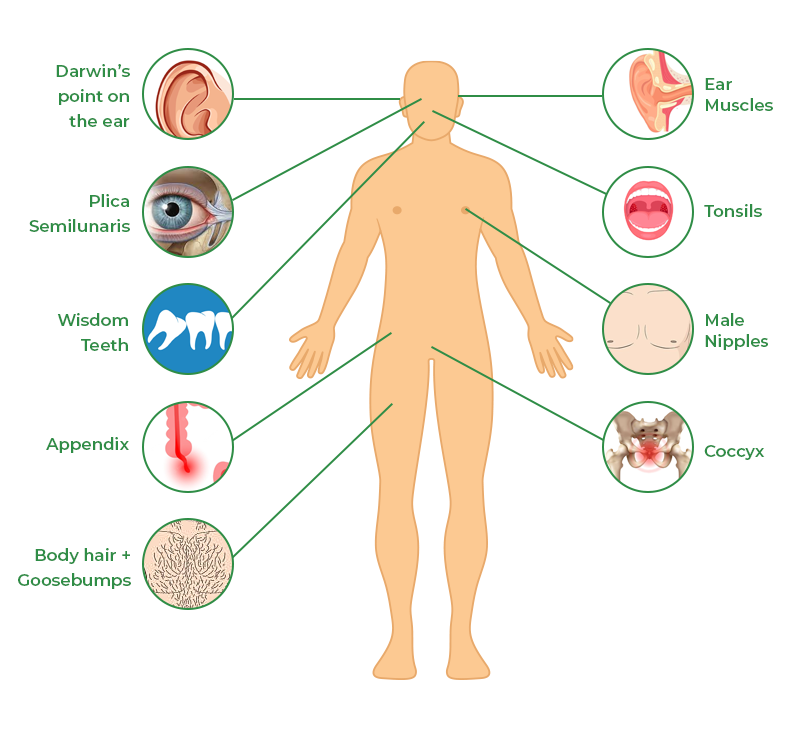 Example of Vestigial Organs In Humans

Vestigial Organs In Other Animals

Question 1: Are nails the Vestigial Organs in the human body?

Question 2: Are body hair a Vestigial organ in the human body?

No, body hair is not a Vestigial Organ in humans. Though, they do have not fixed tasks to perform in our life. Not having any task to perform doesn’t mean that the organ is a Vestigial Organ. Still, the Body Hair responded with reflexes & emotions. So they still respond with stimulus.

Question 3: Why we don’t need the third eye membrane to moisturize our eyes?