Growth is necessary for life. Growth in plants or in any other organisms includes an increase in size which is irreversible. In other words,  growth is a natural and essential process that can permanently change the height, weight, and volume of plants and their parts.  Sexual reproduction in the plant takes place in a modified shoot called a flower. The beginning of the flower takes place when the vegetable apex developed into the reproductive structure. Hence, it indicates a transformation of the vegetative apex into the reproductive phase. Reproduction in a plant takes place at a particular time in the year and is controlled by morphological and environmental conditions: 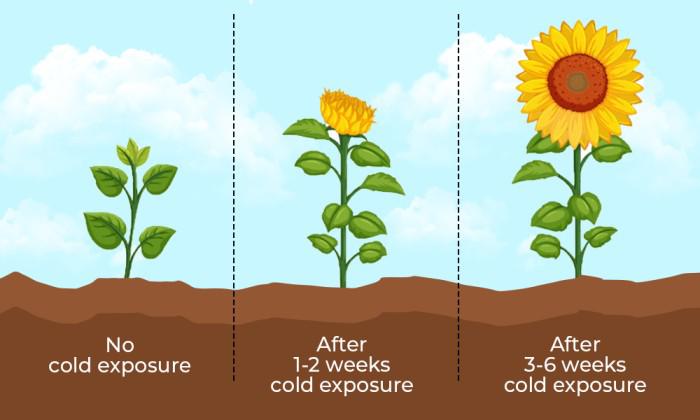 During development, most plants need time for cold treatment before they can develop into flowers when put through accurate photoperiod. In such cases, the temperature has a major effect on flowering. The light effect of temperature is secondary. Most of the cereals need this winter treatment. For this type of plant, winter cold treatment is necessary, without this they do not flower or their flowering capacity is reduced.

During the first season, a biennial plant grows only by vegetation and does not begin flowering until they do not get the required conditions of winter or low temperature. Mostly biennial crops are photo-periodically sensitive and need many days to complete the flowering process, despite the cold treatment that has been given. For example- Henbane, wheat, barley, oats, and rye. The annual plants produce flowers and fruits during a similar growing season in which plants are planted. Normally biennial plants do not produce until their required conditions are not fulfilled.

By vernalization, those plants which required winter or cold treatment to produce flowers can produce flowers until they are planted. The biennial plants do not produce in the same year. For example, in this process of vernalization biennial seed, after germination is put at a low temperature of about 0-4°C for a few weeks after that, and the seed behaves as if it has experienced cold winter after one year of growth. Now, if biennial plants are sown in the spring season such seeds produce flowers in the same year.

USSR develops this technique to shorten the time between sowing and production of crops.

Difference between photoperiodism and vernalization

Question 1: What do you mean by vernalization?

Vernalization is defined as the process by which low temperature has been provided for the flowering of biennial plants.

Vernalin hormone is responsible for vernalization.

Question 3:  What is the major effect of vernalization on plants ?

Question 5: What are the factors that govern the development in a plant ?

Previous
How does Democracy produce an Accountable, Responsive and Legitimate Government?
Next
Wildlife Sanctuary
Related Articles
1. Role of Commerce and Industry Associations in Promotion of Internal Trade
2. What are Chain or Multiple Stores?
3. What are Departmental Stores?
4. Public Deposits: Advantages and Disadvantages
5. What is Internal Trade?
6. What is Dihybrid Cross?
7. Autonomic Nervous System
8. Genetic Linkage
9. Human Urinary System
10. Chrysophytes
Article Contributed By :