Vector vs ArrayList in Java

ArrayList and Vectors both implement the List interface, and both use (dynamically resizable) arrays for their internal data structure, much like using an ordinary array.

Significant Differences between ArrayList and Vector: 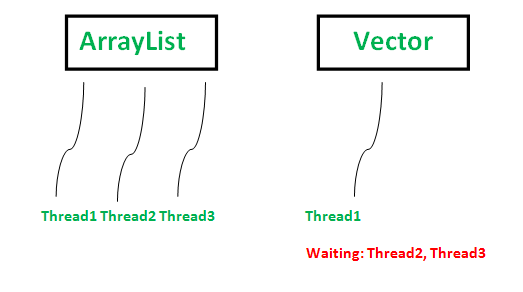 How to get Synchronized version of arraylist object:

Note: ArrayList is preferable when there is no specific requirement to use vector.

How to choose between ArrayList and Vector?

This article is contributed by Nitsdheerendra. If you like GeeksforGeeks and would like to contribute, you can also write an article using write.geeksforgeeks.org or mail your article to review-team@geeksforgeeks.org. See your article appearing on the GeeksforGeeks main page and help other Geeks. Please write comments if you find anything incorrect, or you want to share more information about the topic discussed above.