When any two-dimensional or three-dimensional plane is being intersected and cut then there are curves obtained, which are known as conic sections. In the case of a cone, there are two identical conical shapes, which are also known as capes. The shape of these conical shapes in the cone depends upon the angle that is opting in as a result of the cut between the plane and the cone. Various shapes can be obtained depending upon the difference in the curve sizes which are circle, hyperbola, ellipse, and parabola we can study these shapes in detail, wherein

The following diagram represents the various types of conic sections that are available depending on the difference in the cuts between the intersecting surface and the cone and its necks. 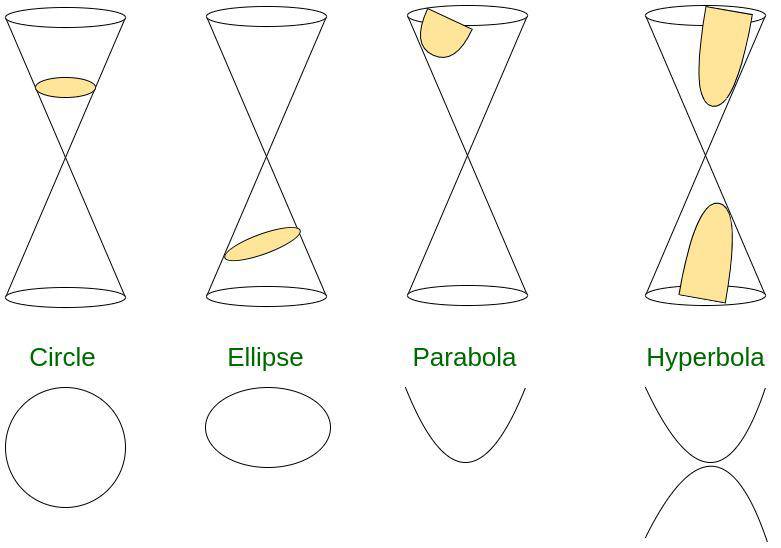 In this article, we will focus on the conical section of the circle. First, the circle has the following properties,

Radius of the Circle

Circumference of the Circle

To express the formula for the circumference of the circle we can use the radius(r) and the symbol π.

Circumference of a circle formula = 2πr 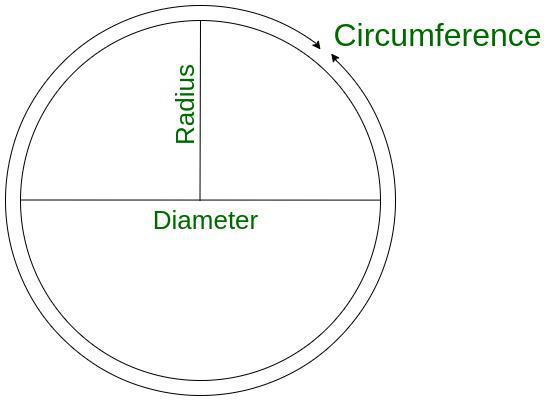 Diameter of the Circle

The radius of the circle. When multiplied by two gives us a diameter therefore, the diameter of any circle is also constant in nature because the radius is constant in nature and two multiplication of two constants always gives us a constant. Also, the diameter has two endpoints both of which lie on the circumference of the circle and it is also considered to be the maximum distance that can be obtained between any two points on the circumference of the circle. We have

‘D’ is the diameter and

‘R’ is the radius of the circle respectively.

The circle can be extended as a special case of an ellipse, the cutting plane here is parallel to the cone base. This center of the circle is the focus and the radius of the circles is also constant. The value of eccentricity of a circle is always zero that is

Now, if we assume that the center of the circle is situated in the Cartesian plane and is marked with the coordinates (h, k) where ‘h’ is the x-coordinate and ‘k’ is the y-coordinate, respectively then the general form of the equation of the circle can be expressed in the following manner.

Since, we know, equation of the circle is represented by,

Now, Substituting the values in the above equation,

Further differentiating the above equation with respect to x, 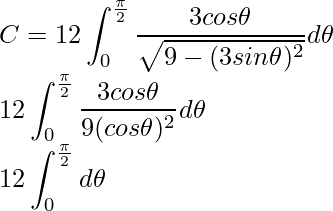 Integrating the above equation we will get

Therefore after interacting we get the circumference of the circle with a radius of 3,

Question 1: What is trigonometric substitution?

Question 2: What is a conic section in real life?

There are a large number of conic section examples in real life for example, if we consider the Sun as the focus point, then the path or the trajectory of the planets rotating around the sun forms an ellipse. And the other example is the case of parabolic mirrors, which capture the light beam at the focus of a parabola.

Question 3: What is the formula for the trigonometric equation of a circle?

To find the formula for the trigonometric equation of the circle.

Question 4: What are trigonometric identities?

Question 5: Calculate tan 45º from the unit circle by using the values of sin and cos.

Here we have to find the value of tan 45º

So according to the problem

Previous
Percarbonic Acid Formula
Next
Dual Nature of Light
Related Articles
1. Trigonometric Substitution
2. How to demonstrate that the circumference of a circle is 2pir?
3. Circumference of a Circle
4. Consider a right triangle ABC, right angled at B and If AC = 17 units and BC = 8 units, then determine all the trigonometric ratios of angle C.
5. Theorem - The tangent at any point of a circle is perpendicular to the radius through the point of contact - Circles | Class 10 Maths
6. Is radius a chord of a circle?
7. Circumference Formula
8. Integration by Substitution
9. Integration by U-substitution
10. Limits by Direct Substitution
Article Contributed By :