Urea or Carbamide is a nitrogenous compound that is commonly excreted by animals and humans as a waste product of protein metabolism. In 1727 Herman Boerhaave a Dutch chemist discovered urea. Then Friedrich Wohler a German chemist was first to synthesize urea in 1828. He converted ammonium cyanate an inorganic compound into an organic compound from animal sources. It is also called carbamide because of the groups, a carbonyl group attached to two amide groups. Carbonyl group – a carbon atom is double-bonded to an oxygen atom.

Urea is the main component of human urine. Ammonia is converted into urea by the liver and flows into blood. Then kidneys filter the urea and waste compounds from the blood. Now all the waste and urea compounds pass through the urinary tract and are excreted as a form of urine.

Urea is a colorless to white crystalline solid and it is largely used as a fertilizer. It has a density of 1.32 g/cm3. It is a nitrogen-containing compound found in urine. It is formed by the urea cycle. Urea is used as a raw material for animal feed. It has a melting point of 134˚C. Urea can absorb moisture from the atmosphere. It is highly soluble in water and urea as a chemical formula of CO(NH2)2. Urea has ill effects on long-term usage, it can cause damage to the skin.

CO(NH2)2 is the chemical formula of urea. It has a molar mass of 60.06 g/mol. It consists of carbon, nitrogen, oxygen, and hydrogen. It is formed by the two amide groups (-NH2) and is bonded to a carbonyl group (a carbon atom is double-bonded to an oxygen atom, -C=O).

Urea maintains a planar geometry (which means that all of the atoms lie in the same plane) and it is a double amide. All of the bonds are covalent (- means electrons are shared between the atoms of each bond) with nonpolar bonds between carbon and oxygen, carbon and nitrogen. 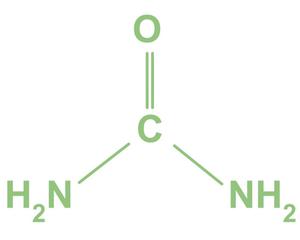 Urea can be prepared in the laboratory by the reaction of ammonia with carbonyl chloride,

Urea can also be formed by the reaction of ammonia on alkyl carbonates or diethyl carbonate,

Question 1: What are the applications of urea in the medical industry?

Urea is even used in the pharmaceutical industry. Some of the uses are: It is used in the BUN test or blood urea nitrogen test is used to measure the level of amount of the nitrogen present in the blood which comes from urea. Higher levels of urea in the body influence many biological functions like dehydration, liver functionality, and diet.

Urea is used in many creams which helps to treat rough and dry skin problems. Some of the problems include callus, eczema, corns, ingrown nails, and psoriasis. But lower levels of urea should be in usage because of its toxic properties. Urea contains keratolytic properties, it can increase the moisture in the skin which helps from dehydration. Applying to sensitive areas should be avoided.

Question 2: How urea is formed in the industry?

Question 3: How urea is formed and excreted in the human body?

It is the main component of human urine. By the breakdown of the proteins in the body. The body accumulates all the nitrogenous waste compounds. When amino acids are metabolized, they change into ammonia, water, and carbon dioxide. Then the liver converts ammonia to urea and releases it into the blood. Kidneys play important role in the filtration of urea and other parts of waste compounds in the blood. From then all the remaining waste which is filtered out is flown to the urinary tract. Then it passes through the ureters, bladder, and urethra and last it is excreted in the form of urine.

Question 4: What are the preventive and control measures for urea?

Urea has toxic properties. Here are the preventive and control measures

Question 5: Why urea is harmful to the body?

Urea is the waste that the kidneys as a role help filter away. Uremia is a side effect of kidney failure. At the point when the kidneys can’t filter waste as expected, it can enter the bloodstream. Higher urea levels propose improper kidney work. This might be because of intense or constant kidney illness. By and large, a high BUN (Blood Urea Nitrogen) level means your kidneys aren’t functioning admirably. Yet, raised BUN can likewise be because of: Dehydration, because of not drinking an adequate number of liquids, or for different reasons. Urinary tract obstruction.

Question 7: What are the applications of urea in different areas?

There are many application uses of urea in many areas. Some are,