Explanation:
From the above code, it is clear that:

Explanation:
In this example as well, the character type pointer c is storing the base address of the char array b[] and hence when used with cout, it starts printing each and every character from that base address till it encounters a NULL character. 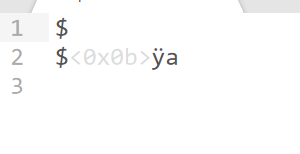 Explanation:
In the above example, c is a simple character variable and it prints the value stored in it as expected. p being a character pointer when used with cout, results in the printing of each and every character till a null character is encountered. Thus, some garbage value is being printed after ‘$’. This simply means that in the memory the null character was placed after the ‘a’ character (since in this case, there is no automatic storing of a null character after the useful piece of data is finished unlike character arrays) and so it stops printing and gives the obtained output.

The reason for this lies in the concept of Operator Overloading. ‘<<‘ operator is overloaded for different types of inputs. In the case of const void* overload, it prints just the address. But for const char* overload, it starts printing each and every character till it encounters a null character (treating the input as C — style string).

NOTE: The unusual behaviour can be rectified if the output is type casted into something which will not be treated as C-style string.
Example 5:

Explanation:
In the above example, the base address of the character array is obtained in the output.

Given a string, print the pattern as shown in the following example:

Next
Measure execution time with high precision in C/C++
Related Articles
1. Difference between constant pointer, pointers to constant, and constant pointers to constants
2. Why Does C Treat Array Parameters as Pointers?
3. What are Wild Pointers? How can we avoid?
4. Declare a C/C++ function returning pointer to array of integer pointers
5. Smart Pointers in C++ and How to Use Them
6. C Pointers
7. C++ Pointers
8. Pointers vs References in C++
9. What are near, far and huge pointers?
10. Computing Index Using Pointers Returned By STL Functions in C++
Article Contributed By :