Spring Boot is built on the top of the spring and contains all the features of spring. And is becoming a favorite of developers these days because of its rapid production-ready environment which enables the developers to directly focus on the logic instead of struggling with the configuration and setup. Spring Boot is a microservice-based framework and making a production-ready application in it takes very little time. Following are some of the features of Spring Boot:

Mockito is an open-source testing framework used for unit testing of Java applications. It plays a vital role in developing testable applications. Mockito is used to mock interfaces so that a dummy functionality can be added to a mock interface that can be used in Unit Testing. Unit Testing is a type of software testing in which individual components of the software are tested. The major objective of using the Mockito framework is to simplify the development of a test by mocking external dependencies and using them in the test code. And as a result, Mockito provides a simpler test code that is easier to understand, more readable, and modifiable. Mockito can also be used with other testing frameworks like JUnit and TestNG. JUnit framework is a Java framework that is also used for testing. Now, JUnit is used as a standard when there is a need to perform testing in Java. So in this article, we are going to perform Unit Testing in Spring Boot Project using Mockito and Junit.

Step 2: Add the following dependency as listed below as follows:


Step 3: Create the packages and files as seen in the below image. Below is the complete file structure fo this project. 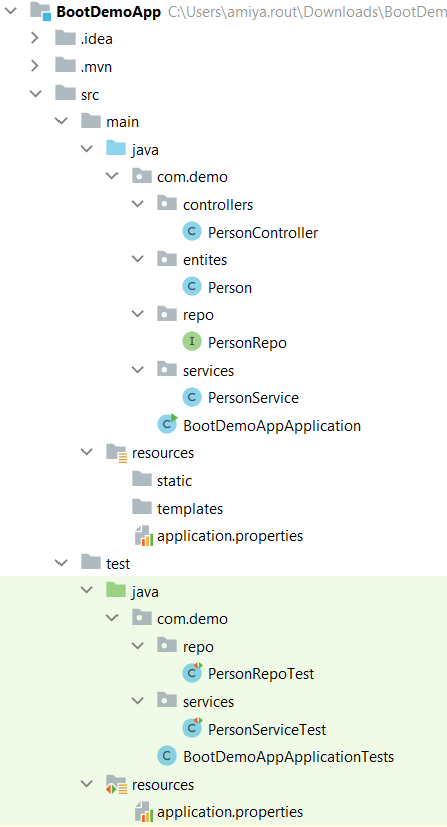 Step 4: Inside the entity package

It is done via creating a simple POJO class inside the Person.java file.


Step 5: Inside the repository package

Create a simple interface and name the interface as PersonRepo. This interface is going to extend the JpaRepository.


Step 6: Inside the service package

Inside the package create one class named as PersonService.


Step 7: Inside the controller package

Inside the package create one class named as PersonController.


Step 8: Below is the code for the application.properties file

Now your sample spring boot project is ready and we are going to perform unit testing in this sample project.

Step 9: Create the following packages and the classes as shown in the below image. (Inside the green color box) 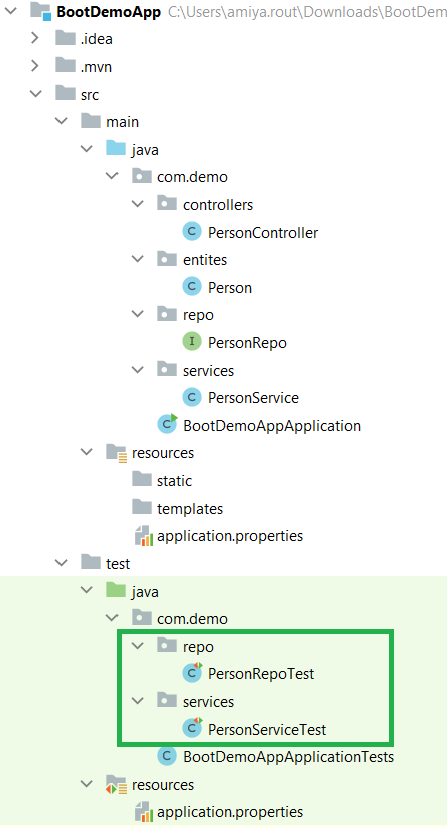 Inside the test > repo package create one class named as PersonRepoTest.

Inside the test > services package create one class named as PersonServiceTest.


Similarly, we can perform testing of different units of your spring boot project.