The Network allows computers to connect and communicate with different computers via any medium. LAN, MAN, and WAN are the three major types of networks designed to operate over the area they cover. There are some similarities and dissimilarities between them. One of the major differences is the geographical area they cover, i.e. LAN covers the smallest area; MAN covers an area larger than LAN and WAN comprises the largest of all.
There are other types of Computer Networks also, like :

LAN or Local Area Network connects network devices in such a way that personal computers and workstations can share data, tools, and programs. The group of computers and devices are connected together by a switch, or stack of switches, using a private addressing scheme as defined by the TCP/IP protocol. Private addresses are unique in relation to other computers on the local network. Routers are found at the boundary of a LAN, connecting them to the larger WAN.

Data transmits at a very fast rate as the number of computers linked is limited. By definition, the connections must be high speed and relatively inexpensive hardware (Such as hubs, network adapters, and Ethernet cables). LANs cover a smaller geographical area (Size is limited to a few kilometers) and are privately owned. One can use it for an office building, home, hospital, schools, etc. LAN is easy to design and maintain. A Communication medium used for LAN has twisted-pair cables and coaxial cables. It covers a short distance, and so the error and noise are minimized.

Early LANs had data rates in the 4 to 16 Mbps range. Today, speeds are normally 100 or 1000 Mbps. Propagation delay is very short in a LAN. The smallest LAN may only use two computers, while larger LANs can accommodate thousands of computers. A LAN typically relies mostly on wired connections for increased speed and security, but wireless connections can also be part of a LAN. The fault tolerance of a LAN is more and there is less congestion in this network. For example A bunch of students playing Counter-Strike in the same room (without internet).

MAN or Metropolitan area Network covers a larger area than that of a LAN and smaller area as compared to WAN. It connects two or more computers that are apart but reside in the same or different cities. It covers a large geographical area and may serve as an ISP (Internet Service Provider). MAN is designed for customers who need high-speed connectivity. Speeds of MAN range in terms of Mbps. It’s hard to design and maintain a Metropolitan Area Network. 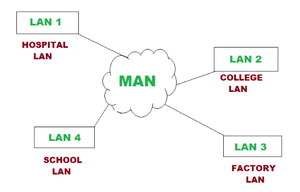 The fault tolerance of a MAN is less and also there is more congestion in the network. It is costly and may or may not be owned by a single organization. The data transfer rate and the propagation delay of MAN are moderate. Devices used for transmission of data through MAN are Modem and Wire/Cable. Examples of a MAN are the part of the telephone company network that can provide a high-speed DSL line to the customer or the cable TV network in a city.

WAN or Wide Area Network is a computer network that extends over a large geographical area, although it might be confined within the bounds of a state or country. A WAN could be a connection of LAN connecting to other LANs via telephone lines and radio waves and may be limited to an enterprise (a corporation or an organization) or accessible to the public. The technology is high speed and relatively expensive.

There are two types of WAN: Switched WAN and Point-to-Point WAN. WAN is difficult to design and maintain. Similar to a MAN, the fault tolerance of a WAN is less and there is more congestion in the network. A Communication medium used for WAN is PSTN or Satellite Link. Due to long-distance transmission, the noise and error tend to be more in WAN.

WAN’s data rate is slow about a 10th LAN’s speed since it involves increased distance and increased number of servers and terminals etc. Speeds of WAN ranges from a few kilobits per second (Kbps) to megabits per second (Mbps). Propagation delay is one of the biggest problems faced here. Devices used for the transmission of data through WAN are Optic wires, Microwaves, and Satellites. An example of a Switched WAN is the asynchronous transfer mode (ATM) network and Point-to-Point WAN is a dial-up line that connects a home computer to the Internet.

There are many advantages of LAN over MAN and WAN, such as LAN’s provide excellent reliability, high data transmission rate, they can easily be managed and shares peripheral devices too. Local Area Network cannot cover cities or towns and for that Metropolitan Area Network is needed, which can connect a city or a group of cities together. Further, for connecting a Country or a group of Countries one requires a Wide Area Network.