The conventional steps that are followed while formulating the hypothesis test, are listed as follows

Generally, hypothesis testing is performed to estimate the population mean and population proportion, in this article let us discuss how to perform a two-tailed population proportion test. A two-tailed test in general is a method in which the critical area of a distribution is two-sided (both extremes) and tests whether a sample is greater than or less than a specific range of values. 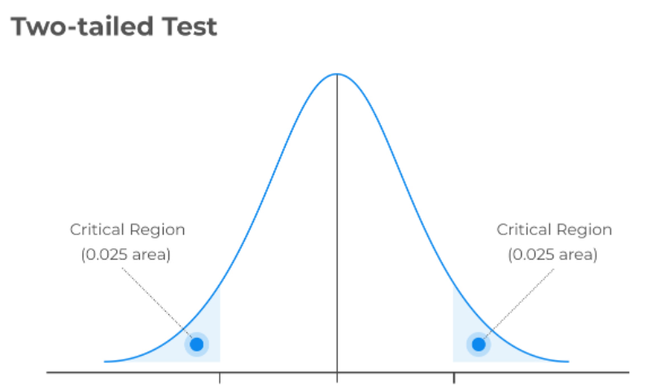 Hypothesis testing for proportions involves measuring two outcomes, like success or failure, true or false, good or bad, and so on in a defined set of trials. The probability of getting success or failure should be the same throughout the trial.

Null Hypothesis: The probability of any transaction being fraudulent is 5% p = po (Here, po = 0.05)

Alternate Hypothesis: The probability of any transaction being fraudulent is not equal to 5%  p != po

Let us define the test statistic as follows

Now let us compute the critical values at a 0.05 significance level.

The computed test statistic 0.68824720 lies between the critical values -1.9600 and 1.9600. Hence, at the .05 significance level, we fail to reject the null hypothesis. In other words, we don’t have enough evidence to conclude that the probability of a fraudulent transaction is not equal to 5%.