Transportation in plants is a phenomenon in which plants need to transport water, minerals, and food materials from one part to another. Plants lack both interstitial fluid as well as a regular circulation system. Indeed they have to move(transport) several types of substances not only to short distances but also to very long distances. Substances move over short distances through diffusion and active transport boosted by Cytoplasmic streaming. Long-distance transport does through vascular systems, xylem, and phloem. This transport of substances over longer distances through the vascular tissue is called translocation. It occurs through mass flow. Translocation operates each of two due to a positive hydrostatic pressure gradient as in phloem or a negative hydrostatic pressure gradient as in xylem. The direction of translocation is basically unidirectional in the case of water(from root to stem, leaves, flowers, and fruits). It is multidirectional in the case of minerals and organic solutes. Organic compounds are synthesized in leaves. They are exported to all parts including every living cell, growing points, fruits, and storehouse organs.

Passage of materials into and out of the cells is carried out by a number of methods- diffusion, facilitated diffusion, and active transport. 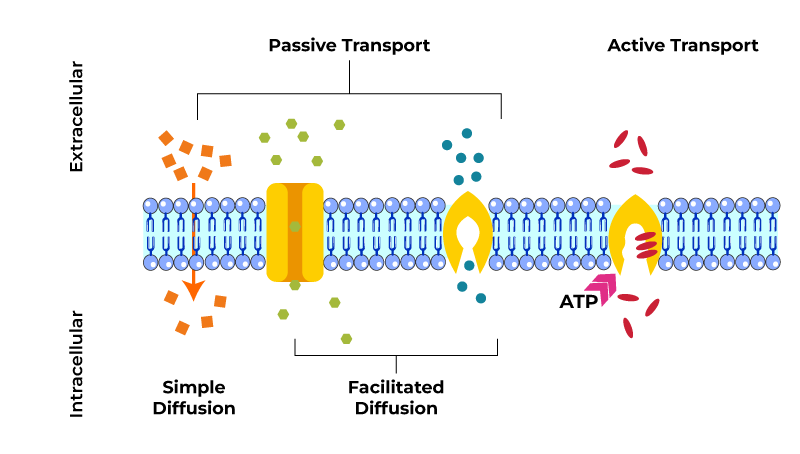 Movement by diffusion is passive and slow. It occurs along the concentration gradient. In diffusion, molecules move in a random fashion, the net result being substances moving from regions of higher concentration to regions of lower concentration. Moreover, it is a slow process and is not dependent on a ‘living system’. Diffusion is seen in gases and liquids, but diffusion in solids rather than of solids is more likely. Diffusion is very important to plants since it is the only means for gaseous movement within the plant body. Diffusion rates are affected by the gradient of concentration, the permeability of the membrane separating them, temperature, and pressure.

Particles that are lipid soluble can easily pass directly through the cell membrane as it is almost entirely made of it. The hydrophilic solutes, find it delicate to pass through the membrane. Their movement has to be eased. For this, the membranes possess aquaporins and ion channels.

Eight different types of aquaporins or water channels have been recorded. Aquaporins are membrane proteins for the passive transport of water-soluble substances. They do not set up a concentration gradient. No energy is utilized. The diffusion of hydrophilic substances along the concentration gradient through fixed membrane transport protein without involving energy spending is called facilitated diffusion. This diffusion is very specific as it allows cells to select substances for uptake. It is sensitive to inhibitors, furthermore, shows a saturation effect. Two major types of transport proteins are known viz., carrier proteins(also called carriers, transporters) and channel proteins. Carrier proteins bind the particular solute to be transported and deliver the same to the other side of the membrane. Channel proteins are usually gated, i.e., they may be open or closed. When the ‘gate’ is open, the solute of an appropriate size may diffuse.

Ion channels allow passage of their own specific ions. They are often gated- voltage-gated, mechanical-gated, ligand-gated. The gates open under specific conditions, e.g., K+  channels in nerve conduction. Certain pores called porins are present in the external membrane of plastids, mitochondria, and some bacteria.

Pumps are proteins that use energy to carry substances across the cell membrane. These pumps can transport substances from low attention to high attention(‘uphill’ transport). The transport rate reaches a  maximum when all the protein transporters are being used or are saturated. Like enzymes, the carrier protein is very specific in what it carries across the membrane. These proteins are sensitive to impediments that inhibit protein side chains. Active transport is faster than passive transport.

Some carrier proteins allow transport only if two types of molecules move together. This is called Cotransport. It is of two types. In the symport system of cotransport, both molecules cross the membrane in the same direction at the same time. In the antiport system of cotransport, both molecules move in the opposite direction. When a molecule moves across a membrane independent of another molecule, the process is called uniport.

Question 1: What do you mean by Transportation in plants?

Transportation in plants is a phenomenon in which plants need to transport water, minerals, and food materials from one part to another. They do this with the help of xylem and phloem.

Question 2: What is the means of transport in plants?

Passage of materials into and out of the cells is carried out by a number of methods- diffusion, facilitated diffusion, and active transport.

In the symport system of cotransport, both molecules cross the membrane in the same direction at the same time.

Question 4: What is facilitated diffusion?

The diffusion of hydrophilic substances along the concentration gradient through fixed membrane transport protein without involving energy expenditure is called facilitated diffusion.

Question 5: What is the direction of translocation in the case of water?

The direction of translocation is basically unidirectional in the case of water(from root to stem, leaves, flowers, and fruits).

Previous
Sugar Formula - Structure, Properties, Uses, Sample Questions
Next
Distinguish between Agro-based and Mineral based Industries
Related Articles
1. Means of Transportation In Plants
2. Excretion In Plants - Definition, Types, Transpiration, Examples
3. Do Plants Breathe?
4. Transpiration in Plants - Overview, Types, Factors and Significance
5. Life Process in Plants and Animals
6. Phases of Growth In Plants - Growth Rates
7. Role of Macro and Micro-Nutrients in Plants
8. Respiration In Plants
9. Are Plants and Animals Made of Same Types of Tissues?
10. Coordination in Plants
Article Contributed By :