Deoxyribonucleic acid, a polymer composed of two polynucleotide chains that coil around one another to form a double helix, carries the genetic material required for the growth, development, and reproduction of all recognized species as well as a number of viruses. DNA and ribonucleic acid are examples of nucleic acids. Nucleic acids are one of the four primary classes of macromolecules, together with proteins, lipids, and complex carbohydrates (polysaccharides), that are essential for all known forms of life.

Transcriptional regulation sets the stage for gene expression. In this process, the DNA sequence of a gene is translated into RNA. Before transcription can start, the DNA double helix must unwind close to the gene being transcribed. A transcription bubble is a name for the exposed region of DNA.

One of the two exposed DNA strands, known as the template strand, serves as a template for transcription. The RNA product is essentially identical to the nontemplate (or coding) strand of DNA and is complementary to the template strand. There is one significant distinction, though: all of the T nucleotides in the freshly created RNA have been switched out for U nucleotides. 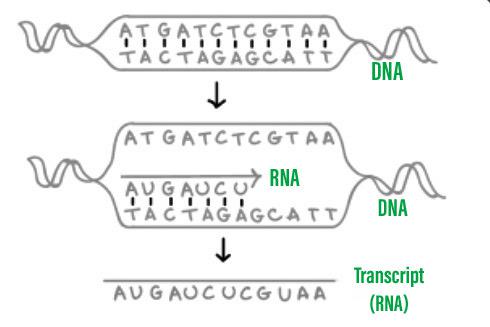 The RNA molecule will be read to create a protein in a process known as a translation if the gene being transcribed encodes one. 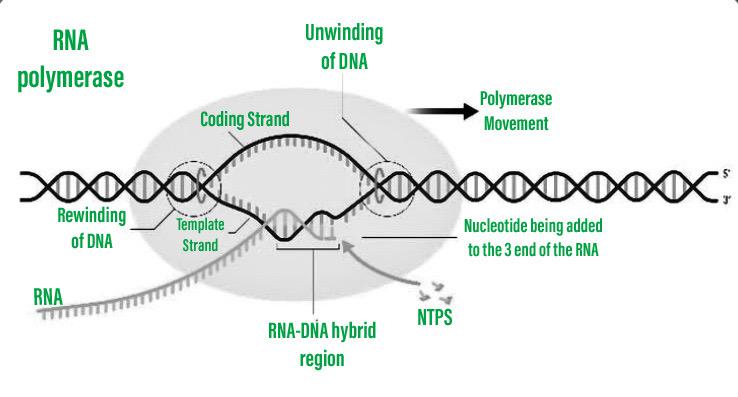 A new RNA strand is always created by RNA polymerase going from 5′ to 3′. The 3′ end of the strand can only add RNA nucleotides (A, U, C, or G).

Even in small animals like bacteria, RNA polymerases are substantial enzymes with several subunits. I, II, and III are the three varieties of RNA polymerase found in humans and other eukaryotes. Each one specializes in the transcription of particular gene classes. Additionally, plants have RNA polymerase IV and V, which are used in the production of certain short RNAs.

Each gene has its own promoter, or each group of genes transcribed together in bacteria. DNA sequences found in a promoter allow RNA polymerase or its support proteins to bind to the DNA. The polymerase can begin transcription as soon as the transcription bubble has formed.

Let’s examine a case from bacteria to better understand how a promoter functions. Two significant DNA sequences, the -10 and -35 elements, can be found in a typical bacterial promoter.

These sequences are recognized by and directly bind to RNA polymerase. The sequences ensure that the polymerase is in the proper location to begin transcription of a target gene and that it is pointing in the right direction.

After binding, the RNA polymerase may access the DNA and begin working. DNA opens at the -10 element, where the abundance of As and Ts makes it simple for the strands to separate (which bind to each other using just two hydrogen bonds, rather than the three hydrogen bonds of Gs and Cs).

Because they are 35 and 10 nucleotides and +1 in the DNA, respectively, before the initiation site, the -10 and -35 elements are so named. They are simply before, not after, the place of initiation, as shown by the minus marks.

TATA boxes are a common component of eukaryotic promoters. The TATA box performs similar functions to bacteria’s -10 element. One of the general transcription factors recognizes it, which then makes it possible for other transcription factors and ultimately RNA polymerase to bind. Additionally, it has a lot of As and Ts, which make it simple to separate the DNA strands.

The majority of transcription inhibitors have helpful pharmacological characteristics, and many anti-cancer medications also suppress transcription. Transcription inhibition is necessary for many investigations. Thermosensitive changes to the RNA polymerase (RNAP) subunits in yeast are useful tools. Rpb1, the major subunit of mammalian RNAP II, has a thermosensitive mutation that has been identified. However, transcription is kept going for at least a day at temperatures that are not allowed, which is a significant inconvenience. Therefore, it is typically recommended to use the terms “chemical genetics” or “chemical biology.”

The subsequent stage of transcription, elongation, can start once RNA polymerase has positioned itself at the promoter. Elongation is the process by which the RNA strand lengthens as a result of the insertion of additional nucleotides.

The RNA transcript and the non-template, or coding, strand of DNA are almost similar. The base uracil (U) is substituted for thymine (T) in RNA strands, and the sugar in the nucleotide is somewhat different. Therefore, each T of the coding strand is replaced with a U in the RNA transcript.

Until it receives instructions to halt, RNA polymerase will continue to transcribe. Termination, which occurs when the polymerase transcribes a DNA sequence known as a terminator, is the process of stopping transcription.

A Rho factor-binding site is present in the RNA during Rho-dependent termination. In order to reach RNA polymerase, the Rho factor attaches to this region and begins to “climb” the transcript. 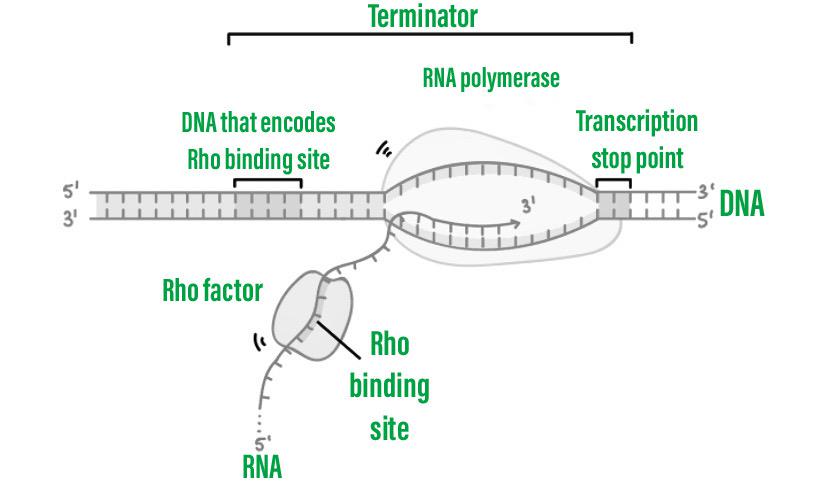 Rho pulls the template DNA strand and the RNA transcript apart when it reaches the polymerase at the transcription bubble, releasing the RNA molecule and terminating transcription. The transcription stop point, a later sequence discovered in the DNA, stops RNA polymerase, which allows Rho to catch up.

Specific DNA template strand sequences are required for rho-independent termination. A region with a high concentration of C and G nucleotides is reached by the RNA polymerase as it nears the end of the gene being transcribed. The complementary C and G nucleotides join together as the RNA that comes from this area folds back on itself. The outcome is a steady hairpin that stops the polymerase.

A stretch of U nucleotides in the RNA that align with A nucleotides in the template DNA follows the hairpin in a terminator. Only a minimal connection between the corresponding U-A region of the RNA transcript and the template DNA is created. This causes enough instability when combined with the stalled polymerase, for the enzyme to detach and release the new RNA transcript.

Question 1: Where does the transcription process start and end?

When RNA polymerase connects to a promoter sequence near the start of a gene, transcription starts (directly or through helper proteins). To create a fresh, complementary RNA molecule, RNA polymerase employs one of the DNA strands (the template strand) as a template. Termination is the procedure that puts a stop to transcription.

Question 3: What results from the transcription?

Transcription from a DNA strand results in the production of an RNA strand. The primary transcript is the complementary, antiparallel RNA strand that results from a DNA sequence.

Question 4: What does transcription require?

In order for one strand of the DNA double helix to serve as the template for RNA synthesis, transcription needs that partially unwind. A transcription bubble is a term used to describe the unwinding area.

The process of decoding a cell’s genetic code begins with transcription. RNA polymerases are enzymes that construct RNA molecules during transcription that are complementary to a section of one strand of the DNA double helix.

Question 6: Why does transcription require protein?

Making a copy of the DNA sequence of a gene in RNA is the aim of transcription. The information required to create a polypeptide is carried by the RNA copy, or transcript, for a gene that codes for proteins (protein or protein subunit). Before being translated into proteins, eukaryotic transcripts must go through a number of processing steps.