Data Visualization is an extremely important part of Data Analysis. After all, there is no better way to understand the hidden patterns and layers in the data than seeing them in a visual format! Don’t trust me? Well, assume that you analyzed your company data and found out that a particular product was consistently losing money for the company. Your boss may not pay that much attention to a written report but if you present a line chart with the profits as a red line that is consistently going down, then your boss may pay much more attention! This shows the power of Data Visualization! 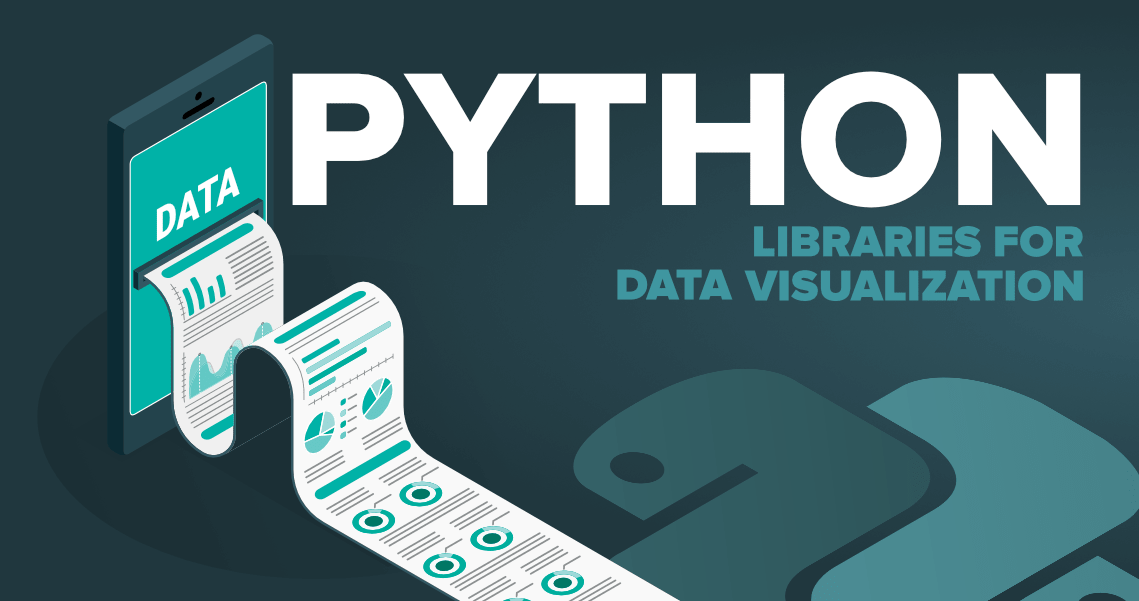 Humans are visual creatures and hence, data visualization charts like bar charts, scatterplots, line charts, geographical maps, etc. are extremely important. They tell you information just by looking at them whereas normally you would have to read spreadsheets or text reports to understand the data. And Python is one of the most popular programming languages for data analytics as well as data visualization. There are several libraries available in recent years that create beautiful and complex data visualizations. These libraries are so popular because they allow analysts and statisticians to create visual data models easily according to their specifications by conveniently providing an interface, data visualization tools all in one place! This article demonstrates the Top 10 Python Libraries for Data Visualization that are commonly used these days.

Matplotlib is a data visualization library and 2-D plotting library of Python It was initially released in 2003 and it is the most popular and widely-used plotting library in the Python community. It comes with an interactive environment across multiple platforms. Matplotlib can be used in Python scripts, the Python and IPython shells, the Jupyter notebook, web application servers, etc. It can be used to embed plots into applications using various  GUI toolkits like Tkinter, GTK+, wxPython, Qt, etc. So you can use Matplotlib to create plots, bar charts, pie charts, histograms, scatterplots, error charts, power spectra, stemplots, and whatever other visualization charts you want! The Pyplot module also provides a MATLAB-like interface that is just as versatile and useful as MATLAB while being free and open source.

Plotly is a free open-source graphing library that can be used to form data visualizations. Plotly (plotly.py) is built on top of the Plotly JavaScript library (plotly.js) and can be used to create web-based data visualizations that can be displayed in Jupyter notebooks or web applications using Dash or saved as individual HTML files. Plotly provides more than 40 unique chart types like scatter plots, histograms, line charts, bar charts, pie charts, error bars, box plots, multiple axes, sparklines, dendrograms, 3-D charts, etc. Plotly also provides contour plots, which are not that common in other data visualization libraries. In addition to all this, Plotly can be used offline with no internet connection.

Seaborn is a Python data visualization library that is based on Matplotlib and closely integrated with the NumPy and pandas data structures. Seaborn has various dataset-oriented plotting functions that operate on data frames and arrays that have whole datasets within them. Then it internally performs the necessary statistical aggregation and mapping functions to create informative plots that the user desires. It is a high-level interface for creating beautiful and informative statistical graphics that are integral to exploring and understanding data. The Seaborn data graphics can include bar charts, pie charts, histograms, scatterplots, error charts, etc. Seaborn also has various tools for choosing color palettes that can reveal patterns in the data.

Ggplot is a Python data visualization library that is based on the implementation of ggplot2 which is created for the programming language R. Ggplot can create data visualizations such as bar charts, pie charts, histograms, scatterplots, error charts, etc. using high-level API. It also allows you to add different types of data visualization components or layers in a single visualization. Once ggplot has been told which variables to map to which aesthetics in the plot, it does the rest of the work so that the user can focus on interpreting the visualizations and take less time in creating them. But this also means that it is not possible to create highly customized graphics in ggplot. Ggplot is also deeply connected with pandas so it is best to keep the data in DataFrames.

Altair is a statistical data visualization library in Python. It is based on Vega and Vega-Lite which are a sort of declarative language for creating, saving, and sharing data visualization designs that are also interactive. Altair can be used to create beautiful data visualizations of plots such as bar charts, pie charts, histograms, scatterplots, error charts, power spectra, stemplots, etc. using a minimal amount of coding. Altair has dependencies which include python 3.6, entrypoints, jsonschema, NumPy, Pandas, and Toolz which are automatically installed with the Altair installation commands. You can open Jupyter Notebook or JupyterLab and execute any of the code to obtain that data visualizations in Altair. Currently, the source for Altair is available on GitHub.

Bokeh is a data visualization library that provides detailed graphics with a high level of interactivity across various datasets, whether they are large or small. Bokeh is based on The Grammar of Graphics like ggplot but it is native to Python while ggplot is based on ggplot2 from R. Data visualization experts can create various interactive plots for modern web browsers using bokeh which can be used in interactive web applications, HTML documents, or JSON objects. Bokeh has 3 levels that can be used for creating visualizations. The first level focuses only on creating the data plots quickly, the second level controls the basic building blocks of the plot while the third level provides full autonomy for creating the charts with no pre-set defaults. This level is suited to the data analysts and IT professionals that are well versed in the technical side of creating data visualizations.

Pygal is a Python data visualization library that is made for creating sexy charts! (According to their website!) While Pygal is similar to Plotly or Bokeh in that it creates data visualization charts that can be embedded into web pages and accessed using a web browser, a primary difference is that it can output charts in the form of SVG’s or Scalable Vector Graphics. These SVG’s ensure that you can observe your charts clearly without losing any of the quality even if you scale them. However, SVG’s are only useful with smaller datasets as too many data points are difficult to render and the charts can become sluggish.

Most of the data visualization libraries don’t provide much support for creating maps or using geographical data and that is why geoplotlib is such an important Python library. It supports the creation of geographical maps in particular with many different types of maps available such as dot-density maps, choropleths, symbol maps, etc. One thing to keep in mind is that requires NumPy and pyglet as prerequisites before installation but that is not a big disadvantage. Especially since you want to create geographical maps and geoplotlib is the only excellent option for maps out there!

In conclusion, all these Python Libraries for Data Visualization are great options for creating beautiful and informative data visualizations. Each of these has its strong points and advantages so you can select the one that is perfect for your data visualization or project. For example, Matplotlib is extremely popular and well suited to general 2-D plots while Geoplotlib is uniquely suite to geographical visualizations. So go on and choose your library to create a stunning visualization in Python!