Data science is an extremely important field in current times! So much so that data scientist is now called the “Sexiest Job of the 21st century” when nobody expected geeky jobs to ever be sexy! But Data Science is sexy now and that is because of the immense value of data. And Python is one of the best programming languages to extract value from this data because of its capacity for statistical analysis, data modeling, and easy readability. 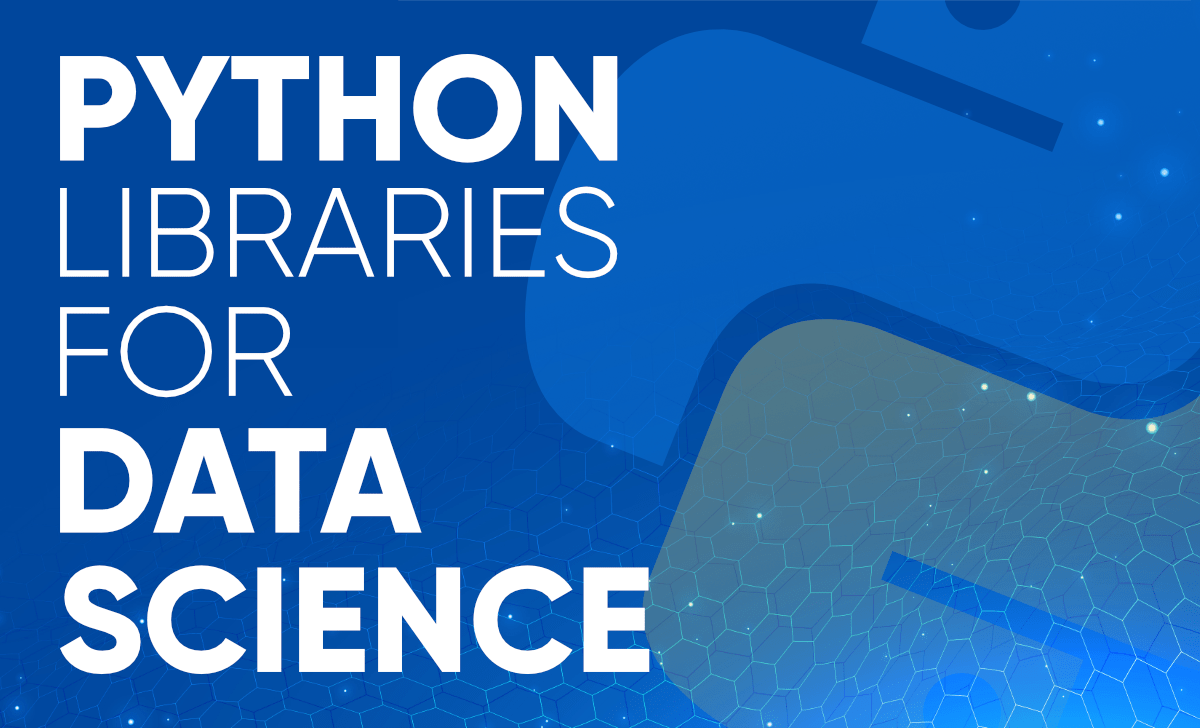 Another reason for this huge success of Python in Data Science is its extensive library support for data science and analytics. There are many Python libraries that contain a host of functions, tools, and methods to manage and analyze data. Each of these libraries has a particular focus with some libraries managing image and textual data, data mining, neural networks, data visualization, and so on. Here we have divided the top 10 Python libraries for Data Science into those focusing on data processing and data visualization respectively. So let’s check out these libraries now!

Pandas is a free Python software library for data analysis and data handling. It was created as a community library project and initially released around 2008. Pandas provides various high-performance and easy-to-use data structures and operations for manipulating data in the form of numerical tables and time series. Pandas also has multiple tools for reading and writing data between in-memory data structures and different file formats. In short, it is perfect for quick and easy data manipulation, data aggregation, reading, and writing the data as well as data visualization. Pandas can also take in data from different types of files such as CSV, excel etc.or a SQL database and create a Python object known as a data frame. A data frame contains rows and columns and it can be used for data manipulation with operations such as join, merge, groupby, concatenate etc.

NumPy is a free Python software library for numerical computing on data that can be in the form of large arrays and multi-dimensional matrices. These multidimensional matrices are the main objects in NumPy where their dimensions are called axes and the number of axes is called a rank. NumPy also provides various tools to work with these arrays and high-level mathematical functions to manipulate this data with linear algebra, Fourier transforms, random number crunchings, etc. Some of the basic array operations that can be performed using NumPy include adding, slicing, multiplying, flattening, reshaping, and indexing the arrays. Other advanced functions include stacking the arrays, splitting them into sections, broadcasting arrays, etc.

SciPy is a free software library for scientific computing and technical computing on the data. It was created as a community library project and initially released around 2001. SciPy library is built on the NumPy array object and it is part of the NumPy stack which also includes other scientific computing libraries and tools such as Matplotlib, SymPy, pandas etc. This NumPy stack has users which also use comparable applications such as GNU Octave, MATLAB, GNU Octave, Scilab, etc. SciPy allows for various scientific computing tasks that handle data optimization, data integration, data interpolation, and data modification using linear algebra, Fourier transforms, random number generation, special functions, etc. Just like NumPy, the multidimensional matrices are the main objects in SciPy, which are provided by the NumPy module itself.

Scikit-learn is a free software library for Machine Learning coding primarily in the Python programming language.  It was initially developed as a Google Summer of Code project by David Cournapeau and originally released in June 2007. Scikit-learn is built on top of other Python libraries like NumPy, SciPy,  Matplotlib, Pandas, etc. and so it provides full interoperability with these libraries.  While Scikit-learn is written mainly in Python, it has also used Cython to write some core algorithms in order to improve performance. You can implement various Supervised and Unsupervised Machine learning models on Scikit-learn like Classification, Regression, Support Vector Machines, Random Forests, Nearest Neighbors, Naive Bayes, Decision Trees, Clustering, etc. with Scikit-learn.

TensorFlow is a free end-to-end open-source platform that has a wide variety of tools, libraries, and resources for Artificial Intelligence. It was developed by the Google Brain team and initially released on November 9, 2015.  You can easily build and train Machine Learning models with high-level API’s such as Keras using TensorFlow. It also provides multiple levels of abstraction so you can choose the option you need for your model. TensorFlow also allows you to deploy Machine Learning models anywhere such as the cloud, browser, or your own device. You should use TensorFlow Extended (TFX) if you want the full experience, TensorFlow Lite if you want usage on mobile devices, and TensorFlow.js if you want to train and deploy models in JavaScript environments. TensorFlow is available for Python and C APIs and also for C++, Java, JavaScript, Go, Swift, etc. but without an API backward compatibility guarantee. Third-party packages are also available for MATLAB, C#, Julia, Scala, R, Rust, etc.

Keras is a free and open-source neural-network library written in Python. It was primarily created by François Chollet, a Google engineer, and initially released on 27 March 2015. Keras was created to be user friendly, extensible, and modular while being supportive of experimentation in deep neural networks. Hence, it can be run on top of other libraries and languages like TensorFlow, Theano, Microsoft Cognitive Toolkit, R, etc. Keras has multiple tools that make it easier to work with different types of image and textual data for coding in deep neural networks. It also has various implementations of the building blocks for neural networks such as layers, optimizers, activation functions, objectives, etc. You can perform various actions using Keras such as creating custom function layers, writing functions with repeating code blocks that are multiple layers deep, etc.

Matplotlib is a data visualization library and 2-D plotting library of Python It was initially released in 2003 and it is the most popular and widely-used plotting library in the Python community. It comes with an interactive environment across multiple platforms. Matplotlib can be used in Python scripts, the Python and IPython shells, the Jupyter notebook, web application servers etc. It can be used to embed plots into applications using various  GUI toolkits like Tkinter, GTK+, wxPython, Qt, etc. So you can use Matplotlib to create plots, bar charts, pie charts, histograms, scatterplots, error charts, power spectra, stemplots, and whatever other visualization charts you want! The Pyplot module also provides a MATLAB-like interface that is just as versatile and useful as MATLAB while being totally free and open source.

Seaborn is a Python data visualization library that is based on Matplotlib and closely integrated with the numpy and pandas data structures. Seaborn has various dataset-oriented plotting functions that operate on data frames and arrays that have whole datasets within them. Then it internally performs the necessary statistical aggregation and mapping functions to create informative plots that the user desires. It is a high-level interface for creating beautiful and informative statistical graphics that are integral to exploring and understanding data. The Seaborn data graphics can include bar charts, pie charts, histograms, scatterplots, error charts, etc. Seaborn also has various tools for choosing color palettes that can reveal patterns in the data.

Plotly is a free open-source graphing library that can be used to form data visualizations. Plotly (plotly.py) is built on top of the Plotly JavaScript library (plotly.js) and can be used to create web-based data visualizations that can be displayed in Jupyter notebooks or web applications using Dash or saved as individual HTML files. Plotly provides more than 40 unique chart types like scatter plots, histograms, line charts, bar charts, pie charts, error bars, box plots, multiple axes, sparklines, dendrograms, 3-D charts, etc. Plotly also provides contour plots, which are not that common in other data visualization libraries. In addition to all this, Plotly can be used offline with no internet connection.

Ggplot is a Python data visualization library that is based on the implementation of ggplot2 which is created for the programming language R. Ggplot can create data visualizations such as bar charts, pie charts, histograms, scatterplots, error charts, etc. using high-level API. It also allows you to add different types of data visualization components or layers in a single visualization. Once ggplot has been told which variables to map to which aesthetics in the plot, it does the rest of the work so that the user can focus on interpreting the visualizations and take less time in creating them. But this also means that it is not possible to create highly customised graphics in ggplot. Ggplot is also deeply connected with pandas so it is best to keep the data in DataFrames.