Ratio & Proportion is one of the most basic & easiest topics of the SSC exam. Questions from this chapter are usually asked in conjunction with the other concepts. About 3-4 questions are usually asked in preliminary examination that involves the usage of concepts of ratio & proportion.

Let’s start with the basic definition of Ratio & Proportion.

It tells us about the relation between the two numbers.

It is the equality of two ratios. Many students often remain confused about the basic definition of Ratio & Proportion. Here we will try to clear that confusion.

Now let us try to understand some basic fundamentals of ratio that are usually used in questions asked in SSC exam through questions. We will also do some mixed problems of different topics involving the usage of ratio & proportion.

Write, the ratio in this format & then fill the blank spaces (mentioned with numbers in bracket) with the nearest number. Then, multiply vertically & you will get the answer.

Solution: Now, if we approach this question using the basic method, it will take a lot of time. Use the shortcut described above to solve this problem.

We have written all the given ratios in this format.

Now fill the empty spaces with the nearest number

Solution. Multiply the numerator with 4×7×12, we get

Illustration 4. If 2 numbers are in the ratio of 4:7. If 9 is added to both the numbers, the ratio becomes 7:10. Find the sum of the original numbers?

Solution: When 9 is added to both the numbers, 4 becomes 7 (in antecedent) & 7 becomes 10 (in consequent). It means the addition of 9 is equivalent to 3 units.

Illustration 5.  If the Ratio of A:B in a mixture is 4:9 and after adding 9 litres of liquid B the ratio now becomes 1:3. Find the original quantity if liquid A in the mixture?

Solution. As capacity is equal, so, making the capacity equal first & then adding. 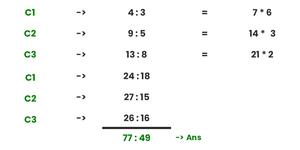 Illustration 8. 150 litres of a mixture contains milk & water in a ratio of 13:2. After the addition of some more milk to it, the ratio of milk to water now becomes 9:1. The quantity of milk that was added to the mixture was? 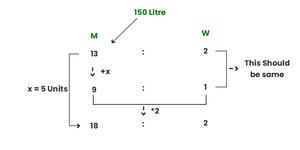 Illustration 9. A container has a mixture of 2 liquids in a ratio of 7:5. When 9 litres of the mixture are drawn off & filled with B, the ratio now becomes 7: 8. Find the quantity of the initial mixture? 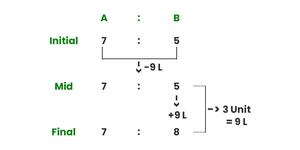 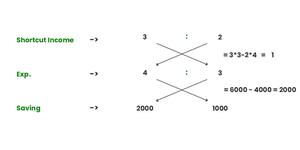 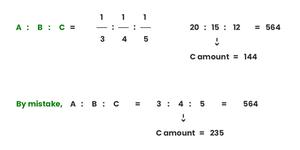 Illustration 13. A man covers a long journey by train, bus & rikshaw in the ratio 4:5:2. The ratio of the fair is 2:3:1. The total expenditure was 500. Then the expenditure on the train was?

Solution. As shown in the picture below, this question is based on a compounded ratio. Expenditure on train= 160 Rs 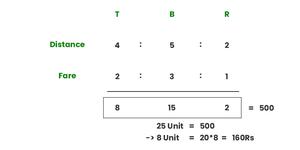 Illustration 14. If we increase the price of the movie ticket in the ratio 10:11. The number of tickets sold decreases in the ratio of 10:9. Then the loss in the revenue of the theatre is? 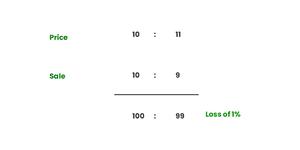 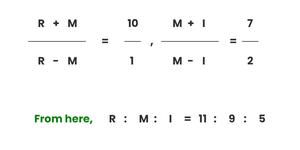