TCS Codevita Pre-qualifier Round which was held on 15th August 2020 by TCS to filter out the candidates that suits  there company as  Software Engineers. The level of this Coding Round was medium and not that easy. Every candidate has to solve atleast one question to be qualified for the next round. The coding round comprised of good set of questions which are as follows :

One person hands over the list of digits to Mr. String, But Mr. String understands only strings. Within strings also he understands only vowels. Mr. String needs your help to find the total number of pairs which add up to a certain digit D.The rules to calculate digit D are as follow :-

Take all digits and convert them into their textual representation.

Next, sum up the number of vowels i.e. {a, e, i, o, u} from all textual representation.

This sum is digit D

Now, once digit D is known find out all unordered pairs of numbers in input whose sum is equal to D. Refer example section for better understanding.

Number 100, if and when it appears in input should be converted to textual representation as hundred and not as one hundred. Hence number of vowels in number 100 should be 2 and not 4

The way this can be done is explained below:

2. Supporters of A can only move towards the left side of the queue.

3. Supporters of B can only move towards the right side of the queue.

4. Since time is critical, supporters of both A and B will move simultaneously.

7. Finally, if both reach at the same time, the voter will remain neutral. A neutral vote cannot decide the outcome of the election.

Refer Examples section for understanding the dynamics of how the supporters influence the neutral voters.

Your task is to find the outcome of the election.

Note: There are no test cases where all votes are neutral.

First line contains an integer which is length of queue of voters.

Second line contains characters {-, A, B}, in which denotes

· A = voter who is supporter of candidate A

· B = voter who is supporter of candidate B

A stock price is dynamic. Its value can change multiple times in a fraction of a second or remain unchanged for several minutes. Analyzing the dynamics of stock price change can provide an indication for forth coming uptrend or downtrend in that stock. One such indicator is simple moving averages. Now, Harry wants to analyze the price trend of the stock on the basis of moving averages (MA).

Help Harry in computing the number of uptrends and downtrends in the given time for which the data is provided. 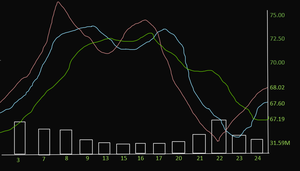 In this graph, there are three lines indicating stock closing price, moving average of two days and four days .Now we can see that between 13th and 15th there is an intersection. It is known as downtrend when moving average of fewer days is cutting downwards the more days moving average and vice versa.

Note2 – All the computation has to be accurate up to 6 digits after the decimal point.

Print the total number of times the stock will give uptrend or downtrend.

There are 4 circular grounds of equal sizes. Their circumferences do not intersect. The radius and the distance of the center of each circle from the leftmost circle’s center are given.

There are 4 joggers who can start at the same time from any of the points designated as { a, b, c, d } on the circumference of all the four circles as shown in the diagram below. All 4 joggers jog in different grounds along the circumference of that ground. They could jog in either clockwise (left to right) or anticlockwise (right to left) direction. Finally they may also jog at different speeds.

Given starting position, direction of jogging and speed of jogging of all the 4 joggers, find the summation of length of 3 segments between the four joggers at a given point in time since the start of the jog.

Note : All the computation has to be accurate up to 6 digits after the decimal point.

R denotes the radius of all four circles

Fifth Line contains integer N denoting the time in seconds since the start of the jog.

Print the summation of length of 3 segments between the four joggers after N seconds, rounded to the nearest integer.

Aman is a rich businessman who want to build a zoo. He wants to make enclosures for terrestrial and aquatic animals. Terrestrial animals will be of two types, namely herbivorous and carnivorous animals. So there will be three different enclosures.

Aman being a savvy businessman realizes that in order to minimize the cost of building the zoo without compromising on the attractions, he has to decide how much area to allocate to each animal type. Each animal type requires a certain area to thrive in. This in turn impacts the area allocation, which in turn has cost implications.

Your task is to help Aman workout the mathematics such that the zoo building cost is minimized subject to the following constraints:

For animals of a given type, the minimum area required is the same

Cost of fencing etc. is included in cost of enclosure

Exclude the essentials like pathways for tourists, from area and cost calculations

Consider all areas in square meters and cost in Rupees.

Second line contains three space separated integers denoting the maximum area that can be allocated to each type of animal viz. herbivorous, carnivorous and aquatic respectively

Next three lines, each will contain two space separated integers M and N, for each type of animal viz. herbivorous, carnivorous and aquatic respectively, where M denotes minimum number of animals of that type and N denotes minimum area required for that animal type

·The cost of constructing the enclosure for herbivores is high. However, since we need to accommodate 5 herbivores as per given constraints, a 25 sq. meter land will need to allocated for the herbivores.

·Since the cost of constructing the enclosure for carnivores is cheapest we are able to allocate them the maximum limit that we can allocate. Thus we are allocating 250 sq. meters for carnivores.

·The remaining 225 sq. meters can thus be allocated to aquatics without violating any constraint.

·Since the cost of constructing the enclosure for herbivores is cheapest we are able to allocate them the maximum limit that we can allocate. Thus we are allocating 250 sq. meters for herbivores.

·The cost of constructing the enclosure for aquatics is high. However, since we need to accommodate 10 aquatics as per given constraints, a 100 sq. meter land will need to allocated for the aquatic animals.

·The remaining 150 sq. meters can thus be allocated to carnivores without violating any constraint.