Tartaric acid comprises carbon, hydrogen, and oxygen with a molecular formula of C4H6O6. The structure consists of two -COOH and two hydroxy groups. Tartaric acid is a naturally occurring diprotic, alpha hydroxycarboxylic acid found in citrus, bananas, tamarind, and especially grapes. It exists in 3 stereoisomeric forms meso tartaric acid, D-(-)-tartaric acid, and L-(+)-tartaric acid. It played an important role in bringing the concept of chirality into the light. Pasteur was the first one who modernized the concept of stereoisomerism in producing pure Levo tartaric acid through manual sorting of sodium ammonium tartrate crystals whereas, whereas Jean Baptiste Biot noticed the ability of tartaric acid in rotating the plane-polarized light. Its naturally occurring form is used as raw material in many organic syntheses. It is otherwise called as 2,3-Dihyroxysuccinic acid or dihydroxybutanedioic acid. Important derivatives of tartaric acid-like Rochelle salt are used as a mild laxative and diisopropyl tartarate a diester of tartaric acid as a catalyst in asymmetric synthesis.

Tartaric acid is found naturally occurring in fruits. It is a white, crystalline organic acid. The formula for tartaric acid is C4H6O6. Lets now understand how the structure looks like, the properties and uses of tartaric acid. 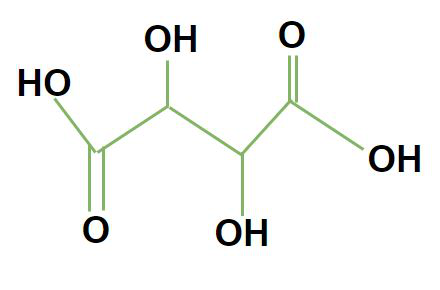 Question 1: Which stereoisomer of tartaric acid is optically inactive?

Meso form is optically inactive since it possesses a plane of symmetry, due to internal compensation one half of the molecule was mutually canceled by the other half.

D isomer rotates the plane polarised light towards the right, whereas L isomer towards left. Hence due to external compensation, there will be a mutual cancellation effect of two enantiomers making optical rotation zero.

Question 3: What is the role of tartaric acid in cake making?

Question 4: Tartaric acid reacts with NaOH in the following way

Find the mass of tartaric acid in gm required for 33.32ml of 2N NaOH for titration to equivalence point?

Question 5: How many stereoisomeric forms are possible for tartaric acid?

Question 6: What happens if tartaric acid reacts with Fenton’s reagent?

Question 7: What is Fenton’s reagent?

It is a solution of hydrogen peroxide and ferrous salt generally FeSO4. It is used as an analytical reagent, and catalyst in the oxidation of wastewater and contaminants. It can also be used to shatter certain organic compounds like tetra and trichloro ethylene.