Parser uses a CFG(Context-free-Grammar) to validate the input string and produce output for the next phase of the compiler. Output could be either a parse tree or an abstract syntax tree. Now to interleave semantic analysis with the syntax analysis phase of the compiler, we use Syntax Directed Translation.

Definition
Syntax Directed Translation has augmented rules to the grammar that facilitate semantic analysis. SDT involves passing information bottom-up and/or top-down to the parse tree in form of attributes attached to the nodes. Syntax-directed translation rules use 1) lexical values of nodes, 2) constants & 3) attributes associated with the non-terminals in their definitions.

The general approach to Syntax-Directed Translation is to construct a parse tree or syntax tree and compute the values of attributes at the nodes of the tree by visiting them in some order. In many cases, translation can be done during parsing without building an explicit tree.
Example

This is a grammar to syntactically validate an expression having additions and multiplications in it. Now, to carry out semantic analysis we will augment SDT rules to this grammar, in order to pass some information up the parse tree and check for semantic errors, if any. In this example, we will focus on the evaluation of the given expression, as we don’t have any semantic assertions to check in this very basic example.

Let’s take a string to see how semantic analysis happens – S = 2+3*4. Parse tree corresponding to S would be

To evaluate translation rules, we can employ one depth-first search traversal on the parse tree. This is possible only because SDT rules don’t impose any specific order on evaluation until children’s attributes are computed before parents for a grammar having all synthesized attributes. Otherwise, we would have to figure out the best-suited plan to traverse through the parse tree and evaluate all the attributes in one or more traversals. For better understanding, we will move bottom-up in the left to right fashion for computing the translation rules of our example. 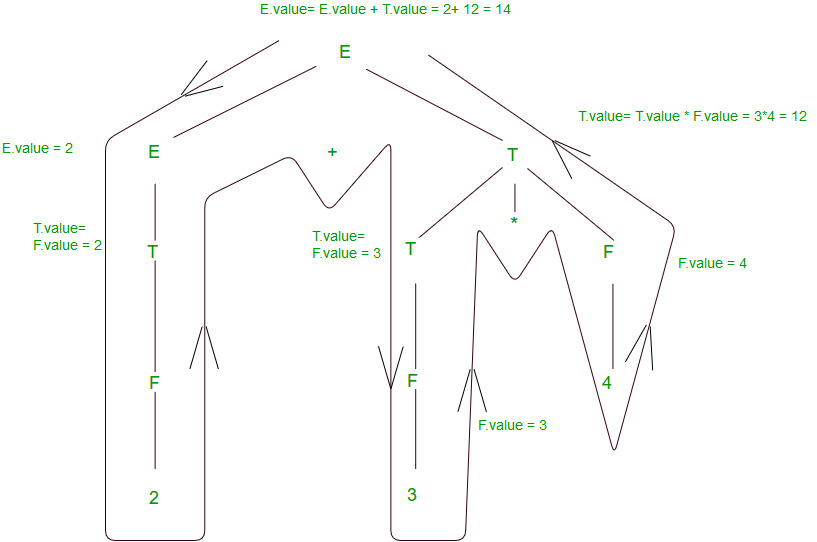 The above diagram shows how semantic analysis could happen. The flow of information happens bottom-up and all the children’s attributes are computed before parents, as discussed above. Right-hand side nodes are sometimes annotated with subscript 1 to distinguish between children and parents.
Additional Information
Synthesized Attributes are such attributes that depend only on the attribute values of children nodes.
Thus [ E -> E+T { E.val = E.val + T.val } ] has a synthesized attribute val corresponding to node E. If all the semantic attributes in an augmented grammar are synthesized, one depth-first search traversal in any order is sufficient for the semantic analysis phase.

Inherited Attributes are such attributes that depend on parent and/or sibling’s attributes.
Thus [ Ep -> E+T { Ep.val = E.val + T.val, T.val = Ep.val } ], where E & Ep are same production symbols annotated to differentiate between parent and child, has an inherited attribute val corresponding to node T.